Confessions of a Stone Turner 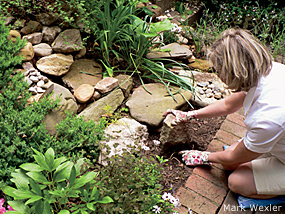 DIRT BOILS WITH LIFE. Roots, nematodes, ants, termites, worms, moles, voles and snakes tunnel underground. They search one another out in the dark, chasing mates and food by touch and scent. This subterranean world is nearly invisible to us. We see it in glimpses: A mole falls out of a clay bank and we pick it up in the road, or we dig a hole and watch as unearthed insects scramble to disappear.

The soil is also one of the least-known habitats on Earth. Even underneath a suburban lawn, most organisms are unstudied, and many are unnamed. The citronella-scented orange ant Acanthomyops claviger, for example, is one of the most abundant ants in the northeastern United States. But because it only comes above ground once a year to mate, nearly nothing is known about the species. Only a handful of corpulent queens have ever been seen. Each has been revealed by the lucky turn of a stone or log.

Turning rocks and peering beneath them provides a window into the underground world. Turn a rock in your garden, and if you have chosen your rock well, you will see a cross section of what occurs everywhere beneath you. For an instant, as tunnels are unveiled, you can savor a moment in the life of a soil organism. It is indeed just a moment, because ants soon hurry to hide their brood. Earwigs scurry beneath litter. Springtails hop away. It is nonetheless one of the best ways to learn about the daily lives of what lives beneath you.

You could travel the world turning rocks—or bring the subterranean world home by “planting” them in your backyard (see tips below). When my wife and I moved to Connecticut, our 12-foot-by-12-foot yard contained exactly two barberry bushes, a large hydrangea and 20 or so species of weeds that when clipped short resembled a lawn. In the center were two small patches of flowers and vegetables. By the time we left two years later, the yard also contained several hundred rocks, and under each of them a menagerie of miniature life-forms.

Planting rocks for soil-dwelling insects is not unlike planting flowers for butterflies. The more rocks you plant, the more you will enrich the community of soil dwellers around you. Any rock or stone is better than none, but underground denizens do have preferences. Chipmunks might like a tall rock wall filled with holes and history, but most ants and their six-legged kin would rather have a field of cobblers laid flat. Under a good, sun-warmed rock, ants, for example, will bring their brood up to take in the heat. Even the queen might rise from her deep hole to warm herself on the underside of a well-planted stone.

Most soil insects seem to prefer a rock with some texture rather than a smooth rock. As for size, a stone about a foot across seems ideal. Anything bigger is hard to turn, and anything smaller is too small for most insects to make use of.

After you plant a rock, ants and other soil organisms may not move in immediately, but sooner or later they are almost guaranteed to show up. If the ground is softened beneath the stone before it is placed, the roots removed, and the grass and weeds extracted, insects will arrive more quickly. (Don’t put plastic beneath the stones.)

Before you see any animals themselves, you will likely see their trailings, tunnels and holes, frass, bits of silk and garbage (often bits of insect bodies that glimmer like small gems). We know next to nothing about how insects dispose of their garbage or build tunnels, so watch carefully and you’re bound to learn something no one else knows.

In my own yard, I found mites, termites, earwigs, earthworms, several dozen species of beetles, silverfish, aphids and, occasionally, even a red-backed salamander or a diminutive Dekay’s snake under my rocks.

It’s tempting to turn over rocks often to see what’s going on beneath them, and as long as the stones are carefully replaced, it’s not likely to affect the organisms beneath them. I for one have a regular rock-checking circuit, through my own yard and then out around the neighborhood. I’ve watched individual ant colonies beneath rocks for many years. I’ve seen the composition of communities change as invasive species arrived. I’ve seen good and bad years for various species.

Occasionally, I find real jewels: A few weeks before we moved away from Connecticut, I discovered a mite riding an ant from one of the colonies in my front yard. This particular mite only rides atop this kind of ant. Then, a week before we left, I saw a mated queen of an ant species, Camponotus castaneus, that I had never seen within the city. She probably would not have settled in the yard had I not planted rocks. Time will tell whether she and the colony she begins fade or flourish. When we return to Connecticut some day, her rock will be one of the first things I check.

Robert Dunn is a postdoctoral fellow in the Department of Ecology and Evolutionary Biology at the University of Tennessee, where he is studying the ants of Great Smoky Mountains National Park.

Choose flat stones that have texture; the best rocks for planting are about a foot across.

Soften soil and remove grass and weeds before placing rocks.

Never put plastic beneath the stones.

After turning a rock, carefully replace it just as you found it.
RELATED RESOURCES