In a strange hunting technique, bottlenose dolphins in Georgia and South Carolina waters not only drive fish ashore but throw themselves onto land to collect prey 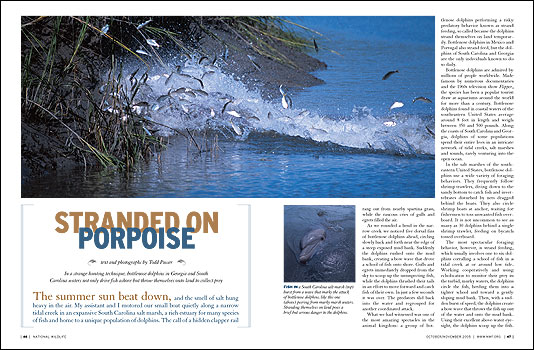 THE SUMMER SUN beat down, and the smell of salt hung heavy in the air. My assistant and I motored our small boat quietly along a narrow tidal creek in an expansive South Carolina salt marsh, a rich estuary for many species of fish and home to a unique population of dolphins. The call of a hidden clapper rail rang out from nearby spartina grass, while the raucous cries of gulls and egrets filled the air.

As we rounded a bend in the narrow creek we noticed five dorsal fins of bottlenose dolphins ahead, circling slowly back and forth near the edge of a steep exposed mud bank. Suddenly the dolphins rushed onto the mud bank, creating a bow wave that drove a school of fish onto shore. Gulls and egrets immediately dropped from the sky to scoop up the unsuspecting fish, while the dolphins thrashed their tails in an effort to move forward and catch fish of their own. In just a few seconds it was over. The predators slid back into the water and regrouped for another coordinated attack.

What we had witnessed was one of the most amazing spectacles in the animal kingdom: a group of bottlenose dolphins performing a risky predatory behavior known as strand feeding, so called because the dolphins strand themselves on land temporarily. Bottlenose dolphins in Mexico and Portugal also strand feed, but the dolphins of South Carolina and Georgia are the only individuals known to do so daily.

Bottlenose dolphins are admired by millions of people worldwide. Made famous by numerous documentaries and the 1960s television show Flipper, the species has been a popular tourist draw at aquariums around the world for more than a century. Bottlenose dolphins found in coastal waters of the southeastern United States average around 8 feet in length and weigh between 350 and 500 pounds. Along the coasts of South Carolina and Georgia, dolphins of some populations spend their entire lives in an intricate network of tidal creeks, salt marshes and sounds, rarely venturing into the open ocean.

Some Orcas Favor Beach Dining, Too

Every year, about a dozen orcas come to the beaches of Punta Norte, along Argentina's Patagonian shore, to hunt young sea lions born there in January and February. They attack at speeds up to 40 miles per hour, driving the sea lions toward shore. About one out of five attacked sea lions becomes orca food as the massive dolphins thrust half or more of their bodies on the beach to snatch their prey. Younger orcas do not seem to be adopting this strategy, which may disappear as older animals die off.

In the salt marshes of the southeastern United States, bottlenose dolphins use a wide variety of foraging behaviors. They frequently follow shrimp trawlers, diving down to the sandy bottom to catch fish and invertebrates disturbed by nets dragged behind the boats. They also circle shrimp boats at anchor, waiting for fishermen to toss unwanted fish overboard. It is not uncommon to see as many as 30 dolphins behind a single shrimp trawler, feeding on bycatch tossed overboard.

The most spectacular foraging behavior, however, is strand feeding, which usually involves one to six dolphins corralling a school of fish in a tidal creek at or around low tide. Working cooperatively and using echolocation to monitor their prey in the turbid, murky waters, the dolphins circle the fish, herding them into a tighter school and toward a gently sloping mud bank. Then, with a sudden burst of speed, the dolphins create a bow wave that throws the fish up out of the water and onto the mud bank. Using their excellent above-water eyesight, the dolphins scoop up the fish. For reasons still obscure to science, they always strand on their right sides, and, over time, the teeth on the right sides of their jaws wear down from taking in as much abrasive mud as fish.

Occasionally, a hunting dolphin will become overeager and strand itself completely out of water. By thrashing hard, it can usually work its way backward into the water. If stranded for a long period of time, a dolphin can suffer internal injuries as well as potentially lethal exposure to the sun.

Once back in the water, the dolphins regroup, corral more fish and strand themselves again. They usually repeat this behavior many times during the few hours around low tide, when the muddy banks of the narrow tidal channels are exposed. Young dolphin calves learn this risky behavior by watching their mothers, though they rarely participate in strandings. 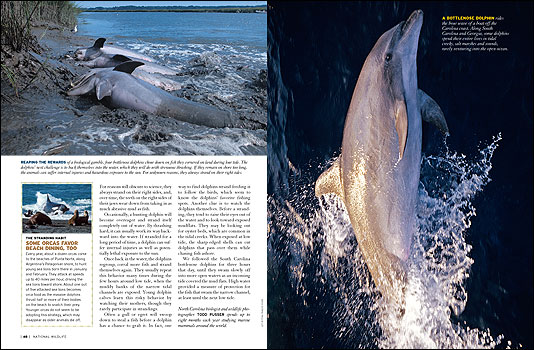 Often a gull or egret will swoop down to steal a fish before a dolphin has a chance to grab it. In fact, one way to find dolphins strand feeding is to follow the birds, which seem to know the dolphins' favorite fishing spots. Another clue is to watch the dolphins themselves. Before a stranding, they tend to raise their eyes out of the water and to look toward exposed mudflats. They may be looking out for oyster beds, which are common in the tidal creeks. When exposed at low tide, the sharp-edged shells can cut dolphins that pass over them while chasing fish ashore.

We followed the South Carolina bottlenose dolphins for three hours that day, until they swam slowly off into more open waters as an incoming tide covered the mud flats. High water provided a measure of protection for the fish that swam the narrow channel, at least until the next low tide.