Strangers in a Native Land

To rescue what remains of New Zealand's indigenous birdlife, scientists are stranding survivors on predator-free islands 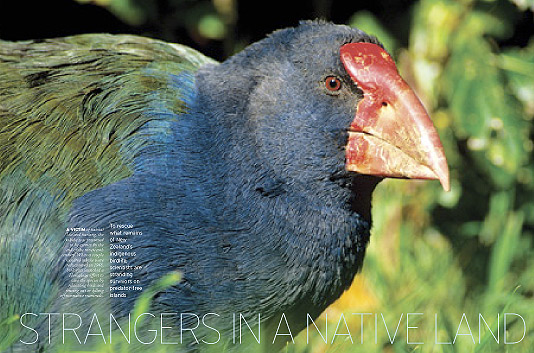 To literally watch the extinction of a species is to experience a "defining moment," as Don Merton puts it in his understated Kiwi way. Merton was a junior wildlife officer when that moment occurred in 1964 on Big South Cape, a remote, peat-covered island off New Zealand’s southern mainland. The island had been a last refuge for several endemic animals, but that changed overnight after rats swam ashore from a fishing boat docked offshore. By the time the wildlife service could mount a rescue mission, four winged species were down to a handful of individuals each. The only hope was a speedy translocation to predator-free habitat, a brand-new strategy at the time.

After capturing and securing some of the animals in cages, Merton and his colleagues waited for a Navy launch to pick them up. But winter storms delayed a landing for many days. For one bird species, the South Island saddleback, the rescue came just in the nick of time. But it was too late to save two other birds, the Steads bush wren and the Stewart Island bush snipe—along with a mammal, the greater short-tailed bat—all four found nowhere else in the world.

The event was New Zealand’s worst ecological disaster in recent history. But a slow-motion version of Big South Cape’s collapse has been playing out throughout the country since the first human settlers arrived nearly 1,000 years ago. For 80 million years before that, the island’s extreme isolation had given rise to a unique assortment of biological oddities. One key reason was the absence of terrestrial mammals. Free from the predators, dozens of bird species evolved to become flightless, or nearly so, ground-nesting or fearless of other animals. Many, like the six-foot moa and the downy-feathered kiwi, acquired mammalian traits. But when real mammals—people and the creatures they introduced—started arriving, the birds were defenseless in the face of hunting, predation and habitat destruction. Since then, New Zealand has lost nearly half its native land bird species.

One survivor is the takahe. The largest living member of the rail family, it looks like a large hen in flashy blue and green drag. Except for a formidable red beak, everything about the species, from its undersized wings to its fearlessness around humans, suggests vulnerability. 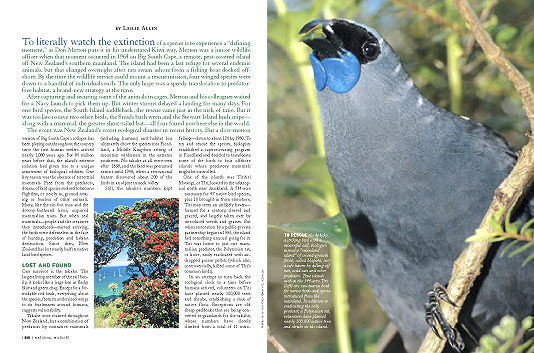 Takahe once roamed throughout New Zealand, but a combination of predation by nonnative mammals (including humans) and habitat loss ultimately drove the species into Fiordland, a Middle Kingdom setting of mountain wilderness in the extreme southwest. No takahe at all were seen after 1898, and the bird was presumed extinct until 1948, when a recreational hunter discovered about 200 of the birds in an alpine tussock valley.

Still, the takahe’s numbers kept falling—down to about 120 by 1980. To try and rescue the species, biologists established a captive-rearing program in Fiordland and decided to translocate some of the birds to four offshore islands where predatory mammals might be controlled.

One of the islands was Tiritiri Matangi, or Tiri, located in the subtropical north near Auckland. A 544-acre sanctuary for 47 native bird species, plus 10 brought in from elsewhere, Tiri may seem an unlikely haven—farmed for a century, cleared and grazed, and largely taken over by introduced weeds and grasses. But when restoration by a public-private partnership began in 1983, the island had something unusual going for it: Tiri was home to just one mammalian predator, the Polynesian rat, or kiore, easily eradicated with air-dropped poison pellets (which also, controversially, killed some of Tiri’s common birds).

In an attempt to turn back the ecological clock to a time before humans arrived, volunteers on Tiri have planted nearly 300,000 trees and shrubs, establishing a mix of native flora. Exceptions are old sheep paddocks that are being converted to grasslands for the takahe, whose numbers have slowly climbed from a total of 11 introduced the early 1990s, to some 20 today.

Most of Tiri’s translocated birds are doing well enough that researchers are starting to study their population dynamics. "It’s all still new, but there’s already a big shift from just putting birds on an island to a lot of study to see why things succeed or fail," says biologist Rosalie Stamp of the Department of Conservation. One mystery concerns the takahe: While more adults survive on offshore sanctuaries, hatching failures are twice as high as on the mainland.

New Zealand is a land of biological refugees. Fortunately, "we have a good solution with hundreds of islands and, recently, good methods to eradicate pests on them, so we can maroon birds safely," says Merton, who has played a key role in the rescue of several endangered birds around the world. Since Big South Cape, he and his colleagues have translocated nearly 50 New Zealand bird species to some 80 islands. Because their populations are now extinct on the mainland, five of these species exist only because of the island transfers. 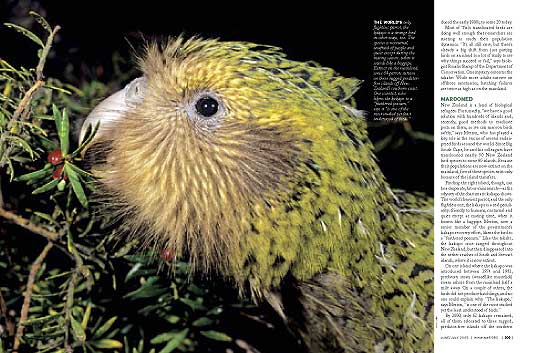 Finding the right island, though, can be a desperate, hit-or-miss search—as the odyssey of the charismatic kakapo shows. The world’s heaviest parrot, and the only flightless one, the kakapo is a real peculiarity: friendly to humans, nocturnal and quiet except at mating time, when it booms like a bagpipe. Merton, now a senior member of the government’s kakapo recovery effort, likens the bird to a "feathered possum." Like the takahe, the kakapo once ranged throughout New Zealand, but then disappeared into the nether reaches of South and Stewart islands, where it is now extinct.

On one island where the kakapo was introduced between 1974 and 1981, predatory stoats (weasellike mustelids) swam ashore from the mainland half a mile away. On a couple of others, the birds did not produce hatchlings, and no one could explain why. "The kakapo," says Merton, "is one of the most studied yet the least understood of birds."

By 2000, only 62 kakapo remained, all of them relocated to three rugged, predator-free islands off the southern mainland. New Zealanders held their collective breath, and in 2002, the stars aligned as an exceptionally heavy fruiting of native rimu trees triggered a spectacular breeding season on one island. In a single season, the world population of kakapo rose by 39 percent, to 86.

Ironically, that heartening success has created a new concern: crowding. "Kakapo have quite large habitat requirements," explains Clare Miller, a recovery program biologist. "Two of the islands are now full." The New Zealand Department of Conservation is urgently searching for other suitable, rimu-forested islands; but so far, all likely candidates are within swimming distance of stoats from the mainland.

The $64 question is whether the birds can ever be reintroduced to the mainland. "At the present time, we don’t have the tools to keep predators out," answers the normally upbeat Merton. "We wonder if we ever will."

While the vulnerable kakapo hovers on the brink, risking even one pair to a trial on the mainland is out of the question. But for a few other species, the experiment has already begun on a handful of "mainland islands." At one extreme is the privately-funded Karori Wildlife Sanctuary, near downtown Wellington, New Zealand’s capital. There, a multimillion-dollar predator-proof fence more than five miles long keeps unwanted mammals out of this 623-acre refuge for native species, including nearly four dozen birds. At the other extreme, a few larger, unfenced tracts of forest are testing the limits of lessons learned offshore. 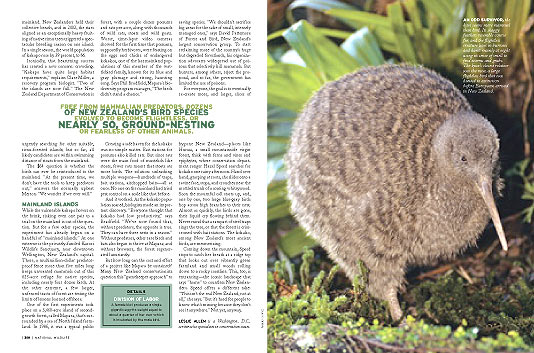 One of the first experiments took place on a 3,460-acre island of second-growth forest, called Mapara, that’s surrounded by a sea of North Island farmland. In 1986, it was a typical public forest, with a couple dozen possums and rats per acre, along with thousands of wild cats, stoats and wild goats. Worse, time-lapse video cameras showed for the first time that possums, supposedly herbivores, were feasting on the eggs and chicks of endangered kokakos, one of the last mainland populations of this member of the wattlebird family, known for its blue and gray plumage and strong, haunting song. Says Phil Bradfield, Mapara’s biodiversity program manager, "The birds didn’t stand a chance."

Creating a safe haven for the kokako was no simple matter. Bait stations for possums also killed rats. But since rats were the main food of mustelids like stoats, fewer rats meant that stoats ate more birds. The solution: unleashing multiple weapons—hundreds of traps, bait stations, airdropped baits—all at once. No one on the mainland had tried pest control on a scale like that before.

And it worked. As the kokako population soared, biologists made an important discovery. "Everyone thought that kokako had low productivity," says Bradfield. "We’ve now found that, without predators, the opposite is true. They can have three nests in a season." Without predators, other rare birds and bats also began to thrive at Mapara; and without browsers, the forest regenerated luxuriantly.

But how long can the cost and effort of a project like Mapara be sustained? Many New Zealand conservationists question this "gamekeeper approach" to saving species. "We shouldn’t sacrifice big areas for the sake of small, intensely managed ones," says David Pattemore of Forest and Bird, New Zealand’s largest conservation group. To start reclaiming more of the country’s huge but degraded forestlands, his organization advocates widespread use of poisons that selectively kill mammals. But hunters, among others, reject the proposal, and so far, the government has limited the use of poisons.

For everyone, the goal is to eventually re-create more, and larger, slices of bygone New Zealand—places like Hunua, a small mountainside virgin forest, thick with ferns and vines and epiphytes, where conservation department ranger Hazel Speed searches for kokako one rainy afternoon. Hand over hand, grasping at roots, she slides onto a ravine face, stops, and crouches near the mottled trunk of a soaring whiteywood. Soon the mournful call starts up, and, one by one, two large blue-gray birds hop across high branches to their nest. Almost as quickly, the birds are gone, their liquid cry flowing behind them. Never mind that a rampart of steel traps rings the tree, or that the forest is crisscrossed with bait stations. The kokako, among New Zealand’s most ancient birds, are mesmerizing.

Coming down the mountain, Speed stops to catch her breath at a ridge top that looks out over vibrantly green farmland and small woods rolling down to a rocky coastline. This, too, is entrancing—the iconic landscape that says "home" to countless New Zealanders. Speed offers a different take: "This isn’t the real New Zealand, not at all," she says. "But it’s hard for people to know what’s missing because they don’t see it anywhere." Not yet, anyway.

Leslie Allen is a Washington, D.C., writer who specializes in conservation issues.