Which species do top U.S. birders most want to see? Here are the results of our informal survey

When Vern Laux saw the bird chasing dragonflies over the airport on Martha’s Vineyard, he initially wrote it down as an "immature Mississippi kite." But after close examination, the sleek gray bird turned out to be a red-footed falcon, or as Laux later called it, "the bird of the century."

Ordinarily, this falcon breeds in eastern Europe and winters on African savannahs. Until that day last August when Laux spotted it on the Massachusetts island, the species had never been sighted in the Western Hemisphere. Soon, as word of the bird spread over the Internet and the media, the ferry from the mainland was jammed with serious birders. They were attracted, as one local newspaper put it, by "the biggest celebrity since Bill Clinton vacationed here."

The falcon lingered on the Vineyard for days, perching in the open on a runway sign as pilgrims streamed in from as far away as Alaska. Ultimately, an estimated 10,000 birders ventured to the island. One of them made a particularly strong impression on Laux.

"The guy looked terrible," he recalls. "His eyes were bloodshot, he was tired. Turns out he was from Florida and his house had just been destroyed by a hurricane."

The man told Laux that only his binoculars and spotting scope were spared. Sitting in his wrecked house, he said to himself, "Heck with it, I’m going for the falcon." The Floridian jumped into his car, drove north nonstop and got on the first ferry he could find. "I’ll never forget when he finally saw the bird," adds Laux. "His whole demeanor changed. His eyes lit up and he was so happy!" 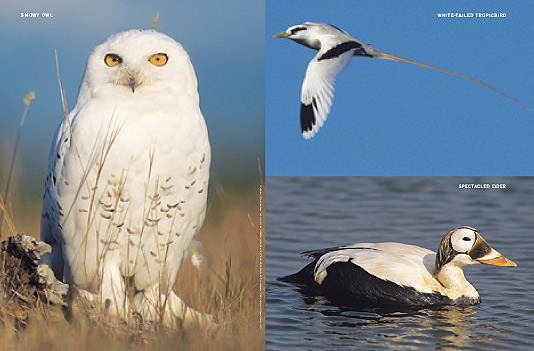 Millions of Americans regularly experience the same sort of joy, simply by seeing a rare bird. According to a U.S. Fish and Wildlife Service survey, there are 46 million bird-watchers in this country—people who are willing to travel a mile or more from home just to look at birds. Of these, more than 10 percent are serious birders—willing to go farther (much farther!) to add a new species to their life lists.

How far? Kenn Kaufman, a well-known author of several bird books, including the Peterson Field Guide to Advanced Birding, dropped out of high school at age 16 to devote all of his time to looking at feathered creatures. Hitchhiking around the country, he racked up 80,000 miles in a single year, eking out his meager budget, he says, by eating Little Friskies pet food.

Cross-continental birding is a lot easier if you have plane fare, though not necessarily more rewarding. Consider the time a few years ago when a lesser whitethroat—a Eurasian species—showed up on a tiny island in the Bering Sea off Alaska. Paul Lehman, a bird tour leader for Wings Inc., recalls how a friend became determined to add the bird to his North American list. "He jumped on a plane in New Jersey, flew to Anchorage, got another plane to Nome and then took a little plane to the island," says Lehman. "Well, the bird stayed two days, and he got there on day three."

When it comes to challenging conditions, not many enthusiasts can match the lengths Ned Brinkley has gone to see unusual species. The editor of North American Birds used to load his binoculars and chain saw into his four-wheel-drive truck and chase hurricanes along the Eastern seaboard, intentionally heading into the eye of a storm in search of vagrant birds blown off course by the winds. "Sometimes officials make you evacuate, and that really puts a crimp in the birding," he says. Why the chain saw? "Driving into Hurricane Fran a few years ago, trees were falling everywhere across Interstate 85 South," he answers, adding: "It was a little scary. I don’t really want to encourage other people to do this." 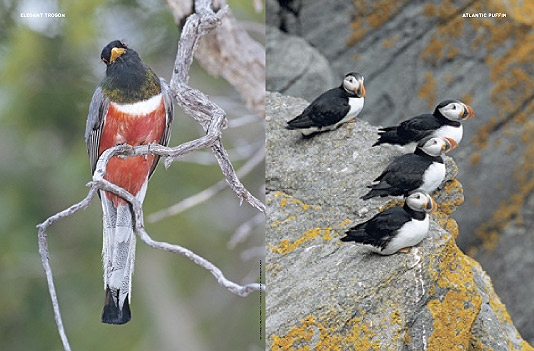 What motivates people to go to such extremes? For some, it’s the competitive drive to build a big life list of species; for others, it’s simply the allure of seeing unusual birds. We asked some of the country’s elite birders to tell us which ten species they most yearn to see within the United States. Clearly, most of them didn’t want to be limited to the Lower 48. "Alaska is the only place to see a whole lot of great birds," says Lehman. Based on his response and the others we received, here is our unscientific list of America’s ten most wanted:

1. An Alaskan species that topped many of the birders’ lists was the spectacled eider, which is alluring in part because of the male’s flashy breeding plumage: white "goggles" on a chartreuse head. But like some hard-core birders, this species also shrugs at tough conditions. While most birds are flying south, spectacled eiders head for the middle of the Bering Sea, wintering in openings in the sea ice.

Biologist Gerrit Vyn is one of the lucky few who has seen spectacled eiders in the wild—on their summer breeding grounds in coastal Alaska, while doing a survey for an oil company. He was flown to the site in a helicopter, but don’t get too jealous. "They dropped us off wearing heavy backpacks," he says, "in waist-deep cold water, amid clouds of mosquitoes."

2. When a vagrant Ross’s gull shows up in the Lower 48, as one did on Plum Island off Massachusetts several years ago, birders rush to see it. Another High Arctic species, "Ross’s gull just has this mystery about it," says Lehman. The bird has a circumpolar distribution, wintering above the Arctic Circle and rarely breeding farther south than northern Manitoba.

3. The ivory gull is another Far North species that the birders we questioned want to see. The world’s only pure white gull, it winters at the edge of pack ice in Arctic waters and breeds only in remote parts of northern Canada.

4. Many birders also long to see a white morph of gyrfalcon, a variety of the raptor that normally only inhabits parts of northern Canada and Greenland. When one of them showed up in the Lower 48 not long ago, Ted Floyd, editor of Birding magazine, couldn’t pass up the opportunity. He drove hundreds of miles from his home in Colorado to South Dakota to see the animal. "It wasn’t even my first," he recalls.

Vyn hasn’t been as fortunate. "I made five or six trips from Michigan to Ontario in winter, just to stand on a cold windy lakeshore in pelting rain—and I never saw one." While in Alaska, the biologist heard about another white gyrfalcon. "I drove 400 miles on a bad road and missed that one too," he says. 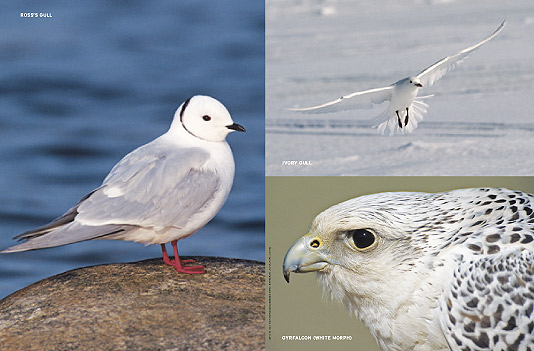 5. The snowy owl, another white Arctic species, ranks high on many "must see" lists. The largest (or at least heaviest) North American owl, it flies south periodically into the Lower 48 during the cold months when food is in short supply. This past winter, in fact, was a good year to see them south of the Canadian border. (Some respondents rated another northern owl, the great gray, ahead of the snowy on lists.)

6. "For many birders, seeing your first albatross is a big deal," says Floyd. What’s the allure? "They have very long, narrow wings, they are incredible flyers, and if you want to see one, you have to get on a boat and go far out to sea," adds Lehman.

The world’s second largest population of the black-footed albatross breeds in remote Midway Atoll at the far northwestern end of the Hawaiian island chain. It is the only albatross that is seen regularly off the U.S. West Coast—but only if you venture out from the mainland 15 or 20 miles by boat.

7. Most experienced birders lust for a glimpse of a white-tailed tropicbird, which comes ashore only briefly to nest on remote islands in the Caribbean and other tropical areas. "They’re just spectacular," says Floyd, "ghostly white with these incredible tail streamers." Your best bet to see one near the Lower 48 is to take a pelagic trip off the coasts of North Carolina or Florida.

8. "Everyone loves puffins," says Linda McCauley, a board member at the Cornell University Lab of Ornithology. Of the world’s four species, the Atlantic puffin is the easiest to see in this country, outside of Alaska. Colonies breed on islands off Maine. If you don’t see a puffin there, adds Vyn, "you have to travel far by air—and then you have to get on a boat."

9. The appeal of the elegant trogon is obvious: It’s a rare sight in this country and it has gorgeous plumage, which actually provides effective camouflage in the shady Arizona canyons that are its only U.S. hangout. Birders most often locate the species not by sight but by its croaking calls.

10. Though the striking ivory-billed woodpecker was long considered extinct, birders continued to hold out hope that they might see it. Now, with the announcement in April by the U.S. Fish and Wildlife Service that there have been several sightings of ivorybills in bottomland hardwood habitat in Arkansas, the species is the talk of the birding world.

This top ten list, of course, might not match your own yearnings. Other often-mentioned species include the whooping crane and Kirtland’s warbler (both endangered); the greater roadrunner (for its cartoonlike appearance); the American dipper (for its odd behavior of slipping into streams and walking underwater); and the Bachman’s warbler (like the ivorybill, thought to be extinct).

That’s the beauty of birding—so many fascinating birds, and so many ways to put them on lists. Ned Brinkley has some parting advice: Keep the hunt for special birds in perspective. "Birds have wings and can fly away," he says. "So it doesn’t make sense to feel crushed if you miss one."

Writer Cynthia Berger lives in Pennsylvania. Which birds do you most long to see within U.S. territory? Send us your list of species. We’ll compile the results and publish them in a future issue of the magazine. You’ll find our email and mailing address in "[Reader’s View]."