The Curious Case of the Cannibal Squid

Jumbo-sized Humboldt squid, which feed on fish and each other, are invading the Gulf of California as sharks and other predators dwindle 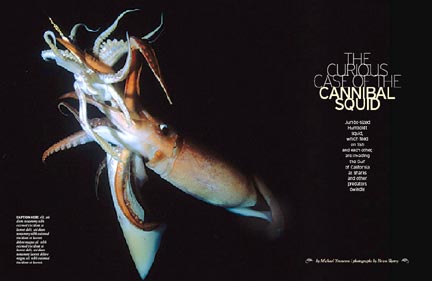 A HUMBOLDT SQUID attacks and begins eating one of its own kind, hooked by a fisherman in the Sea of Cortez. This squid, which commonly eats injured members of its own species, has been appearing in the sea in increasing numbers as other predators vanish.

A SUMMER BREEZE carries the scent of sea salt and marine life across the warm waters of the Sea of Cortez as biologist William Gilly, of California’s Stanford University, boards a 50-foot dive boat to search for Humboldt squid. Behind him, in evening’s fading light, lies the town of Santa Rosalia, established by a French mining company in the late 1800s on the eastern shore of Mexico’s Baja California. The people of Santa Rosalia now mine the sea for a different treasure, the Humboldt squid.

Gilly’s boat is soon skipping over swells as it heads for a deep spot off rocky San Marcos Island. The sky has darkened as the boat slows to a stop in a place surrounded by open fiberglass panga boats, in which Mexican fishermen use hand lines and fluorescent jigs to go after squid. Gilly and his associates use their own lines and jigs to capture squid for tagging. Many of the tags are simple bands, but some are transmitters that record temperature and depth, information that is helping the scientists to develop a picture of Humboldt squid activity.

Once the boat is anchored, Gilly goes over the side with mask and snorkel. Almost instantly, a group of three or four man-sized squid with huge, predatory eyes hover below him. Gilly gazes in wonder at the strange animals but is startled as they abruptly shoot their tentacles his way. He has seen them reach out like this before, but only to attack prey. To his surprise, the reaching squid gently touch his hand. "First one did it and then withdrew, and then the others," Gilly recalls. "They taste with their tentacles. I guess I didn’t taste that good." 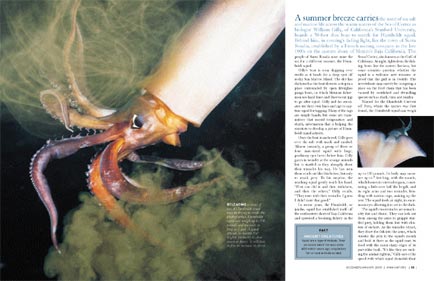 RELEASING A CLOUD of ink, a Humboldt squid may be trying to evade the photographer. Humboldt squid can weigh up to 100 pounds and measure as long as 7 feet. A squid spreads its mantle fins (right), probably to slow down or hover. It will fold its fins to increase its speed.

In recent years, the Humboldt, or jumbo, squid has established itself off the southeastern shore of Baja California and spawned a booming fishery in the Sea of Cortez, also known as the Gulf of California. At night, lights from the fishing boats line the eastern horizon, but some scientists question whether the squid is a welcome new resource or proof that the gulf is in trouble. The invertebrate may merely be occupying a place on the food chain that has been vacated by overfished and dwindling species such as shark, tuna and marlin.

Named for the Humboldt Current off Peru, where the species was first found, the Humboldt squid can weigh up to 100 pounds. Its body may measure up to 7 feet long, with the mantle, which houses its internal organs, constituting a little over half the length, and its eight arms and two tentacles, bristling with suction cups, making up the rest. The squid feeds at night, its enormous eyes allowing it to see in the dark.

Squid are a type of mollusk. Their ancestors swam the seas some 400 million years ago, long before fish or land animals existed.

The squid’s two tentacles are remarkably fast and elastic. They can lash out from among the arms to grapple startled prey, holding them fast with clusters of suckers. As the tentacles retract, they draw the fish into the arms, which wrestle the prey to the squid’s mouth and hold it there as the squid tears its food with the razor-sharp edges of its parrotlike beak. "It’s like they are sucking the animal right in," Gilly says of the speed with which squid demolish their prey. "But they leave the bone. I don’t believe they have the jaw muscles to crush through it. Fishermen have been bitten by the squid, but I have never heard of a serious accident."

Humboldt squid can feed with amazing speed, even stripping clean a hooked fish before an angler can reel it, says Roger Hanlon, senior scientist at the Marine Biological Laboratory in Woods Hole, Massachusetts. The fiercest of all the cephalopods, a group that comprises squid, octopus and cuttlefish, the Humboldt is notoriously cannibalistic. "As soon as one of their fellow squids gets hooked, and they can see it is caught or behaving differently, they attack it and start chomping away" Hanlon says.

Unai Markaida, a marine biologist at the Colegio de la Frontera Sur research center in Campeche, Mexico, analyzed the stomach contents of 533 Humboldt squid and found evidence of cannibalism in 26 percent of them. The bigger the squid, the more it ate other Humboldts. Females, which grow slightly larger, resort to cannibalism more often than do males.

All squid are capable of moving with incredible bursts of speed. They draw water into the mantle or body and then eject this water through a spout or funnel that can thrust them at lighting speed over short distances to avoid predators or to capture prey.

They are agile as well as fast. "They can move forward or backward, left or right, and make changes in midcourse," Gilly says. "They can certainly outmaneuver a fish."

Each squid has three hearts, blue blood and a brain large enough to suggest that squid are among the most intelligent invertebrates.

All squid have the ability to change color rapidly. Some smaller squid can mimic rock or coral with colored patterns and textures. Humboldt squid lack this patterning ability but can be maroon or ivory or any tone in between, and they can change color several times a second, pulsing like a strobe. They will occasionally pulse at one another, particularly while feeding. According to Gilly, "There’s jitter, variation and change in the frequency between two squid. It’s highly unlikely this isn’t some kind of communication." Whatever they are communicating, whether aggression, sexual readiness or something else entirely, will remain a mystery until further study.

Gilly and Markaida, who have tagged 2,000 Humboldt squid in the Sea of Cortez, have learned that during the day the squid dive to about 1,000 feet and stay there all day. "The amazing thing is that this is the oxygen-minimum layer, where the oxygen in the water goes down to almost zero," Gilly says. "Seals and whales may dive there for short bursts, but they hold their breath. The squid hang out there for hours, and they have to breathe. But there’s no oxygen, so what are they doing?" Gilly is looking for funding to send down low-light cameras to see how the squid are coping. So far it’s a mystery. At night, the squid prefer depths above 200 feet, where there is plenty of oxygen in the water.

Long common off the coast of South America, Humboldt squid moved into the Sea of Cortez in the 1970s and have developed into one of Mexico’s leading fisheries, with about 120,000 metric tons of squid taken in 1997. Most of it is sold to China or Korea, where it is a staple food. 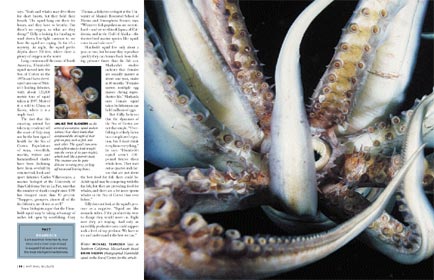 UNLIKE THE SUCKERS on the arms of an octopus, squid suckers (left) bear sharp hooks that compound the strength of their grip on prey such as fish, and each other. The squid’s arms and tentacles lead straight into the vortex of its jaws (right), which look like a parrot’s beak. The creature can be quite delicate in eating prey, picking off meat and leaving bones.

The fact that this amazing animal has taken up residence off the coast of Baja may not be the best sign of health for the Sea of Cortez. Populations of tuna, swordfish, marlin, wahoo and hammerhead sharks have been declining here from overkill by commercial, local and sport fisheries. Carlos Villavicencio, a marine biologist at the University of Baja California Sur in La Paz, says that the number of sharks caught since 1990 has dropped more than 40 percent. "Snappers, groupers, almost all of the fin fisheries, are down as well."

Some biologists argue that the Humboldt squid may be taking advantage of niches left open by overfishing. Gary Thomas, a fisheries ecologist at the University of Miami’s Rosenstiel School of Marine and Atmospheric Science, says, "Whenever fish populations are overutilized—and we see this off Japan, off California, and in the Gulf of Alaska—the shorter-lived marine species, like squid, come in and take over."

Humboldt squid live only about a year or two, but because they reproduce quickly they can bounce back from fishing pressure faster than fin fish can. Markaida’s studies indicate that females are sexually mature at about one year, males at 10 months. "Females spawn multiple egg masses during reproductive life," Markaida says. Female squid taken by fishermen can hold millions of eggs.

But Gilly believes that the dynamics of the Sea of Cortez are not that simple. "Overfishing is a likely factor in a complicated equation, but I don’t think it explains everything," he says. "Humboldt squid aren’t 100-pound brutes their whole lives. They start out as quarter-inch larvae that are just about the best food for fish there could be. Adult squid may be competing with the fin fish, but they are providing food for whales, and there are a lot more sperm whales in the Sea of Cortez than ever before."

Gilly does not look at the squid’s presence as a negative. "Squid are like nomadic tribes. If the productivity were to change they would move on. Right now they are staying. And only an incredibly productive area could support such a level of top predator. We have to try and understand it the best we can."

In the annals of invertebrate life, few spineless creatures have attracted the human imagination as much as the giant squid. Though big, it is nowhere near the size shown above in an old woodcut. The giant squid may grow to 45, even 50, feet in length, but old records of giant squid exceeding 50 feet are probably erroneous, according to Smithsonian Institution squid expert Clyde Roper. A rival of the giant squid haunts Antarctic seas—the even bulkier colossal squid. Last year, a trawler captured one near the surface of the Ross Sea, giving scientists their only look at a pristine specimen since the first colossal was "discovered" in a sperm whale stomach in 1925. The body of the new specimen was more than 8 feet long. Giant squid grow to a body length of about 7 feet. However, the colossal’s tentacles are shorter than those of a giant squid, Roper says, giving it a maximum length of no more than 35 feet, so the giant is likely to hold its top rank in the realm of human awe.