The Lands Where Species Are Born 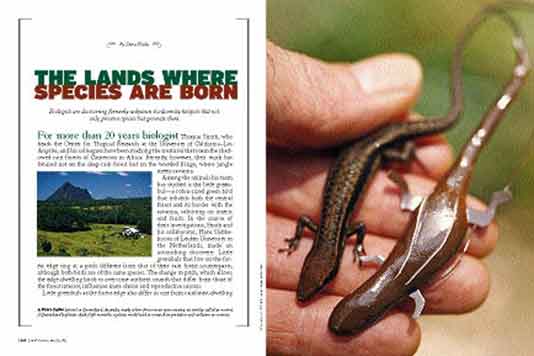 FOR MORE THAN 20 YEARS biologist Thomas Smith, who heads the Center for Tropical Research at the University of California–Los Angeles, and his colleagues have been studying the creatures that roam the shadowed rain forests of Cameroon in Africa. Recently, however, their work has focused not on the deep rain forest but on the wooded fringe, where jungle meets savanna. Among the animals his team has studied is the little greenbul—a robin-sized green bird that inhabits both the central forest and its border with the savanna, subsisting on insects and fruits. In the course of their investigations, Smith and his collaborator, Hans Slabbekoorn of Leiden University in the Netherlands, made an astonishing discovery: Little greenbuls that live on the forest edge sing at a pitch different from that of their rain forest counterparts, although both birds are of the same species. The change in pitch, which allows the edge-dwelling birds to overcome ambient sounds that differ from those of the forest interior, influences mate choice and reproductive success.

Little greenbuls at the forest edge also differ in size from rainforest-dwelling members of their species. They are heavier and have longer legs, longer wings and deeper bills—changes that confer competitive advantages. The longer wings, for instance, enable the birds to evade aerial predators in the more open environment. In some cases, the morphological differences are more pronounced than those seen among separate bird species living in the same habitat.

Smith believes he and his colleagues are witnessing the early stages of species generation, a process known as speciation. That view, if correct, would challenge the theory of speciation that has dominated science since the 1940s—namely, that new species arise through random genetic mutations when two populations of the same species are separated by physical barriers. The hypothesis raises some practical considerations as well, suggesting that conservationists may need to amend the criteria they use in choosing areas for protection.

According to the traditional theory of speciation, developed by Harvard University biologist Ernst Mayr, a geographic barrier such as a mountain range or a river could, for example, isolate two populations of a species, interrupting gene flow between them. Gradually, random mutations would cause the two populations to evolve to the point where they would be unable to mate and produce fertile offspring should they ever encounter one another again. This state of reproductive isolation is the fundamental definition of a species. 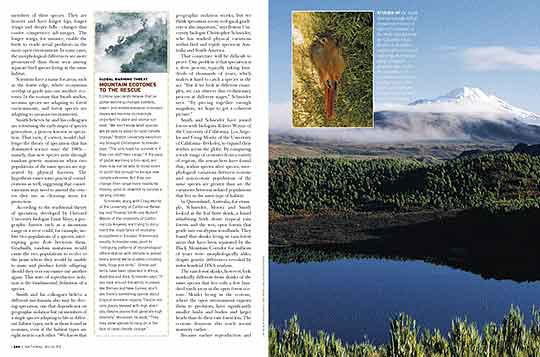 Smith and his colleagues believe a different mechanism also may be driving speciation, one that depends not on geographic isolation but on members of a single species adapting to life in different habitat types, such as those found in ecotones, even if the habitat types are right next to each other. “We know that geographic isolation works, but we think speciation across ecological gradients is also important,” says Boston University biologist Christopher Schneider, who has studied physical variations within bird and reptile species in Australia and South America.

That conjecture will be difficult to prove. One problem is that speciation is a slow process, typically taking hundreds of thousands of years, which makes it hard to catch a species in the act. “But if we look at different examples, we can observe this evolutionary process at different stages,” Schneider says. “By piecing together enough snapshots, we hope to get a coherent picture.”

Smith and Schneider have joined forces with biologists Robert Wayne of the University of California–Los Angeles and Craig Moritz of the University of California–Berkeley, to expand their studies across the globe. By comparing a wide range of creatures from a variety of regions, the researchers have found that, within species after species, morphological variations between ecotone and non-ecotone populations of the same species are greater than are the variations between isolated populations that live in the same type of habitat.

In Queensland, Australia, for example, Schneider, Moritz and Smith looked at the leaf-litter skink, a lizard inhabiting both dense tropical rain forests and the wet, open forests that grade into eucalyptus woodlands. They found that skinks living in rain forest areas that have been separated by the Black Mountain Corridor for millions of years were morphologically alike, despite genetic differences revealed by mitochondrial DNA analysis.

The rain forest skinks, however, look markedly different from skinks of the same species that live only a few hundred yards away in the open-forest ecotone. Skinks living in the ecotone, where the open environment exposes them to predators, have significantly smaller limbs and bodies and larger heads than do their rain forest kin. The ecotone denizens also reach sexual maturity earlier.

Because earlier reproduction and smaller size are often found in species subject to heavy predation, Schneider and his colleagues believe predation is prompting these evolutionary changes. This hypothesis is supported by the researchers’ discovery that the open forest is in fact home to more species of lizard-eating bird than is the rain forest, and their research suggests that lizards in the open forest are more likely to be attacked. If the predation-driven changes in size and shape also affect mate selection, then the ecotone lizards may have taken the first step down the road to speciation, Schneider says.

The biologists observed similar patterns along elevation gradients in South America’s Andes Mountains. Wedge-billed woodcreepers living in rain forests at about 2,600 feet above sea level have different-sized legs and bills compared to woodcreepers found some 600 feet higher. These variations are almost identical to the morphological differences Smith found when comparing little greenbuls in the Cameroon rain forest to those in the ecotone.

The researchers plan to use their results to reshape conservation strategies throughout the world. The traditional approach to protecting habitat focuses on preserving biologically diverse areas, especially those with species found nowhere else. For example, the Amazon Basin—a 2.5 million-square-mile region that includes portions of Brazil, Peru, Ecuador, Bolivia and Colombia—is home to more than a fifth of all known plant and animal species, making it one of the world’s top conservation priorities. Such lands clearly merit protection, but targeting only these areas has created a system of wildlife reserves that ignores vital transition zones. Bwindi National Park in Uganda, for example, is a montane forest park cut off from the lowland forest below. “It completely misses the elevation gradient,” Smith says.

Ecotone researchers argue for a broader approach. “It’s natural to want to preserve something pristine, but we need to break out of that kind of thinking,” Wayne says. Saving populations in a “pure” habitat, he argues, “is analogous to building an investment portfolio with a single stock.” Ecological gradients, on the other hand, encourage adaptation and experimentation, increasing variation within a single species. “If you can preserve a system like that, you’re preserving adaptive diversity,” Wayne says. “It’s like a mutual fund: To minimize risk, you need a diverse portfolio.”

This new strategy is needed urgently, Smith adds, because ecotones, which tend to be more accessible to humans and more desirable places to live than rain forests, are being destroyed even faster. “Now we’re seeing a sharp border rather than a large transition zone, as people build to the edge of the rain forest,” Smith says. “That doesn’t allow for the kind of adaptive processes we’ve observed.”

Conservation groups are responding with a shift to ecotone protection. The Canadian conservation group BirdLife International, for instance, is working to protect Tchabal Mbabo, a 74,000-acre forest in western Cameroon that abuts a far bigger national park, Gashaka Gumti, in Nigeria. Smith and his colleagues conducted the first bird and mammal surveys of the area in the 1990s, focusing on ecotone species. “The presence of a complete ecological gradient, extending from the lowland savanna to montane forest and grasslands, is almost unique in Africa and was fundamental in our decision to work in this area,” BirdLife program manager Jonathan Barnard says.

Conservation International (CI), a major player in biodiversity preservation, also has begun to reexamine its agenda. “Tom Smith and his colleagues put ecotones on the map, showing them to be mini-incubators of species,” CI senior vice president Claude Gascon says. “When contemplating a reserve today, we look at the edges as well as the pristine inner region.” In fact, CI is developing a management plan for a 28.4-million-acre indigenous territory in Brazil, home to the Kayapo Indians, that encompasses the ecotone where the world’s largest protected tropical forest meets the cerrado, or grassland.

The new findings also caught the attention of the World Bank, which helped finance the construction of an oil pipeline between Chad and Cameroon under the condition that two national parks be created to offset the loss of woodlands. In 2000, that agreement culminated in the establishment of the million-acre Mbam Djerem National Park in Cameroon in the same areas where Smith began his ecotone research 15 years ago. “It’s the only park I know of in Central Africa that contains the entire rainforest-savanna gradient,” Smith says. “It shows that ecotones are no longer strictly an academic concern.”

Steve Nadis is a writer based in Cambridge, Massachusetts. His last article for National Wildlife, “Taking the Plunge in a Once-Filthy River,” appeared in the June/July 2003 issue.

Ecotone specialists believe that as global warming changes habitats, lower- and middle-elevation mountain slopes will become increasingly important to plant and animal survival. “We don’t know what species will be able to adapt to rapid climate change,” Boston University evolutionary biologist Christopher Schneider says. “The only hope for survival is if they can shift their range.” If the pace of global warming is too rapid, animals may not be able to move north or south fast enough to escape new climate extremes. But they can change their range more readily by moving uphill or downhill to survive a varying climate.

Schneider, along with Craig Moritz of the University of California–Berkeley, and Thomas Smith and Robert Wayne of the University of California–Los Angeles, are trying to document the importance of montane ecosystems in Ecuador. Preliminary results, Schneider says, point to “intriguing patterns of morphological differentiation with altitude in almost every animal we’ve studied, including bats, frogs and birds.” Similar patterns have been observed in Africa, Australia and Asia, Schneider says. “If you look around the world, in places like Borneo and New Guinea, you’ll see there’s something special about tropical montane regions. They’re not only places blessed with high diversity, they’re places that generate high diversity.” Moreover, he adds, “They may allow species to hang on in the face of rapid climate change.”