By letting leaves accumulate in a portion of your yard, you can help build healthy soil and provide habitat for a wide variety of animals 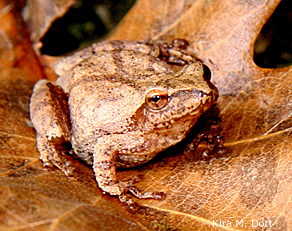 TUCKED BEHIND a brownstone on 95th Street in Manhattan is a garden the size of a living room. There are potted plants, shrubs, a gravel path and a little birdbath, all shaded by the neighbors’ maple and weeping willow. In summer, there were wildflowers, but now, in autumn, just dried plants remain. Tree leaves have fallen and are left largely untouched by the garden’s owner.

Elizabeth Johnson, a program manager with the American Museum of Natural History’s Center for Biodiversity and Conservation in New York, has come here because, well, Central Park is a little too obvious a place to search for a thriving natural ecosystem in the heart of the city. She wants to show that fierce predators, abundant grazers and diligent decomposers can exist just about anywhere, as long as a layer of leaves and other plant debris—together, called leaf litter—has been allowed to blanket the soil.

“The leaf litter layer is full of life,” says Johnson, as she begins sifting through the organic material. “It provides both food and shelter to an amazing community of creatures.”

She finds earthworms, no surprise there, but also millipedes and pillbugs—the latter of which curl into balls at her probing. These invertebrates, among others, feed on the litter, breaking it up into smaller pieces. This makes it easier, says Johnson, for organisms such as bacteria and fungi to convert the bits into nutrients, which are absorbed by nearby plants.

“One of the first rules of organic gardening is ‘build healthy soil,’ and leaf litter animals help homeowners do that,” says David Mizejewski, author of Attracting Birds, Butterflies and Other Backyard Wildlife. They also help support biodiversity by becoming food themselves.

Consider the springtail, says Johnson. She is sure that if she spread out a handful of soil from this urban backyard she would find plenty of these tiny insects, which along with mites are the most abundant invertebrates in leaf litter. Some springtails eat fallen leaves, while others eat the fungi that grow on fallen leaves. In turn, springtails are eaten by just about every predator that lives in the detritus, including spiders, beetles and centipedes.

“Every resident of the leaf litter—or visitor to it—is connected to the food web in some way,” says Johnson. “Salamanders, turtles, and mice feed on earthworms and insects, and they, in turn, are eaten by birds or larger mammals.” A backyard with a healthy leaf litter habitat may attract bluebirds, which eat large quantities of insects and can be difficult to coax to a bird feeder. Just a few steps up the food chain from bluebirds are raccoons, snakes and hawks.

Leaf litter also provides a home for the natural enemies of aphids and many other garden pests. Ladybugs, tiger beetles and toads living in backyard leaf litter, for example, have only a short commute to consume pests in your yard. Whether you live in the city, the suburbs or the country, says Johnson, creatures similar to the ones she found in Manhattan will find a home if you let a layer of plant material accumulate in some part of your yard. The components of leaf litter will vary by habitat, as will the composition of species, but the benefits will be largely the same.

“Leaf litter retains moisture, meaning you use less water in your garden,” says Mizejewski. It also helps insulate plants from winter’s cold. And it provides habitat for some varieties of spiders, bees and moths that overwinter in the litter layer, sheltered from the harsh elements.

While letting leaves stay where they fall is an easy way to have litter in your yard, Mizejewski says that you don’t have to forsake a tidy garden appearance to support wildlife. “Even a small patch in a back corner of your property will work,” he says. “Every little bit counts.”

Madeline Bodin is a Vermont-based freelance writer. To learn more about gardening for wildlife, visit the Certified Wildlife Habitat  section.

Dry leaves and brush can be a fire hazard in regions plagued by drought. Experts recommend people who live in high-risk areas protect their property by not letting leaf litter accumulate within at least 30 feet of their homes.

How to Build an Amphibian House

Most amphibians have sensitive skin and need to find moist, dark cover from the sun, says David Mizejewski, author of Attracting Birds, Butterflies and Other Backyard Wildlife. He recommends creating a shelter for frogs, toads and salamanders, as well as other leaf litter critters, by following these steps:

Dig a shallow depression in the soil, about two inches deep.
Cover the depression with a piece of untreated plywood, with one end raised by a few rocks and the other end touching the ground.
Conceal the plywood by placing several inches of leaves or brush on top of it, leaving only the crevice opening exposed.
“It’s a great spot,” says Mizejewski, “for animals to hang out.”

"Growing a Greener World in the Garden"
"Before You Clean Up Plant Debris, Consider the Benefits of a Messy Yard"
"Gardener's Guide to Global Warming"
"Autumn Beauties for the Garden"
Garden for Wildlife: NWF's Certified Wildlife Habitat Program
Wildlife Gardening Archives