From holes in the ground to scat, skulls—even dead bugs—there are field guides to identify nearly any natural object you might come across these days 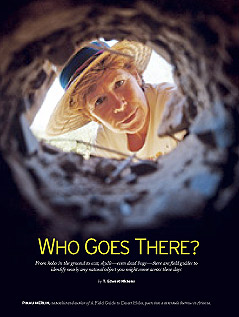 One afternoon, as a blistering winter sun baked the desert sands of northern Mexico’s Sierra del Pinacate Biosphere Reserve, Pinau Merlin stared intently at her feet. Wristwatch in hand, a companion said, "Go," and the naturalist-author went to work. Within five minutes Merlin had located holes dug by palo verde bees, kangaroo rats, kit foxes and mice. She found burrows of wolf spiders and exploration holes most likely scratched out by ground squirrels. All told, in precisely 300 seconds Merlin found exactly 134 holes in the desert floor, a tally that made her frown. "That’s a disappointing sum," she said. "Not a tarantula hole anywhere."

Yet if there had been one, Merlin would be the person to find it. In 1999, she completed a book published by the Arizona-Sonora Desert Museum Press called A Field Guide to Desert Holes. It is most likely the planet’s only field guide to holes in the ground in any environment. A year after its release, Desert Holes was one of the top four selling books in Arizona on Amazon.com. A book signing at the Tucson Barnes & Noble soon after it was published attracted a standing-room-only crowd. "They told me it was one of the largest crowds they’d ever had for a writer," Merlin says, grinning like a ring-tailed cat. The guide is now in its fourth printing.

And it’s not alone. From Roger Tory Peterson’s seminal series on bird identification—the first book was published in 1934—the field guide phenomenon has gone, literally, wild. Merlin’s thoroughly researched treatise on holes is only one of the more curious published in recent years. From mammal tracks and scat to frog calls, bones and bird’s nests, there are field guides on every imaginable natural history topic—and a few tongue-in-cheek volumes that spoof the widely expanding genre.

As interesting as the guides are themselves, the tales told by their authors are also fascinating. For Desert Holes, Merlin spent months trying to figure out exactly which fly, bee, beetle or rodent made which holes, and how the animal uses subterranean habitat to live in the desert’s brutal environment. "There was very little information available," she recalls. "To most researchers, dens and burrows and holes in the ground are an interesting aside, if they think about them at all. The focus is usually on the animal." 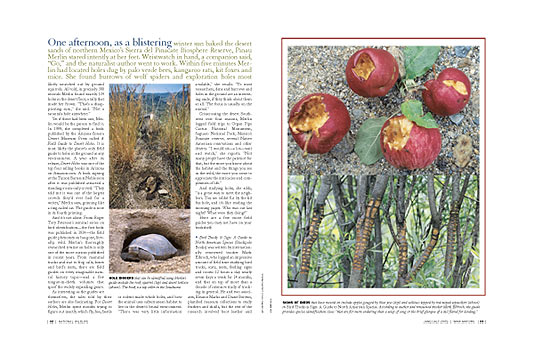 Crisscrossing the desert Southwest over four seasons, Merlin logged field trips to Organ Pipe Cactus National Monument, Saguaro National Park, Mexico’s Pinacate reserve, several Native American reservations and other deserts. "I would sit—a lot—wait and watch," she reports. "Not many people have the patience for that, but the more you know about the habitat and the things you see in the wild, the more you come to appreciate the intricacies and complexities of life."

And studying holes, she adds, "is a great way to meet the neighbors. You see rabbit fur by the kit fox hole, and it’s like reading the morning paper. Who was out last night? What were they doing?"

Here are a few more field guides you may not have on your bookshelf:

Bird Tracks & Sign: A Guide to North American Species (Stackpole Books) was written by internationally renowned tracker Mark Elbroch, who logged an impressive amount of field time studying bird tracks, scats, nests, feeding signs and roosts: 12 hours a day nearly seven days a week for 14 months, and that on top of more than a decade of intensive study of tracking in general. He and two associates, Eleanor Marks and Diane Boretos, plumbed museum collections to study feathers and skulls, but the rest of the research involved boot leather and inexhaustible patience. To analyze and draw the tracks of birds that rarely put a foot on the ground—white-breasted nut-hatches, for example—Elbroch collected native clay from the particular area of observation, ground the clay, rewet it, spread it out near bait, then settled back for endless hours of watching. Over and over again. "I followed countless birds. If it’s in that book," he says, "I observed it in the wild."

A Key-Guide to Mammal Skulls and Lower Jaws (Mad River Press) is a slim, spiral-bound guide that was first published in 1986, but its simplicity and ease of carrying have worn well. The book’s author, Aryan Roest, is a noted Pacific Coast sea otter and Sierra Nevada red fox authority who taught biology for 40 years at California Polytechnic State University. His guide is subtitled "A nontechnical introduction for beginners," and that’s a perfect description. There’s no front-of-the-book fluff or unnecessary background, just step-by-step instructions on how to tell if the cranium in your hand comes from an armadillo, pocket squirrel, polar bear, round-tailed muskrat, or one of the 102 other species keyed out in the book. (Are the zygomatic arches distinctly widest apart toward the rear? Must be a beaver.)

The Scats and Tracks series (Rocky Mountains, Pacific Coast States, Desert Southwest, and Southeast; The Globe Pequot Press) offers a guide to a topic that many scientists swoon over. DNA analysis of scat has helped researchers find lynx populations in Minnesota’s national forests, monitor birth and death rates of wolves in the wild, and analyze the prey items in the stomachs of Stellar sea lions. No surprise, then, that deeply curious nonscientists might find the leavings, splats, splashes and feces of wild animals equally absorbing. The series applies a traditional field guide methodology—detailed drawings, measurements and descriptions—to the scats of creatures as small as the eastern newt and as large as the grizzly bear.

Flattened Fauna: A Field Guide to Common Animals of Roads, Streets, and Highways (Ten Speed Press) is a guide to "animals that, like the Wicked Witch of the East in The Wizard of Oz, are not just merely dead but really most sincerely dead," writes author Roger Knutson in this book’s introduction. There’s no question that Knutson, a retired professor of ecology at Luther College in Decorah, Iowa, has fun with his subject. A drawing of a dead roadrunner, for instance, illustrates "something of the serenity achieved by a few road animals. The frantic pace of constant food-seeking has slowed considerably here. Regardless of traffic speed, the bird is clearly at rest." But he also includes a wealth of information on creatures whose remains on highways may, sadly, be the only exposure to the animals that most people will ever have. 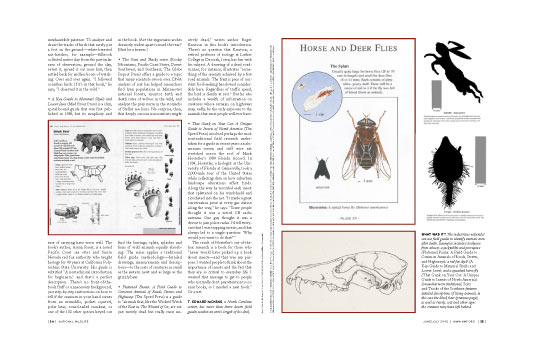 That Gunk on Your Car: A Unique Guide to Insects of North America (Ten Speed Press) involved perhaps the most nontraditional field research undertaken for a guide in recent years: an aluminum screen and stiff wire net stretched across the roof of Mark Hostetler’s 1984 Honda Accord. In 1994, Hostetler, a biologist at the University of Florida at Gainesville, took a 2,000-mile tour of the United States while collecting data on how suburban landscape alterations affect birds. Along the way he recorded each insect that splattered on his windshield and ricocheted into the net. "It made a great conversation piece at every gas station along the way," he says. "Some people thought it was a weird CB radio antenna. One guy thought it was a device to jam police radar. I’d tell everyone that I was trapping insects, and that always led to a single question: ‘Why would you want to do that?’"

The result of Hostetler’s out-of-the-box research is a book for those who "never would have picked up a book about insects—and that was my purpose. I wanted people to think about the importance of insects and the fact that they are so critical to everyday life. I wanted that message to get to people who normally don’t pay attention to science books, so I needed a neat hook." Or a net.

T. Edward Nickens, a North Carolina writer, has more than three dozen field guides within an arm’s length of his desk.