Who You Callin' Shrimp?

With the eyes of an eagle and the punch of a heavyweight champ, the tropical mantis shrimp is the toughest hombre on the coral reef 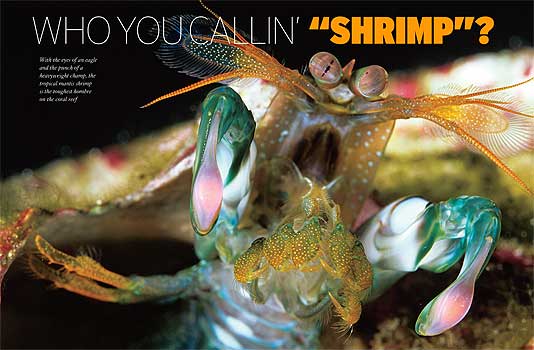 IF A CORAL REEF were the Wild West, the top gunslinger would be shrimpy, bellicose and bug-eyed. He would have the sharpest vision in nature and would be one of the quickest draws in the animal kingdom. He would be a mantis shrimp.

Mantis shrimp are munchkin tyrannosaurs, extremely aggressive predators that use specially adapted claws to spear and smash small fish, snails, crabs--and occasionally one another. Although they bear a superficial resemblance to shrimp, mantis shrimp veered from the crustacean mainstream about 400 million years ago, before vertebrates crawled out of the ocean. Scientists refer to them as stomatopods.

Common in tropical and subtropical seas, stomatopods number more than 600 species, ranging in size from a half inch to 16 inches. They are well known to aquarium hobbyists, who have the same affection for them that chicken farmers have for foxes. Rocks taken from reefs sometimes have a stomatopod lurking inside a cavity. The result? A $200 Picasso triggerfish becomes crustacean chow. At the Monterey Bay Aquarium, professional aquarist David Cripe spent nearly a year trying to nab a 3-inch mantis shrimp that was terrorizing a large coral reef exhibit. "Sparky" was eventually put on public display--in a separate tank.

A truly pugnacious stomatopod can threaten not only aquarium fish but also the aquarium itself. In 1998, a 4-inch mantis shrimp at the Sea Life Centre in Norfolk, England, shattered the quarter-inch-thick glass of its aquarium. The power puncher was promptly christened "Tyson."

Lock and Load
"Everything about these animals is related to the weapons system," says Roy Caldwell of the University of California–Berkeley. "Every single aspect of their biology varies depending on the type of weapon they have."

A stomatopod's raptorial append-ages fold up like a jackknife. They vaguely resemble the folded front legs of the praying mantis, hence the name "mantis shrimp." Some species are spearers, with sharp spikes that resemble a slanted pitchfork. Others, like Sparky and Tyson, are smashers. These species strike with hard, knobby elbows. They also can stab with a short, sharp spike. The strike of a mantis shrimp is 50 times faster than the blink of a human eye.

Spearers impale fish for a living, while smashers pummel crabs and mollusks. Caldwell holds up a thick shell with a gaping hole. "It is an incredibly powerful weapon. You or I would need a hammer to beat this shell up, but this hole was made by a 6-inch stomatopod."

Humans who get their soft body parts near mantis shrimp often regret it. "We had a massive sampling program in Panama," recalls Caldwell. "Each stomatopod was examined under a microscope. A lot of students manned the project, and if you thumb through the logbook you can tell when a new person showed up by the bloodstains." Caldwell once received a letter from a South African diver who grabbed a large smasher and lost a finger to it.

If stomatopods can mangle a human, imagine what they can do to each other. Some species compete for scarce homes in rocky cavities. Spearers have a weapon system that is dangerous but not deadly to other stomatopods. Smashers, however, can hit with terminal velocity. "I have literally seen a smasher knock the head off another stomatopod," Caldwell says. "It is a lethal offensive weapon."

With that kind of power, you would not want to strike blindly. As it turns out, the eye of a mantis shrimp is even more remarkable than its strike.

Eagle-Eyed? Try Shrimp-Eyed
Watching a fish through aquarium glass, I sometimes get the feeling it is vaguely aware of me. Watching a mantis shrimp through aquarium glass, I have no doubt I'm being checked out. In Caldwell's Berkeley laboratory, a small stomatopod scampers up to the side of its tank. It waves its little eyestalks to and fro, each tiny round eyeball moving independently. When I move a finger too close, there is a sharp crack as it punches the glass.

"Mantis shrimp have the world's most complex color vision system," according to Justin Marshall of the University of Queensland. "These lowly crustaceans possess four times as many color receptors as humans, four of which sample the ultraviolet, a region of the spectrum to which we are blind." Stomatopods also can see polarized light. Marshall believes that for a mantis shrimp, polarized vision may be as rich a sensory experience as color vision.

Scientists are still not sure how stomatopods use polarized vision. A clear sky has a very orderly pattern of polarized light, and many animals, including some crustaceans, use this pattern for navigation. Polarized light also increases contrast. Polarized light may help stomatopods spot transparent prey, as well as shiny-scaled predators such as jacks and barracuda. In addition, some mantis shrimp species carry polarized patches on their bodies--perhaps a secret display accessible only to their own kind. Recently, Caldwell discovered some stomatopods also bear fluorescent patches visible only to others of their kind.

Stomatopods also excel in range finding, probably because an effective strike demands the ability to judge distance with supreme accuracy. While humans have binocular vision, a mantis shrimp has three overlapping fields of vision in each eye, giving it hexocular vision between its two eyes.

"Why all the complexity in the eye?" asks Caldwell. "The quick answer is so they don't get beat over the head by an opponent." Some species compete for scarce rock cavities and must be able to "read" the display repertoires of adversaries to avoid being smashed to bits.

Indeed, among these aggressive creatures, even mating can be tricky. A female may test a male by making him fight his way in. Once the eggs are laid the male must leave. Out in the open he risks capture by a predator. "This has a tremendous cost for males," Caldwell says. "At the age of first reproduction, the sex ratio is 50-50, but after a few years there are five or six females of that age for every male."

The males of some species prefer that females come to them, so if they give up their homes they at least are assured of reproducing. Some females saunter in, whether prepared to breed or not, and then try to evict the male. "It's a fairly interesting tactic," Caldwell says wryly. "But males aren't as dumb as we originally thought. Breeding tends to occur on a lunar cycle, and males will only let females in during the full moon, when they are most likely to breed."

Some species of mantis shrimp are monogamous. Caldwell has been following one pair of Lysiosquillina maculate in Hawaiian waters since 1985.

The Rolling Stomatopods
As if mantis shrimp didn't have enough tricks up their thorax, one species has invented the wheel. Or, more accurately, is a wheel. Nannosquilla decemspinosa lives in shallow sandy areas along the Pacific coast of Central and South America. At low tide the inch-long stomatopod is sometimes left high and dry. It possesses a very flexible body, adapted to making tight U-turns in its narrow sand burrow, but its short, weak legs cannot propel it across the sand. The solution? N. decemspinosa lies on its back, curls its tail up to its head, executes a neat flip and starts over again. Caldwell found one particularly energetic stomatopod that somersaulted for more than 6 feet. Although one species of spider is known to fold into a ball and roll down sand dunes, N. decemspinosa is the only animal known to wheel itself over level ground, or even uphill.

Next time you are snorkeling over a coral reef, you may discover yourself being minutely observed by a mantis shrimp lurking in a rock cavity or sand burrow. Take time to appreciate the remarkable package evolution wrapped up in stomatopods: the busy, all-seeing eyeballs, the deadly club or spear poised to strike, the strategies necessary to survive among other tiny Terminators. Just resist any urge to pet it.

Pamela S. Turner is an award-winning children's book author. Learn more about her at www.pamelasturner.com.