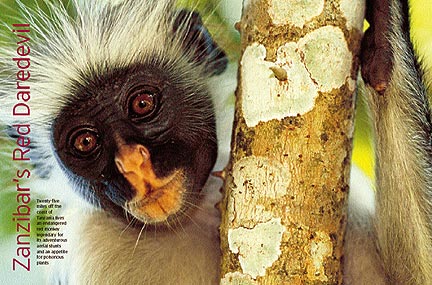 THIS IS EVEL KNIEVEL’S kind of monkey. Decked out in a crimson cape, contrasted by a crown of white, wispy fur and an ebony face mask, the Zanzibar red colobus monkey leaps, arms and legs extended, nearly 25 feet through the air and lands feet first on a branch. Among local people, the primate’s Kiswahili nickname is kima punju—poison monkey. According to superstitions, trees where the monkey eats die after a visit, dogs that tangle with the primate lose their fur. Local residents, deterred by such beliefs and the animal’s trademark scent of sulfur, won’t eat it.

Not only is Zanzibar’s red colobus feared, acrobatic and handsome, it is also resourceful. Researchers from the United States reported in the International Journal of Primatology in 1997 that the primate had curiously developed a habit of collecting scraps of charcoal to gnaw on from burned tree stumps, kilns and hearths. The scientists surmised that the odd behavior was apparently helping the monkeys digest toxic substances in their diets. In fact, the charcoal allowed the monkeys to expand their menus to include things they hadn’t eaten before, such as Indian almond and mango, which contains compounds that, in large quantities, interfere with digestion. As a result, Zanzibar’s dwindling red colobus population mushroomed.

Despite promising population gains, however, conservationists fear this acrobat will have a tenuous future if agriculture, timber and other development interests continue to chip away at its remote, island habitat. The entire population of 2,000 red colobus monkeys is packed into Zanzibar’s Jozani Forest Reserve, the last intact indigenous woodland on the 640-square-mile archipelago. And the monkeys may well be crowded out if the island’s human numbers double in the next 20 years, as predicted. 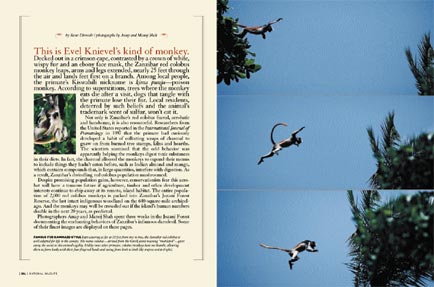 FAMOUS FOR KAMIKAZE-STYLE LEAPS covering as far as 25 feet from tree to tree, the Zanzibar red colobus is well adapted for life in the canopy. The name colobus—derived from the Greek word meaning "mutilated"—gives away the secret to this animal’s agility. Unlike most other primates, colobus monkeys have no thumbs, allowing them to form hooks with their four-fingered hands and swing from limb to limb like trapeze artists. 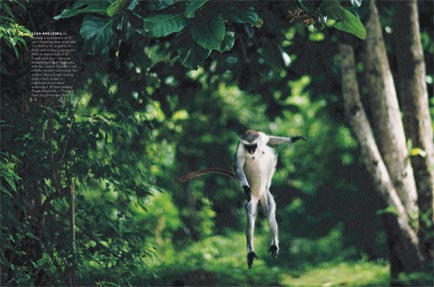 LEAN AND LEGGY, the primate is equipped with its own balancing pole, a tail that is a third of the length of its body, and strong, grasping feet that encompass half of the length of its legs. American primatologist Tom Struhsaker, who has studied Zanzibar's red colobus monkey extensively, has written that a female leaping with a baby in tow is equivalent to a human achieving a 50-foot standing broad jump with a 25-pound load strapped to her chest. 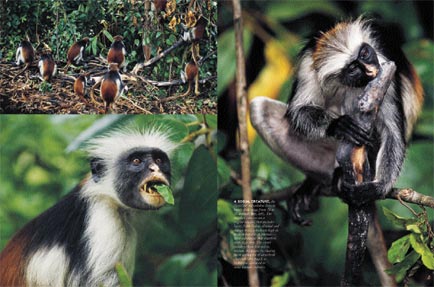 A SOCIAL CREATURE, the Zanzibar red colobus lives in troops that range from 20 to 70 animals (top, left). The monkey survives on a vegetarian diet that includes leaves from Indian almond and mango trees (bottom, left), which are high in protein but also in phenols—toxic substances that interfere with digestion. The clever monkeys have learned to tolerate the toxins by chasing them with a bit of absorbent charcoal (right), a technique also used in some human cultures.