The ostrich can stand more than 9 feet tall, weigh 350 pounds and run faster than anything else on two legs; but in the end, this living feather duster is all avian 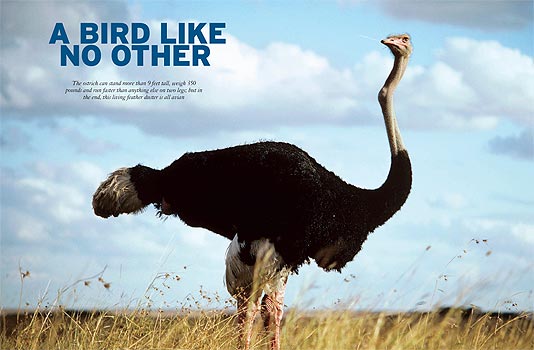 THE OSTRICH, the world’s largest living bird, is also the fastest runner on two legs. In short bursts, a lion or a cheetah can overtake it. But an ostrich can motor for 10 miles straight at a steady 30 miles an hour—faster than Lance Armstrong in a time trial. Research biologist Jonas Rubenson of Northeastern University is one of several scientists eager to find out how they make it look so easy.

“If you were able to run like an ostrich, you’d be running on your toes with all your joints bent,” Rubenson says. Even at top speed, the giant bird manages to keep its head absolutely level. “If you saw film of an ostrich that didn’t show its feet, you wouldn’t know if it was running or walking,” he says. The bird’s level gait reminds some people of Groucho Marx’s bent-kneed race-walking style. “In fact, ‘Groucho running’ is a term that’s thrown around quite a bit in the biomechanics literature,” he says.

The ostrich is one of the true oddities of the animal kingdom: a flightless bird that runs faster than many birds can fly; eyes the size of billiard balls that glare down disdainfully from a height of 8 or 9 feet; a long beak with a pronounced overbite and nostrils set toward the tip, not the base as in other birds; fluffy, barbless feathers on small, feeble wings; massive bare thighs and thin, knobby-jointed legs ending in hooflike feet. Strange-looking it may be, but the ostrich is superbly adapted to the arid plains of east and southern Africa where it lives. By studying it, and especially the choreography of its bones, tendons and muscles at work, scientists hope to gain new insight into the mystery of bipedal locomotion in general.

The ostrich is a member of the oldest group of living birds, the ratites. These today are largely flightless birds found across the Southern Hemisphere, including the rhea of South America; the cassowary of New Guinea; Australia’s national bird, the emu; and New Zealand’s goose-sized kiwi. The awesome moa, which stood 12 feet tall, went extinct in New Zealand only 200 years ago, leaving the ostrich as the group’s Big Bird. A male ostrich can reach 9-1/2 feet and weigh as much as 350 pounds.

Ancestors of the ostrich once raced across much of Asia, Africa and eastern Europe, even Switzerland. In ancient times, the ostrich was known as the camel bird (hence its scientific name, Struthio camelus) and was hunted for its plumes by King Tut, among others. Hunting and habitat loss shrunk its range drastically. Were it not for the rapid growth of ostrich farming in the 19th century, the species might well have gone extinct by the turn of the 20th, when the vogue for ostrich plumes in ladies’ hats was at its peak. 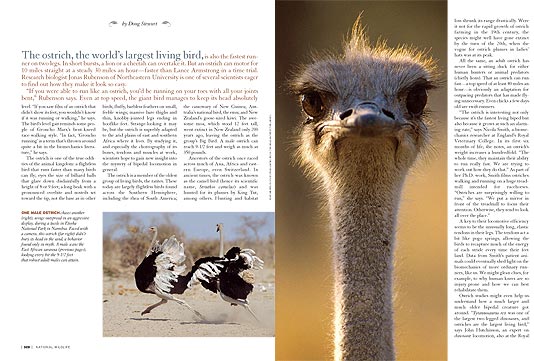 All the same, an adult ostrich has never been a sitting duck for either human hunters or animal predators (chiefly lions). That an ostrich can run fast—a top speed of at least 40 miles an hour—is obviously an adaptation for outpacing predators that has made flying unnecessary. Even chicks a few days old are swift runners.

“The ostrich is interesting not only because it’s the fastest living biped but also because it grows at such an alarming rate,” says Nicola Smith, a biomechanics researcher at England’s Royal Veterinary College. In its first six months of life, she notes, an ostrich’s weight increases a hundredfold. “The whole time, they maintain their ability to run really fast. We are trying to work out how they do that.” As part of her Ph.D. work, Smith films ostriches walking and running on a huge treadmill intended for racehorses. “Ostriches are surprisingly willing to run,” she says. “We put a mirror in front of the treadmill to focus their attention. Otherwise, they tend to look all over the place.”

A key to their locomotive efficiency seems to be the unusually long, elastic tendons in their legs. The tendons act a bit like pogo springs, allowing the birds to recapture much of the energy of each stride every time their feet land. Data from Smith’s patient animals could eventually shed light on the biomechanics of more ordinary runners, like us. We might glean clues, for example, to why human knees are so injury-prone and how we can best rehabilitate them.

Ostrich studies might even help us understand how a much larger and much older bipedal creature got around. “Tyrannosaurus rex was one of the largest two-legged dinosaurs, and ostriches are the largest living bird,” says John Hutchinson, an expert on dinosaur locomotion, also at the Royal Veterinary College. “Understanding how a big bird works can give us some ideas about how T. rex moved compared to smaller bipedal dinosaurs, like velociraptors.” (Not that Tyrannosaurus could run like an ostrich, Hutchinson hastens to add. Based on his studies of T. rex musculature, he says, “I’m not convinced it could run at all.”) 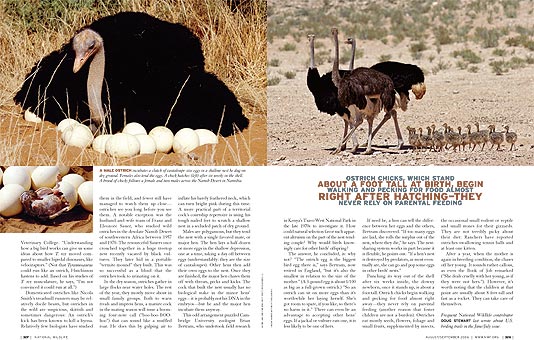 Domesticated ostriches like Nicola Smith’s treadmill runners may be relatively docile beasts, but ostriches in the wild are suspicious, skittish and sometimes dangerous: An ostrich’s kick has been known to kill a hyena. Relatively few biologists have studied them in the field, and fewer still have managed to watch them up close—ostriches see you long before you see them. A notable exception was the husband-and-wife team of Franz and Eleonore Sauer, who studied wild ostriches in the desolate Namib Desert of southwestern Africa between 1957 and 1970. The resourceful Sauers once crouched together in a huge treetop nest recently vacated by black vultures. They later hid in a portable “termite mound” they built. This was so successful as a blind that the ostriches took to urinating on it.

In the dry season, ostriches gather in large flocks near water holes. The rest of the year, they mostly move about in small family groups. Both to warn rivals and impress hens, a mature cock in the mating season will issue a booming four-note call (“boo-boo-BOO-hoo”) that can sound like a muffled roar. He does this by gulping air to inflate his barely feathered neck, which can turn bright pink during this time. A more practical part of a territorial cock’s courtship repertoire is using his tough-nailed feet to scratch a shallow nest in a secluded patch of dry ground.

Males are polygamous, but they tend the nest with a single favored mate, or major hen. The hen lays a half-dozen or more eggs in the shallow depression, one at a time, taking a day off between eggs (understandably: they are the size of cantaloupes). Other hens then add their own eggs to the nest. Once they are finished, the major hen chases them off with threats, pecks and kicks. The cock that built the nest usually has no biological stake in the minor hens’ eggs—it is probably not his DNA in the embryos—but he and the major hen incubate them anyway.

This odd arrangement puzzled Cambridge University zoologist Brian Bertram, who undertook field research in Kenya’s Tsavo West National Park in the late 1970s to investigate it. How could natural selection favor such apparent altruism on the part of the nest-tending couple? Why would birds knowingly care for other birds’ offspring?

The answer, he concluded, is: why not? “The ostrich egg is the biggest bird egg there is,” says Bertram, now retired in England, “but it’s also the smallest in relation to the size of the mother.” (A 3-pound egg is about 1/100 as big as a full-grown ostrich.) “So an ostrich can sit on more eggs than it’s worthwhile her laying herself. She’s got room to spare, if you like, so there’s no harm in it.” There can even be an advantage to accepting other hens’ eggs. If a jackal or vulture eats one, it is less likely to be one of hers.

If need be, a hen can tell the difference between her eggs and the others, Bertram discovered. “If too many eggs are laid, she rolls the surplus out of the nest, where they die,” he says. The nest-sharing system works in part because it is flexible, he points out. “If a hen’s nest is destroyed by predators, as most eventually are, she can go and pop some eggs in other birds’ nests.”

Punching its way out of the shell after six weeks inside, the downy newborn, once it stands up, is about a foot tall. Ostrich chicks begin walking and pecking for food almost right away—they never rely on parental feeding (another reason that foster children are not a burden). Ostriches eat mostly seeds, flowers, foliage and small fruits, supplemented by insects, the occasional small rodent or reptile and small stones for their gizzards. They are not terribly picky about their diet: Ranchers have reported ostriches swallowing tennis balls and at least one kitten.

After a year, when the mother is again in breeding condition, she chases off her young. It sounds rather callous, as even the Book of Job remarked (“She deals cruelly with her young, as if they were not hers.”). However, it’s worth noting that the children at that point are usually about 8 feet tall and fast as a rocket. They can take care of themselves.