Wild Encounters - A Vulture with Style

The bearded vulture is the only known bird species that deliberately dyes its plumage; biologists say the resulting orange-red feathers may be a symbol of status 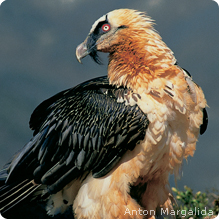 THEY EAT THE DEAD. That’s probably reason enough for their bad reputation. But with hunched backs, beady eyes and bald, snakelike heads, vultures are not exactly models of elegance, either. There is an exception, however: the bearded vulture, which ranges from southern Europe and the east coast of Africa through the Middle East to the Himalayas. The bird may, in fact, be the world’s most stylish animal with wings. According to biologist Antoni Margalida of Spain’s Bearded Vulture Study and Protection Group, “It is the only bird that utilizes cosmetics to dye its plumage.”

Beginning at about age 7, the vulture equivalent of adolescence, the birds begin frequenting red, iron-rich mud pits to dye their naturally white breast, neck, and head feathers. “The movements in the red soils are elaborate, different than when they bathe in clear water,” says Margalida, who has been studying bearded vultures in the Spanish Pyrenees for 16 years. The birds first dip their undersides, he explains, then use their beaks and talons to spread the tint from foot to neck. Then they rub their heads against their stained shoulders. The result is a snappy suit of sunset orange.

Bearded vultures are not the only animals that use dirt. A host of creatures, from house sparrows to horses and African elephants, employ dust or mud to cool off and to battle parasites. Male wild boars, previously thought to wallow for the same reasons, appear to get dirty to attract mates. In a recent study of several hundred wild boars, only adult males wore a coat of mud, and 90 percent of their wallowing took place in autumn when temperatures were cool, pests were few—and females were in estrus. In this country, male rock ptarmigans, after they’ve found mates, camouflage their snow white plumes in earth tones to elude predators. In all of these cases, though, the look comes from a covering rather than a coloring, and it does not last very long—more like face powder than a semipermanent hair highlight.

Why would a big, burly, black-and-white vulture gussy itself up in blush? It may boil down to a combination of diet and a society based on status. “Their diet is primarily ungulate bones,” says Margalida. They search cliff sides and valleys for sheep or chamois skeletons cleared of meat by other scavengers. While nutritious, the bones lack carotenoids, substances common in seeds and berries that give most other birds their flashy feathers.

“Red is very popular in the bird world,” says Margalida, adding that, in bearded vultures, the color appears to be a status symbol. Females, the dominant sex, are brighter than males. Color intensity also grows with age. A bird often handles conflict by puffing out and displaying its dyed ’do.

Showing off one’s shade of red may advertise quality, Margalida says. “The damp, iron-rich soils are rare and require a detailed knowledge of the territory.” It’s as if the bird’s saying: I’m the brightest, baddest, most knowledgeable bearded vulture south of the Pyrenees.

Beyond being the only bird that uses cosmetics to dye its plumage, the bearded vulture (Gypaetus barbatui) stands out in another—less fortunate—way: It is one of rarest raptors in Europe.

Inhabiting high-mountain habitats usually above tree line, about 100 breeding pairs of bearded vultures remain in Europe today, primarily in the Pyrenees between France and Spain, on the islands of Corsica and Crete, and in mainland Greece.

The scavengers feed almost exclusively on the skeletons of dead sheep, chamois, and other medium-sized animals—bones make up between 70 and 90 percent of their diet—and this dependence is one of the main reasons the species is endangered. In some parts of its range, mainland Greece, for example, a decrease in livestock rearing has resulted in less food for the birds. In other regions, the vultures are poisoned by baited carcasses intended to kill “vermin” such as foxes, wolves and jackals. In still others, they are deliberately persecuted due to a mistaken belief that bearded vultures kill lambs. Indeed, some of the species’ common names—including Lammergeier in German and lamb vulture in English—are based on this incorrect notion.

Another common name—bone crusher—stems from an interesting adaptation the birds have evolved to deal with their unusual diets. To break down large bones in order to reach the nutritious marrow inside, the vultures drop them from high cliffs onto rocky surfaces so they shatter.—Laura Tangley