Out of the spotlight, the Amazon today is in more trouble than ever; one of the more recent threats to the world's largest rain forest is global warming 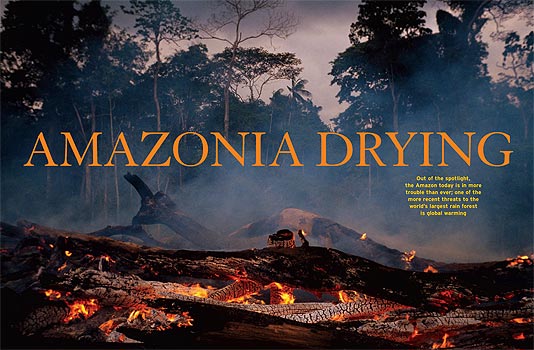 "SAVE THE AMAZON!" implored environmentalists during much of the 1980s and 1990s, a period when rampant destruction of the world's largest rain forest was also being documented in scores of books, television specials, and newspaper and magazine articles. But these days, not even a decade later, the crisis seems all but forgotten. Does that mean that the Amazon forest actually was saved?

Definitely not, responds tropical biologist Tom Lovejoy, president of the H. John Heinz III Center for Science, Economics and the Environment--and he should know. Introduced to the Amazon as a "green graduate student" in 1965, Lovejoy has spent many of the past 41 years conducting research in Brazil's portion of the forest, which accounts for two-thirds of its total. During those four decades, he has seen Amazonia's human population grow from 3 million to at least 30 million, the number of paved roads multiply from one to several dozen--and hundreds of thousands of square miles of tropical rain forest destroyed. In recent years, he says, the problem has only grown worse.

While deforestation rates inched down briefly in the mid-1990s--due in part to international pressure--they have been increasing ever since. Indeed, the years 2002 through 2004 represent the worst three-year period on record, says Lovejoy, with 2004 "the second worst year in Brazilian history." Some 10,000 square miles of forest were destroyed that year alone. According to biologist William Laurance, a senior scientist with the Smithsonian Tropical Research Institute, the region's current rate of forest loss "is roughly equivalent to an area the size of New York's Central Park disappearing every hour."

A number of forces--some old, some new--are combining to wreak the havoc. Large-scale cattle ranching, which first took off in the 1960s, is spreading faster than ever. Today, says Laurance, there are 60 million head of cattle in the Brazilian Amazon, the largest herd of any country in the world. Commercial logging of high-value timber is also booming. This practice itself may not raze forests, but the roads loggers build bring with them scores of poor, land-hungry colonists who chop down trees to grow food. Though many such logging and colonization activities are illegal, government corruption and weak enforcement often allow them to continue.

A newer threat is soybean production. According to Laurance, the area of former rain forest occupied by this $10-billion-a-year export has increased from 25 million to nearly 50 million acres in the past 15 years. A powerful political lobby, soybean growers have also successfully pushed for expensive new roads, rail routes and river channels to get their products out of the country. Some 5,000 miles of new paved roads are currently planned or under construction, says Laurance. According to biologist Daniel Nepstad of the Woods Hole Research Center and Brazil's Instituto de Pesquisa Ambiental da Amazonia, the forces driving deforestation have shifted since he began working in the region more than 20 years ago. Back then, "you could point a finger at bad government policies or land-grabbing speculators," he says. "Now it also has to do with globalization, changes in international commodity markets that ripple down to the behavior of individual farmers and ranchers." (A drop in the deforestation rate in 2005, he says, can be attributed as much to falling beef and soybean prices as to government policies cracking down on illegal activities.) In a paper published last March in Nature, Nepstad and his colleagues predict that if current trends in cattle ranching and soybean production continue, 40 percent of the Amazon forest will be gone by 2050. 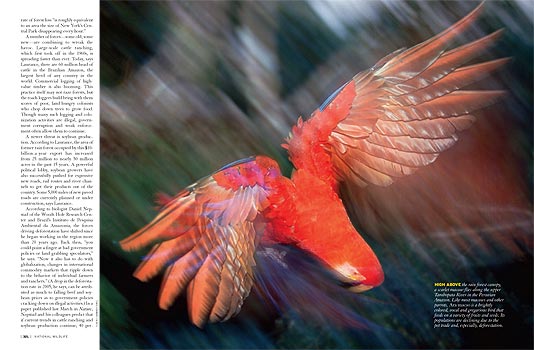 Scientists say destruction of the Amazon is a problem that should concern us all. This region not only shelters two-fifths of the world's remaining tropical rain forest, "it is the single greatest repository of biological diversity on Earth," says Lovejoy. Amazonia also contains about 20 percent of the planet's fresh river water, and it affects both regional and global climate in complex ways that are only beginning to be understood.

The news from Amazonia is not all bad, however. Lovejoy notes that since he began working in the Brazilian Amazon, the number of protected areas has increased from 1 to 238 today (though many remain on paper only). Adding up all national parks, national forests, indigenous lands, extractive reserves and other kinds of protected areas, "it turns out that 40 percent of the Brazilian Amazon is protected in some way," he says. "A few decades ago, nobody would have dreamed that was possible." 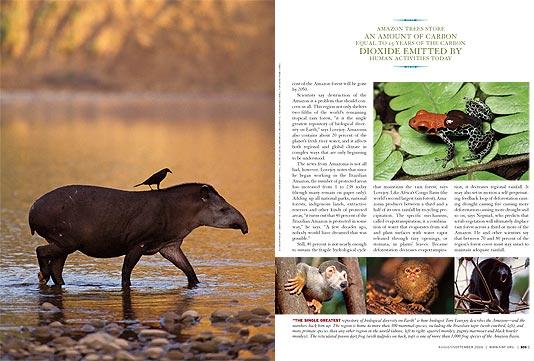 Still, 40 percent is not nearly enough to sustain the fragile hydrological cycle that maintains the rain forest, says Lovejoy. Like Africa's Congo Basin (the world's second largest rain forest), Amazonia produces between a third and a half of its own rainfall by recycling precipitation. The specific mechanism, called evapotranspiration, is a combination of water that evaporates from soil and plant surfaces with water vapor released through tiny openings, or stomata, in plants' leaves. Because deforestation decreases evapotranspiration, it decreases regional rainfall. It may also set in motion a self-perpetuating feedback loop of deforestation causing drought causing fire causing more deforestation causing more drought and so on, says Nepstad, who predicts that scrub vegetation will ultimately displace rain forest across a third or more of the Amazon. He and other scientists say that between 70 and 80 percent of the region's forest cover must stay intact to maintain adequate rainfall.

Residents got a frightening taste of what a drier Amazon might be like last fall when the worst drought in four decades hit the western part of the region. The months-long drought ignited huge forest fires, dried up major waterways, killed off fish, wildlife and crops, and stranded scores of people whose only mode of transportation is by boat. Citing the drought's impact on food, the economy and public health, the governor of the state of Amazonas declared "a state of public calamity." 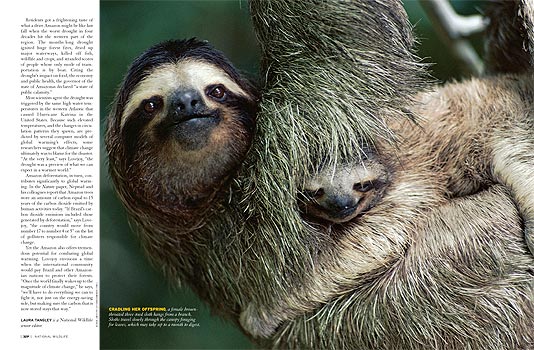 Most scientists agree the drought was triggered by the same high water temperatures in the western Atlantic that caused Hurricane Katrina in the United States. Because such elevated temperatures, and the changes in circulation patterns they spawn, are predicted by several computer models of global warming's effects, some researchers suggest that climate change ultimately was to blame for the disaster. "At the very least," says Lovejoy, "the drought was a preview of what we can expect in a warmer world."

Amazon deforestation, in turn, contributes significantly to global warming. In the Nature paper, Nepstad and his colleagues report that Amazon trees store an amount of carbon equal to 15 years of the carbon dioxide emitted by human activities today. "If Brazil's carbon dioxide emissions included those generated by deforestation," says Lovejoy, "the country would move from number 17 to number 4 or 5" on the list of polluters responsible for climate change.

Yet the Amazon also offers tremendous potential for combating global warming. Lovejoy envisions a time when the international community would pay Brazil and other Amazonian nations to protect their forests. "Once the world finally wakes up to the magnitude of climate change," he says, "we'll have to do everything we can to fight it, not just on the energy-saving side, but making sure the carbon that is now stored stays that way."