Turn Your Yard Into a Red Zone

It’s easy to identify northern cardinals by their distinctive traits—most notably the male’s fiery plumage; if you live where they do, it’s also fairly easy to woo the birds to your garden 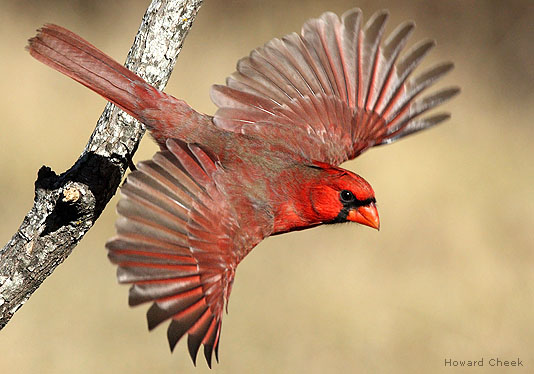 WELL-KNOWN for their physical attributes, northern cardinals are more than just pretty faces. They're also talented musicians, with both males and females singing expansive songs. And while some populations move around a great deal during winter, there is no traditional north-south migration for these birds. That means if you can interest cardinals in your yard, you may be able to enjoy their beauty and tunes year-round.

Once found only in the southeastern United States, cardinals greatly expanded their range during the last century and today can be seen throughout the eastern two-thirds of the country and parts of southern Canada. "It's possible global warming is a contributing factor to their range expansion," says Jim Pease, an extension wildlife specialist at Iowa State University, "but the most likely factor is the increasing popularity of bird feeding."

If you're fortunate enough to live in cardinal territory, it's not difficult to lure the birds to your landscape. "If you plant shrubby vegetation—preferably the varieties that will produce edible fruits—cardinals will respond," says George H. Harrison, National Wildlife field editor and backyard birding expert. The birds prefer thickets and evergreens for nesting and roosting.

"The cardinal's diet shows surprising diversity," says Marilyn Mause, a wildlife biologist with Maryland's Wild Acres Program. The birds are known to eat more than 100 kinds of seeds and fruits. Native plants that provide these foods include shrubs such as serviceberry, flowering dogwood and arrowwood viburnum, and trees such as eastern red cedar, white pine and elm. Cardinals also feed on insects, particularly during the long nesting season.

To attract cardinals to feeders, set out sunflower seeds, safflower seeds, cracked corn or apples. Place the goodies on a sturdy platform or hopper feeder near shrubs or other cover. Don't expect cardinals to use a tube feeder, says David Bonter, head of Cornell University's Project FeederWatch. The birds find its dainty cylindrical perches difficult to stand on.

Water, used for drinking and bathing, is also an important habitat element. To prevent freezing, consider maintaining a heated birdbath in cold weather.

Since cardinals are aggressive, territorial creatures, you'll probably only attract one pair during nesting season, experts say, unless your home is on a large parcel of land. Don't be startled if your new male (or female) resident suddenly begins rapping on your windows; he likely sees his reflection and believes it's a rival. If this happens, break the bird's reflection by marking the window with soap or hanging streamers on the outside.

During temperate months, cardinals are most often seen feeding at dusk and dawn. But during winter, when food is scarcer and territorial thoughts diminish, cardinals drop by throughout the day—and often bring friends. "We sometimes get 20, 30, 40 cardinals at one feeder in winter," says Bonter. "And they'll sit there all day long."

Writer Melanie Radzicki McManus is based in Wisconsin. Learn more about gardening for wildlife.


Luring the Gray Cardinal
Live in Arizona, southern California, New Mexico or Texas? Then you can also try teasing the pyrrhuloxia, or gray cardinal, into your yard. It'll be harder—pyrrhuloxias aren't quite as urbanized as their northern brethren—but it'll definitely be worth it.

"I regard the pyrrhuloxia as the single most attractive bird in the southwest," says Terry Maxwell, curator of birds at Angelo State University's Angelo State Natural History Collections. "They're stunningly beautiful." While pyrrhuloxias normally sport a crisp gray plumage, males develop a striking dark rose streak down their breast and on their face during the breeding season, accented by a bright yellow parrot-type bill.

Like northern cardinals, pyrrhuloxias prefer scrubby brush, so luxuriant shrubbery won't do. Instead, Maxwell suggests planting agarita, lotebush or small-leaf sumac, all of which are thorny plants with sweet berries. Then fill your birdfeeder with striped sunflower seeds or peanut butter suet and see who comes for dinner.—Melanie Radzicki McManus