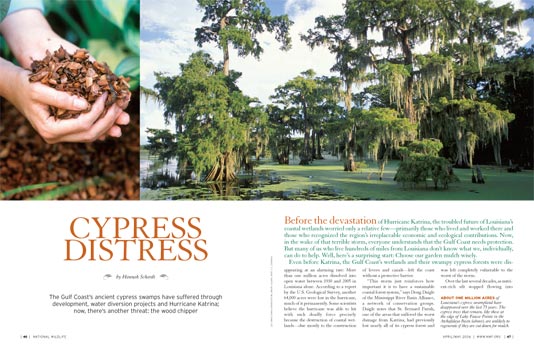 BEFORE THE DEVASTATION of Hurricane Katrina, the troubled future of Louisiana’s coastal wetlands worried only a relative few—primarily those who lived and worked there and those who recognized the region’s irreplaceable economic and ecological contributions. Now, in the wake of that terrible storm, everyone understands that the Gulf Coast needs protection. But many of us who live hundreds of miles from Louisiana don’t know what we, individually, can do to help. Well, here’s a surprising start: Choose our garden mulch wisely.

Even before Katrina, the Gulf Coast’s wetlands and their swampy cypress forests were disappearing at an alarming rate: More than one million acres dissolved into open water between 1930 and 2005 in Louisiana alone. According to a report by the U.S. Geological Survey, another 64,000 acres were lost in the hurricane, much of it permanently. Some scientists believe the hurricane was able to hit with such deadly force precisely because the destruction of coastal wetlands—due mostly to the construction of levees and canals—left the coast without a protective barrier.

“This storm just reinforces how important it is to have a sustainable coastal forest system,” says Doug Daigle of the Mississippi River Basin Alliance, a network of conservation groups. Daigle notes that St. Bernard Parish, one of the areas that suffered the worst damage from Katrina, had previously lost nearly all of its cypress forest and was left completely vulnerable to the worst of the storm.

Over the last several decades, as nutrient-rich silt stopped flowing into Louisiana’s river delta, open salt water began to replace swampy wetlands. Louisiana’s famed cypress trees, which take as much as a century to reach maturity, cannot reproduce in standing water; their seedlings require at least a short period of dryness each year in order to survive. So when a coastal cypress tree is harvested, it is very unlikely to be replaced by a new, healthy tree. Yet the Gulf Coast trees, prized for their resistance to insects and rot, continue to be logged unsustainably. Historically, Florida cypress trees were most likely to be harvested for mulch. But as mature cypress in that state becomes harder to find, Louisiana cypress trees are increasingly logged, chipped and sold as mulch in large retail stores.

“Cutting an 80-to-100-year-old cypress tree for mulch is like taking your dining room furniture and burning it for firewood—there’s a higher and better use,” says John Day, a Louisiana State University ecologist. Day is a member of the Coastal Wetland Forest Conservation and Use Science Working Group, which was formed by Louisiana’s governor before Katrina hit to study the problems facing that state’s wetlands. Those problems are considerable, according to a report the group released last spring: “Without appropriate human intervention to alleviate the factors causing degradation, most of coastal Louisiana will inevitably experience the loss of coastal wetland forest functions and ecosystem services through conversion to open water, marsh or other land uses.”

Such a loss would have dire consequences for Louisiana wildlife. At least 60 percent of all U.S. bird species, including snowy egrets, roseate spoonbills and threatened wood storks, pass through the swampy forests of the Gulf Coast. While some of the cypress on which those birds rely becomes flooring and furniture, much of it ends up as mulch in gardens across the country. 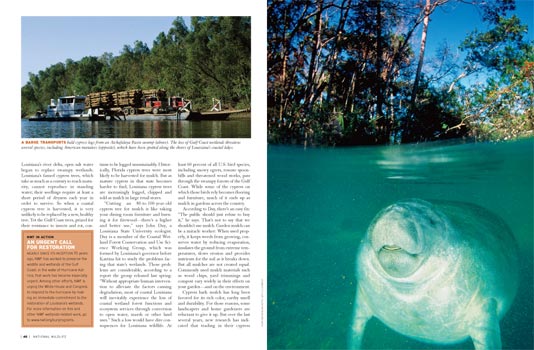 According to Day, there’s an easy fix: “The public should just refuse to buy it,” he says. That’s not to say that we shouldn’t use mulch. Garden mulch can be a miracle worker: When used properly, it keeps weeds from growing, conserves water by reducing evaporation, insulates the ground from extreme temperatures, slows erosion and provides nutrients for the soil as it breaks down. But all mulches are not created equal. Commonly used mulch materials such as wood chips, yard trimmings and compost vary widely in their effects on your garden—and on the environment. Cypress bark mulch has long been favored for its rich color, earthy smell and durability. For those reasons, some landscapers and home gardeners are reluctant to give it up. But over the last several years, new research has indicated that trading in their cypress mulch for other options may not be such a sacrifice.

“It used to be that mulch came from the highly prized bark of mature conifers,” says Dan Herms, an entomologist at Ohio State University who specializes in insect-plant interactions. “That is increasingly hard to find because it’s hard to find big trees. Now the mulch comes from immature trees and it has wood mixed in.”

Immature cypress trees have not yet developed the rot- and insect-repellent qualities valued by gardeners. That means that most cypress mulch is plain old wood chips, and researchers say wood chips are far from a gardener’s best option.

“There is absolutely nothing to be said for wood chip mulch,” says Mike McGrath, a longtime organic gardener and host of a nationally syndicated radio show on gardening. Ideally, says McGrath, mulch should contain an even mix of carbon-rich and nitrogen-rich materials. Because wood chips and bark are virtually all carbon, they tie up the available nitrogen in the soil as they decompose, leaving plants without the nutrients they need to grow.

The most nutritious garden mulch is something most gardeners already have on hand: yard waste. Researchers at the Ohio Agricultural Research Center found that composted yard waste increased the number of flowers on rhododendron plants by 300 percent over plants grown without mulch. Wood mulch gave no such benefit. McGrath says that gardeners should realize that fall leaves are a boon, not a nuisance. “I tell people to capture every fall leaf, shred them and use them as mulch,” he says. “They’ll look great and within a month they’re full of earthworms.”

Still, thousands of gardeners each year cover their gardens in cypress mulch. “We’re trying to get the word out,” says Herms. “People have a feeling that whatever you put on top of the soil has no impact on what’s under the ground. Well, we’ve shown unequivocally that it does have an impact.” And the impact doesn’t end there. Hurricane Katrina’s assault upon the Gulf Coast’s unprotected coastline has shown that what you put on top of the soil can also have consequences far beyond your garden.

Hannah Schart is an assistant editor for this magazine.

Compost: A mix of kitchen scraps and yard trimmings, composted in your own backyard, is one of the best and cheapest mulches around. As the compost breaks down, it will also act as a fertilizer for your plants. This is the best choice for traditional landscapes, but it can be difficult for a household to produce enough compost for even a small garden.

Fall leaves: Composted, they make a wonderful component in fertilizer. But even when they are simply shredded and spread around the yard, leaves make an inexpensive and effective mulch. Many towns in leafy areas will give back to gardeners communally collected and shredded leaves. Leaf mulch applied in spring will last about four months if stacked three to four inches deep.

Well-chosen bark: Bark from plantation grown—and therefore renewable—pine or other conifer trees makes a good, long-lasting mulch, especially when applied with compost or other soil conditioners. Just be sure that you’re not actually buying wood chips or bark from cypress or other environmentally threatened trees.


An Urgent Call for Restoration

Nearly since its inception 70 years ago, NWF has worked to preserve the wildlife and wetlands of the Gulf Coast. In the wake of Hurricane Katrina, that work has become especially urgent. Among other efforts, NWF is urging the White House and Congress to respond to the hurricane by making an immediate commitment to the restoration of Louisiana’s wetlands. For more information on this and other NWF wetlands-related work, go to our wildlife page.