Palau's remarkable marine lakes are portraits of evolution in action 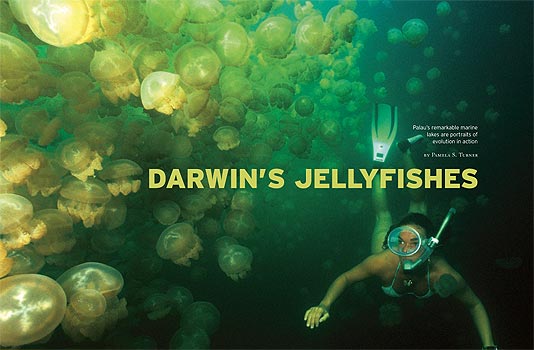 FLOATING in a silent world the color of milky green tea, I am enveloped by an undulating horde of 10 million jellyfish, some the size of cantaloupes, others the size of apples and a few no bigger than blueberries. All dance the two-step jelly ballet: pulse in, pulse out; pulse in, pulse out. Their simple rhythm is as soothing and vital as a heartbeat.

These jellies are found only in this 12-acre pocket of seawater. Known to tourists as Jellyfish Lake and to locals as Ongeim'l Tketau, it is one of about 70 marine, or saltwater, lakes in the Republic of Palau, an island nation 550 miles east of the Philippines. Though the lakes remain connected to the sea through fissures in the islands' porous limestone, they are shielded from wind and wave by high ridges covered in exuberant foliage. Sounds of the sea are muted by the music of the jungle: buzzing insects, chattering fairy terns, the eerie coo of the Micronesian pigeon. The sky is crisscrossed by fruit bats the size of hawks.

Palau's sheltered marine lakes are tiny seas imprisoned in terra firma. Five of the lakes contain unique jellyfish, each varying from its neighbors and their common ancestor in a dramatic example of the origin of species. Charles Darwin, of course, used island residents as models of his revolutionary theory. One species of bird, isolated on bits of land surrounded by water, radiated into a remarkable variety of new forms. The same forces work on marine species isolated in bits of water surrounded by land. If Darwin had stepped ashore in Palau instead of the Galapagos, the icon of evolution might be not Darwin's finches, but Darwin's jellyfishes. 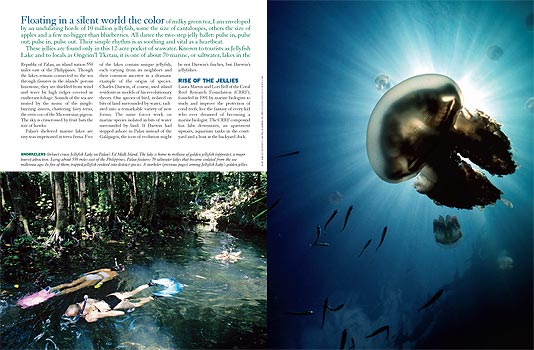 Rise of the Jellies
Laura Martin and Lori Bell of the Coral Reef Research Foundation (CRRF), founded in 1991 by marine biologists to study and improve the protection of coral reefs, live the fantasy of every kid who ever dreamed of becoming a marine biologist. The CRRF compound has labs downstairs, an apartment upstairs, aquarium tanks in the courtyard and a boat at the backyard dock.

"Lots of people have heard about the lake jellies, but there are so many misconceptions," Martin says. "Again and again we hear, 'After millions of years of isolation, they evolved into stingless farmers of algae.' None of that is accurate."

Palau's marine-lake jellyfish actually diverged very quickly from their common ancestor, the spotted jellyfish. Like other jellyfish, the spotted jellies are cnidarians, a scientific grouping that includes reef-building corals. The spotted jellyfish drift in Palau's lagoon, zapping the occasional zooplankton with their stinging nettles and absorbing the sugary by-products of photosynthesizing algae living in their tissues.

Like many jelly species, the spotted jellyfish has a multi-stage life cycle. Adult males and females with the familiar bell-shaped bodies are called medusae, but you would not recognize very young jellyfish as jellyfish at all. After medusae release eggs and sperm into the water, fertilized eggs hatch as larvae that drift for a few days before attaching to solid objects, such as rocks. The larvae morph into polyps resembling tiny anemones. Polyps can bud off into more polyps or, when conditions are right, into new young medusae. 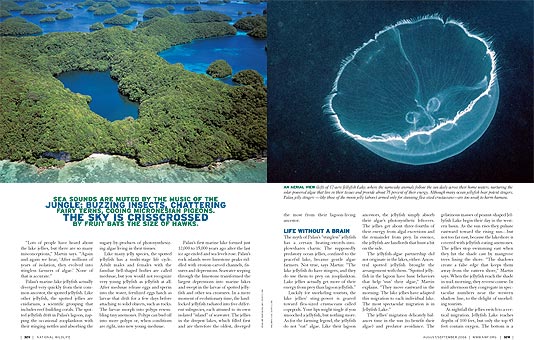 Palau's first marine lake formed just 12,000 to 15,000 years ago after the last ice age ended and sea levels rose. Palau's rock islands were limestone peaks riddled with erosion-carved channels, fissures and depressions. Seawater seeping through the limestone transformed the largest depressions into marine lakes and swept in the larvae of spotted jellyfish and other sea creatures. In a mere moment of evolutionary time, the landlocked jellyfish radiated into five different subspecies, each attuned to its own isolated "island" of seawater. The jellies in the deepest lakes, which filled first and are therefore the oldest, diverged the most from their lagoon-living ancestor.

Life Without a Brain
The myth of Palau's "stingless" jellyfish has a certain beating-swords-into-plowshares charm: The supposedly predatory ocean jellies, confined to the peaceful lake, became gentle algae farmers. Not true, says Martin: "The lake jellyfish do have stingers, and they do use them to prey on zooplankton. Lake jellies actually get more of their energy from prey than lagoon jellyfish."

Luckily for snorkeling tourists, the lake jellies' sting-power is geared toward flea-sized crustaceans called copepods. Your lips might tingle if you smooched a jellyfish, but nothing more. As for the farming legend, the jellyfish do not "eat" algae. Like their lagoon ancestors, the jellyfish simply absorb their algae's photosynthetic leftovers. The jellies get about three-fourths of their energy from algal excretions and the remainder from prey. In essence, the jellyfish are landlords that hunt a bit on the side.

The jellyfish-algae partnership did not originate in the lakes, either. Ancestral spotted jellyfish brought the arrangement with them. "Spotted jellyfish in the lagoon have basic behaviors that help 'sun' their algae," Martin explains. "They move eastward in the morning. The lake jellies have adapted this migration to each individual lake. The most spectacular migration is in Jellyfish Lake."

The jellies' migration delicately balances time in the sun (to benefit their algae) and predator avoidance. The gelatinous masses of peanut-shaped Jellyfish Lake begin their day in the western basin. As the sun rises they pulsate eastward toward the rising sun--but not too far east, because the lakeshore is covered with jellyfish-eating anemones. The jellies stop swimming east when they hit the shade cast by mangrove trees lining the shore. "The shadows create a false edge that keeps them away from the eastern shore," Martin says. When the jellyfish reach the shade in mid-morning, they reverse course. In mid-afternoon they congregate in spectacular numbers near the western shadow line, to the delight of snorkeling tourists.

At nightfall the jellies switch to a vertical migration. Jellyfish Lake reaches depths of 100 feet, but only the top 45 feet contain oxygen. The bottom is a toxic vat of hydrogen sulfide. Bacteria do a brisk business at the interface, metabolizing both the oxygen above and hydrogen sulfide below. Every night the jellies bob up and down from the surface to the bacterial layer. Besides helping the jellyfish stay in place, dipping down treats the jellies' algae to a midnight snack of nutrients excreted by the microbial masses.

While Jellyfish Lake's jellies have the most distinctive behavior, the subspecies in Ongael, Goby, Clear and Ngermeuangel Lakes have their own unique migration patterns. For example, Goby Lake lacks jellyfish-eating anemones, so its jellies do not have to avoid the shoreline. But Goby Lake is smaller and rounder than Jellyfish Lake and enclosed by very high ridges, so the Goby jellies move northeast in the afternoon to a spot where the dying rays of the sun linger the longest.

Survivor: Palau
Palau's marine lakes are menaced by climate change, invasive species and tourism. The first jolt came in 1999, when the jellyfish medusae in Jellyfish Lake perished. All of them.

Who or what was to blame? Bell, Martin and Martin's husband, Mike Dawson, believe Jellyfish Lake is extremely sensitive to the climatic throes of El Nino and La Nina. When the lake overheated from 1998 to 2000 following the 1997-98 El Nino, the adult jellyfish died by the millions. Goby Lake lost many of its older and larger medusae, while Clear Lake lost many of its younger and smaller ones. Other marine lakes appeared unaffected.

Luckily for the jellyfish, their multi-stage life cycle helps them weather environmental ups and downs. The CRRF scientists suspect that the polyps in Jellyfish Lake survived because they are more heat-tolerant than are medusae. A new generation of medusae were able to spawn when the lake cooled.

By December 2001, Jellyfish Lake pulsated with 20 million jellies. But the lake's problems were not over. In 2003, a strange anemone was discovered. "It is a classic pattern," Bell says. "The first patch was found by the dock where people get in, and the patch is radiating out."

About 90,000 tourists visited Palau in 2004. No one tallies visits to Jellyfish Lake, but it is hugely popular and easily accessible by tour boat from Koror, Palau's capital. Martin and Bell suspect a tourist brought the alien anemone into the lake, perhaps via a shell that slipped out of a pocket. Anemones can reproduce asexually from a single bit of tissue, so the invasive anemones could be the descendants of one small mistake. Although the new anemone does not eat jellyfish, it is spreading rapidly, and the ultimate impact on the lake's unique ecology cannot be predicted. CRRF scientists are trying to smother the photosynthesizing invaders beneath plastic sheets. "This is now our top conservation issue," Martin says. Efforts also are under way to regulate tourism.

One thing is certain--as long as tourists are allowed in Jellyfish Lake, people will flock here to be one with the jellies. Jellyfish are usually thought of as boneless bags of goo about as cuddly as scorpions and not much smarter than soap bubbles, but Palau's jellyfish permit visitors to appreciate intimately and painlessly their fluid grace and alien beauty.

Freelance writer Pamela S. Turner is based in California.