Cannibalism is surprisingly common in the animal world, and biologists are discovering that it often makes good evolutionary sense to eat what you are 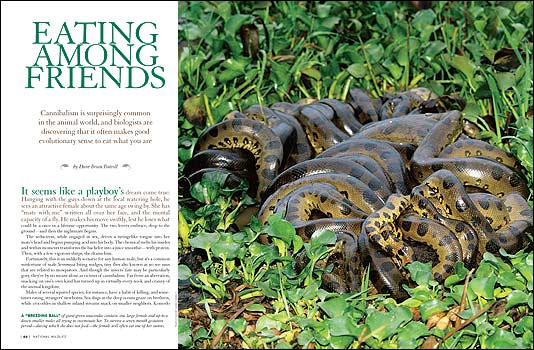 IT SEEMS LIKE a playboy's dream come true: Hanging with the guys down at the local watering hole, he sees an attractive female about the same age swing by. She has "mate with me" written all over her face, and the mental capacity of a fly. He makes his move swiftly, lest he loses what could be a once-in-a-lifetime opportunity. The two lovers embrace, drop to the ground--and then the nightmare begins.

The seductress, while engaged in sex, drives a syringelike tongue into her mate's head and begins pumping acid into his body. The chemical melts his insides and within moments transforms the bachelor into a juice smoothie--with protein. Then, with a few vigorous slurps, she drains him.

Fortunately, this is an unlikely scenario for any human male, but it's a common misfortune of male Serromyia biting midges, tiny flies also known as no-see-ums that are related to mosquitoes. And though the insects' fate may be particularly gory, they're by no means alone as victims of cannibalism. Far from an aberration, snacking on one's own kind has turned up in virtually every nook and cranny of the animal kingdom.

Males of several squirrel species, for instance, have a habit of killing, and sometimes eating, strangers' newborns. Sea slugs in the deep oceans graze on brethren, while crocodiles in shallow inland streams snack on smaller neighbors. Komodo dragons on equatorial islands spend their youth up in trees, because to mingle among adults is to court diners, while polar bears throughout the Arctic actively hunt and consume cubs and injured adults. 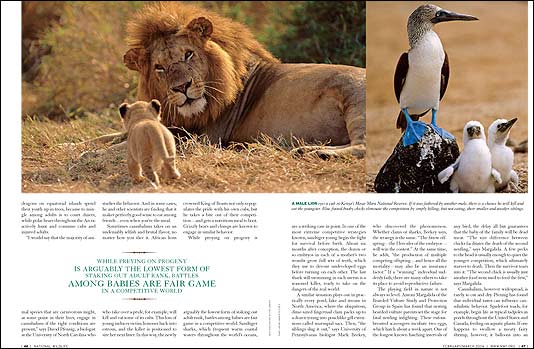 "I would say that the majority of animal species that are carnivorous might, at some point in their lives, engage in cannibalism if the right conditions are present," says David Pfennig, a biologist at the University of North Carolina who studies the behavior. And in some cases, he and other scientists are finding that it makes perfectly good sense to eat among friends--even when you're the meal.

Sometimes cannibalism takes on an undeniably selfish and brutal flavor, no matter how you slice it. African lions who take over a pride, for example, will kill and eat some of its cubs. This loss of young induces victim lionesses back into estrous, and the killer is positioned to sire her next litter. In this way, the newly crowned King of Beasts not only repopulates the pride with his own cubs, but he takes a bite out of their competition--and gets a nutritious meal to boot. Grizzly bears and chimps are known to engage in similar behavior.

While preying on progeny is arguably the lowest form of staking out adult rank, battles among babies are fair game in a competitive world. Sandtiger sharks, which frequent warm coastal waters throughout the world's oceans, are a striking case in point. In one of the most extreme competitive strategies known, sandtiger young begin the fight for survival before birth. About six months after conception, the dozen or so embryos in each of a mother's two wombs grow full sets of teeth, which they use to devour undeveloped eggs before turning on each other. The last shark still swimming in each uterus is a seasoned killer, ready to take on the dangers of the real world.

A similar situation plays out in practically every pond, lake and stream in North America, where the ubiquitous, dime-sized fingernail clam packs up to a dozen young into pouchlike gill extensions called marsupial sacs. Then, "the siblings slug it out," says University of Pennsylvania biologist Mark Beekey, who discovered the phenomenon. Whether clams or sharks, Beekey says, the strategy is the same. "The fittest offspring--the Hercules of the embryos--will win the contest." At the same time, he adds, "the production of multiple competing offspring--and hence all the mortality--may also be an insurance factor." If a "winning" individual suddenly fails, there are many others to take its place to avoid reproductive failure. 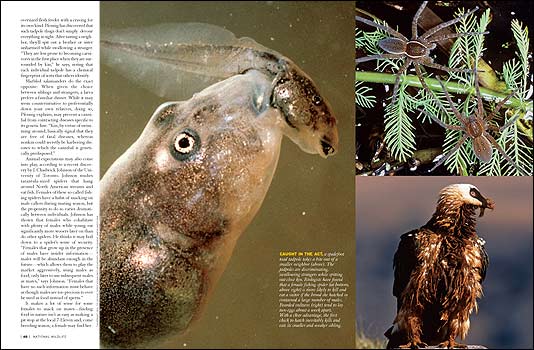 The playing field in nature is not always so level. Antoni Margalida of the Bearded Vulture Study and Protection Group in Spain has found that nesting bearded vulture parents set the stage for fatal nestling infighting. These rufous-breasted scavengers incubate two eggs, which hatch about a week apart. One of the longest known hatching intervals of any bird, the delay all but guarantees that the baby of the family will be dead meat. "The size difference between chicks facilitates the death of the second nestling," says Margalida. A few pecks to the head is usually enough to quiet the younger competition, which ultimately starves to death. Then the survivor tears into it. "The second chick is usually just another food item used to feed the first," says Margalida.

Cannibalism, however widespread, is rarely so cut and dry. Pfennig has found that individual tastes can influence cannibalistic behavior. Spadefoot toads, for example, begin life as typical tadpoles in ponds throughout the United States and Canada, feeding on aquatic plants. If one happens to swallow a meaty fairy shrimp, however, it balloons into an oversized flesh feeder with a craving for its own kind. Pfennig has discovered that such tadpole thugs don't simply devour everything in sight. After tasting a neighbor, they'll spit out a brother or sister unharmed while swallowing a stranger. "They are less prone to becoming carnivores in the first place when they are surrounded by kin," he says, noting that each individual tadpole has a chemical fingerprint of sorts that others identify.

Marbled salamanders do the exact opposite: When given the choice between siblings and strangers, a larva prefers a familiar dinner. While it may seem counterintuitive to preferentially down your own relatives, doing so, Pfennig explains, may prevent a cannibal from contracting diseases specific to its genetic line. "Kin, by virtue of swimming around, basically signal that they are free of fatal diseases, whereas nonkin could secretly be harboring diseases to which the cannibal is genetically predisposed."

Animal expectations may also come into play, according to a recent discovery by J. Chadwick Johnson of the University of Toronto. Johnson studies tarantula-sized spiders that hang around North American streams and eat fish. Females of these so-called fishing spiders have a habit of snacking on male callers during mating season, but the propensity to do so varies dramatically between individuals. Johnson has shown that females who cohabitate with plenty of males while young eat significantly more wooers later on than do other spiders. He thinks it may boil down to a spider's sense of security. "Females that grow up in the presence of males have insider information--males will be abundant enough in the future--which allows them to play the market aggressively, using males as food, only later to use subsequent males as mates," says Johnson. "Females that have no such information must behave as though males are too precious to ever be used as food instead of sperm."

It makes a lot of sense for some females to snack on mates--finding food in nature isn't as easy as making a pit stop at the local 7-Eleven and, come breeding season, a female may find herself swimming in lip-smacking cuisine. Such is the case with giant green anacondas in South America. These semiaquatic snakes mate in "breeding balls," in which one large female intertwines with up to a dozen smaller males who do their best to inseminate her. After the orgy, a pregnant mother gets a serious case of the munchies. The snake's cannibalistic cravings became all too obvious a few years back. After researchers in Venezuela captured a nearly 15-foot, 90-pound female near a breeding aggregation, she regurgitated a male about two-thirds her body length. The scientists believe that an anaconda mother-to-be cannibalizes to get through pregnancy. Throughout her entire seven-month gestation period, the female does not feed. Eating a male--at a time when they're around in abundance--likely serves as a last supper before fasting.

Such "sexual cannibalism" is essentially unheard of in vertebrates but is standard mating protocol among many insects and arachnids. From crickets to praying mantises and scorpions, a female may munch her mate before, during or after sex. Further, males often set themselves up for sacrifice--and for good reason. Life spans are short and finding mates is difficult. Once you're there, you'd better do what you can to ensure parenthood.

Take Serromyia, the bachelor biting midge, for example. After getting the life sucked out of him, his genitals usually break off, still clasped onto his mate. "It makes all of us guys sort of cross our legs," says midge expert Art Borkent, a research associate with the Royal British Columbia Museum in Canada. But he points out that males may get the last laugh after all. "Once he passes sperm to the female, he doesn't want others mating with her. By giving up his tool, he physically blocks future matings, ensuring that it's his sperm that fertilize her eggs."

In the end, cannibalism is the best thing that could ever happen to a bachelor biting midge. If a midge could reason, Borkent says, he may be thinking, "I've been chosen by this female. I know my sperm is going to make it. And I'm a success."

Dave Brian Butvill, a Costa Rica-based science writer, would like to thank his parents and big brother for not eating him.

Despite the warm and fuzzy feeling associated with bird nests and rodent dens, the cozy quarters of many animals are, in fact, microcosms of murder. From seabirds to spotted hyenas, brothers and sisters kill their siblings in a competitive bid to survive known as siblicide. Stopping short of cannibalism, siblicide is often a way to trim the competition for limited resources.

An older blue-footed booby chick, for example, will relentlessly peck to death--but not eat--its nestmate, while black-crowned night heron nestlings may swallow a sibling's head until the chick suffocates. Spotted hyena pups, normally born as twins, are equipped with fully erupted teeth and an aptitude for destruction: Within minutes of birth, each latches onto the other's neck and thrashes vigorously. Only one usually walks away alive.

Murder, however, is not limited to infant infighting. Meerkat mothers engage in infantcide, killing offspring of subordinates which, in meerkat society, are expected to help raise the matriarch's progeny rather than produce their own.

But perhaps the most perplexing assassin is none other than Flipper. Bottlenose dolphin males target harbor porpoises, ramming and lacerating them to death by the dozen. Though related to bottlenoses, porpoises eat different fish, so are not competing for resources. Scientists suspect that bottlenose males may be practicing baby-killing techniques. Dolphin young are about the same size as porpoises and are also frequent victims of adult aggression, for a logical reason from the male's point of view: A mother dolphin will not breed--unless her calf dies young. --Dave Brian Butvill