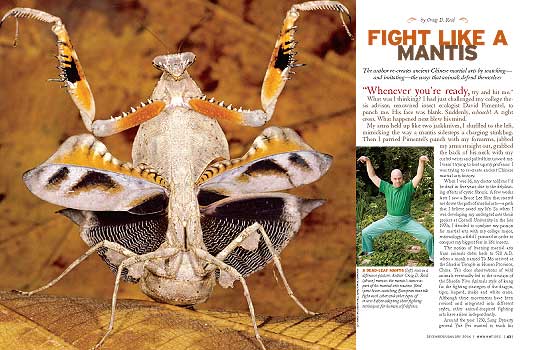 "Whenever you're ready, try and hit me."

What was I thinking? I had just challenged my college thesis advisor, renowned insect ecologist David Pimentel, to punch me. His face was blank. Suddenly, whoosh! A right cross. What happened next blew his mind.

My arms held up like two jackknives, I shuffled to the left, mimicking the way a mantis sidesteps a charging stinkbug. Then I parried Pimentel's punch with my forearms, jabbed my arms straight out, grabbed the back of his neck with my curled wrists and pulled him toward me. I wasn't trying to beat up my professor. I was trying to re-create ancient Chinese martial arts history.

When I was 16, my doctor told me I'd be dead in five years due to the debilitating effects of cystic fibrosis. A few weeks later I saw a Bruce Lee film that started me down the path of martial arts--a path that I believe saved my life. So when I was developing my undergraduate thesis project at Cornell University in the late 1970s, I decided to combine my passion for martial arts with my college major, entomology, a field I pursued in order to conquer my biggest fear in life: insects.

The notion of learning martial arts from animals dates back to 520 A.D. when a monk named Ta Mo arrived at the Shaolin Temple in Henan Province, China. Ta's close observations of wild animals eventually led to the creation of the Shaolin Five Animals style of kung fu: the fighting strategies of the dragon, tiger, leopard, snake and white crane. Although these movements have been revised and integrated into different styles, other animal-inspired fighting arts have arisen independently.

Around the year 1250, Sung Dynasty general Yue Fei wanted to teach his troops a better way to fight the invading Mongolians. Inspired by watching an eagle fight, Yue brandished his thumbs and fore and middle fingers like an eagle's talons and practiced flesh-tearing techniques. A 13th-century Shaolin monk invented taiji (tai chi) after witnessing a fight between a white crane and a snake. In the 1800s, an inmate in a Chinese prison observed the movements of nearby chattering monkeys and created monkey-style kung fu. Then, of course, there is the animal that captured my imagination: the praying mantis. 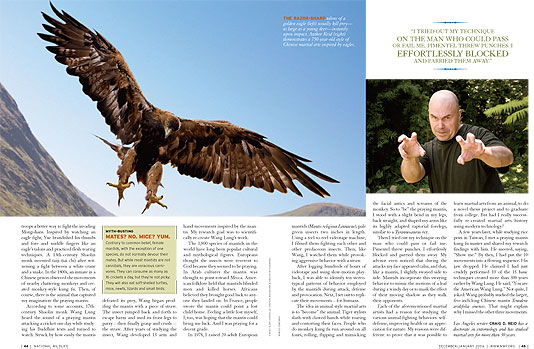 According to some accounts, 17th-century Shaolin monk Wang Lung heard the sound of a praying mantis attacking a cricket one day while studying his Buddhist texts and turned to watch. Struck by how easily the mantis defeated its prey, Wang began prodding the mantis with a piece of straw. The insect jumped back and forth to escape harm and used its front legs to parry--then finally grasp and crush--the straw. After years of studying the insect, Wang developed 13 arm and hand movements inspired by the mantis. My research goal was to scientifically re-create Wang Lung's work.

The 1,800 species of mantids in the world have long been popular cultural and mythological figures. Europeans thought the insects were reverent to God because they seemed to be praying. In Arab cultures the mantis was thought to point toward Mecca. American folklore held that mantids blinded men and killed horses. Africans believed they brought good luck to anyone they landed on. In France, people swore the mantis could point a lost child home. Feeling a little lost myself, I, too, was hoping that the mantis could bring me luck. And I was praying for a decent grade.

In 1978, I raised 20 adult European mantids (Mantis religiosa Linnaeus), pale green insects two inches in length. Using a reel-to-reel videotape machine, I filmed them fighting each other and other predaceous insects. Then, like Wang, I watched them while provoking aggressive behavior with a straw.

After logging hundreds of hours of videotape and using slow-motion playback, I was able to identify ten stereotypical patterns of behavior employed by the mantids during attack, defense and provocation. Next, I set out to replicate their movements--for humans.

The idea in animal-style martial arts is to "become" the animal. Tiger stylists slash with clawed hands while roaring and contorting their faces. People who do monkey kung fu run around on all fours, rolling, flipping and mimicking the facial antics and screams of the monkey. So to "be" the praying mantis, I stood with a slight bend in my legs, back straight, and shaped my arms like its highly adapted raptorial forelegs, similar to a Tyrannosaurus rex.

Then I tried out my technique on the man who could pass or fail me. Pimentel threw punches. I effortlessly blocked and parried them away. My advisor even noticed that during the attacks my face appeared calm, and that, like a mantis, I slightly swayed side to side. Mantids incorporate this swaying behavior to mimic the motions of a leaf during a windy day or to mask the effect of their moving shadow as they stalk their opponents.

Each of the aforementioned martial artists had a reason for studying the various animal fighting behaviors: self-defense, improving health or an appreciation for nature. My reasons were different: to prove that it was possible to learn martial arts from an animal, to do a novel thesis project and to graduate from college. But had I really successfully re-created martial arts history using modern technology?

A few years later, while studying rice pests in Taiwan, I met a praying mantis kung fu master and shared my research findings with him. He sneered, saying, "Show me." By then, I had put the 10 movements into a flowing sequence. His jaw dropped. He claimed I had just crudely performed 10 of the 13 basic techniques created more than 300 years earlier by Wang Lung. He said, "You are the American Wang Lung." Not quite, I joked: Wang probably studied the larger, five-inch-long Chinese mantis Tenodera aridifolia sinensis. That might explain why I missed the other three movements.

Los Angeles writer Craig D. Reid has a doctorate in entomology and has studied martial arts for more than 30 years.