Fishing for a Future 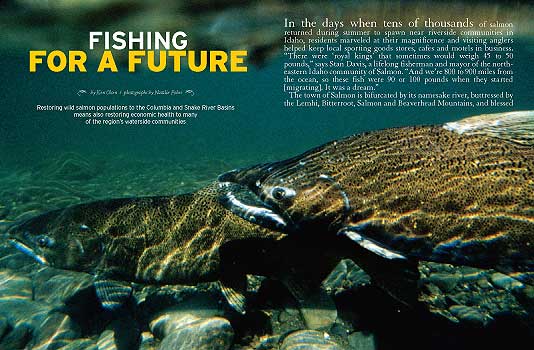 IN THE DAYS when tens of thousands of salmon returned during summer to spawn near riverside communities in Idaho, residents marveled at their magnificence and visiting anglers helped keep local sporting goods stores, cafes and motels in business. "There were 'royal kings' that sometimes would weigh 45 to 50 pounds," says Stan Davis, a lifelong fisherman and mayor of the northeastern Idaho community of Salmon. "And we're 800 to 900 miles from the ocean, so these fish were 90 or 100 pounds when they started [migrating]. It was a dream."

The town of Salmon is bifurcated by its namesake river, buttressed by the Lemhi, Bitterroot, Salmon and Beaverhead Mountains, and blessed with clean air, clear water and miles of excellent salmon habitat. It once attracted so much fishing business that many merchants flourished solely because of the May through July salmon season. "We were the supply hub for all of that activity of catching fish," Davis says.

Salmon numbers dropped dramatically on the Salmon River (a tributary of the Snake River) when construction of the four lower Snake River dams began in the 1960s, however. The community had its last robust salmon fishing season in 1978, four years after the last of those dams was completed.

Today, few wild fish make the pilgrimage there. But if Idaho's wild salmon runs were restored to fishable levels--about 100,000 adult fish returning each year--"a conservative estimate would be a $20 million boost to our town," says Davis, whose community has a population of 3,100.

The Columbia and Snake River Basins cover nearly 260,000 square miles--an area larger than France--and once boasted the most productive salmon waters in the world. Despite repeated human-inflicted damage to their habitat, tens of thousands of coho, sockeye and chinook salmon still swam past Lewiston, Riggins, Salmon and other communities as recently as the late 1970s, returning to spawn in the streams where they were born. But today, coho are extinct in the Snake River and sockeye are almost gone.

The decline is especially tragic because most salmon are so proficient at finding their way to their natal waters by retracing an olfactory trail imprinted on their brains, says Thomas P. Quinn, fisheries biologist at the University of Washington and author of The Behavior and Ecology of Pacific Salmon & Trout. The odors arise from the chemical signature of an individual stream, generated by its particular blend of rocks, plants and soil. This homing allows salmon to adapt to a variety of different stream conditions, including water temperature, disease and predators.

Scientists suspect that salmon learn different odors at different times in their life cycle, including downriver migration. In fact, the same thyroid hormones that prompt salmon to migrate to the ocean also prompt the fish to imprint odors that will lead them home.

"A larval salmon might learn an odor as it incubates in a tributary to [Idaho's] Redfish Lake, then another odor a year later as a smolt--as it leaves and migrates down the outlet of the lake--then another one at the confluence of the Snake and Columbia Rivers, and so forth," Quinn says.

This olfactory map is triggered when salmon begin the freshwater portion of their journey home. Scientists believe there also is a genetic component to homing, but it is not well understood.

Nearly all salmon that survive to adulthood have this homing ability. Survival is the key. The four lower Snake River dams in Washington, for example, are lethal for smolts trying to make their way to the ocean. Dams dramatically delay the smolts' time-sensitive migration to the ocean, increasing mortality from disease and predation and compromising the juvenile salmons' transformation from freshwater to saltwater fish. The reservoirs behind the dams increase water temperatures to unhealthy levels and provide ideal conditions for salmon predators.

Dams also can indirectly thwart salmon's homing ability. That's because some juvenile salmon are collected at hatcheries or at various dams and hauled to the lower end of the Columbia River, or even into the ocean, by truck or barge. This out-of-river migration not only stresses the fish, it also interferes with salmon making the olfactory map for their return journey.

This is one of many reasons why the National Wildlife Federation has pushed for removal of the four lower Snake River dams. "The government's own analysis declared that removing the four lower Snake River dams would be the surest way to recover fish in this system, all of which are currently either extinct or protected as threatened and endangered species," says Jan Hasselman, an attorney in NWF's Western Natural Resource Center in Seattle. "An American Fisheries Society study says that the recovery of Snake River basin salmon and steelhead will be assured if we remove these dams."

"It's illogical to me, and almost offensive, to say the dams are not an important factor in the mortality of juveniles and adult salmon," Chapman says. "Survival of downstream and upstream migrant salmon can be markedly enhanced if the four lower Snake River dams are breached."

Chapman also was compelled, he says, to change his position because of a variety of other factors. These include global warming, evidenced, in part, by a 1.5 degree C rise in the summer temperature of the main Columbia River.

Summer water temperatures already stress juvenile salmon that are migrating downstream to the ocean, notes Chapman, and the temperatures are expected to increase to the point that they begin to become lethal to these salmon. Warmer temperatures also exacerbate predation and disease. "You can't change the weather," he says. "You can't change the ocean. What's left are the principal man-caused mortality factors, including dams. I think we need to get moving on changing this situation." Removing dams to restore salmon also means restoring troubled economies. "Studies consistently show that restoring salmon to their 1950s populations in the Columbia and Snake River Basins would mean billions of dollars per year in income and economic activity for the Northwest," says Hasselman. "That's why more than 1,100 business owners in the region--men and women whose jobs and payrolls depend on salmon--recently signed a letter to Congress asking lawmakers to consider removing these few low-value dams on Washington state's portion of the Snake River that have exacted the highest cost on salmon runs."

In short, Hasselman adds, "If we want salmon back in our rivers and rural towns back on their feet, we must embrace a bold vision that involves bypassing the lowest value dams while providing workable alternatives for those who use the current system." Restoring recreational salmon and steelhead fishing could pump as much as $544 million into Idaho's economy alone, according to a study by Boise-based economist Don C. Reading.

This message of economic hope resonates across the region's beleaguered rural communities. "We're one of those old timber communities that lost its saw mill years ago and pretty much depends on tourism--fishing, whitewater rafting and hunting," says Bob Zimmerman, mayor of Riggins, Idaho. "When we have good fishing seasons, our economy does very well."

Even some officials in Lewiston, Idaho, which became a seaport by virtue of the four lower Snake River dams and their associated navigation locks, say it's time for the dams to go. "One of the few areas in the state that isn't growing at a fairly decent rate is Lewiston," says City Councilman John Barker. "My community may have its dams, but it won't have a certain future until salmon are restored."

Oregon journalist Ken Olsen wrote about the Copper River Delta in Alaska in the December/January 2005 issue.

NWF Priority: Restoring Wild Salmon Populations
As part of its ongoing work to help restore salmon and steelhead populations in the Pacific Northwest, NWF is actively involved in legal efforts to remove the four dams on the lower Snake River in Washington that represent deadly obstacles to the survival of migrating fish. "The Snake River is one of the few places left that has the potential to support large numbers of salmon and steelhead for future generations," says NWF President Larry Schweiger. "This can only happen when the dams are removed." Elsewhere in the region, NWF is focusing on restoring the near-shore ecosystem in Puget Sound, particularly the Skagit River estuary, which will make a major difference in chinook recovery. To learn more about these and other salmon-related projects, see what we do.