At the northern edge of the species' range, a growing number of grizzlies are eking out a living in territory traditionally dominated by polar bears 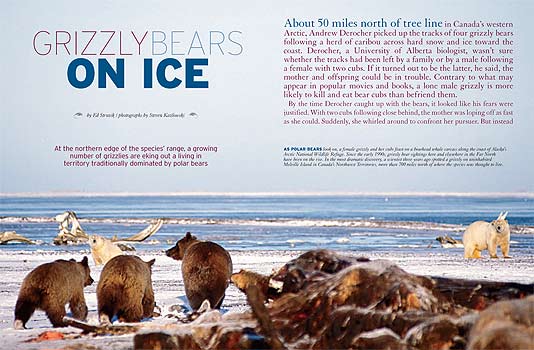 ABOUT 50 MILES NORTH of tree line in Canada's western Arctic, Andrew Derocher picked up the tracks of four grizzly bears following a herd of caribou across hard snow and ice toward the coast. Derocher, a University of Alberta biologist, wasn't sure whether the tracks had been left by a family or by a male following a female with two cubs. If it turned out to be the latter, he said, the mother and offspring could be in trouble. Contrary to what may appear in popular movies and books, a lone male grizzly is more likely to kill and eat bear cubs than befriend them.

By the time Derocher caught up with the bears, it looked like his fears were justified. With two cubs following close behind, the mother was loping off as fast as she could. Suddenly, she whirled around to confront her pursuer. But instead of beginning a bloody brawl, the bears stopped inches short of one another with no sign of aggression. "These four animals are together," concluded Derocher. "The female just turned around to check on her largest cub."

Known as "barren ground grizzlies," the bears Derocher observed are the same species of grizzly that inhabits the Rockies in southern Canada, the interior and coastal regions of British Columbia and Alaska and, in the Lower 48, Montana, Wyoming, northern Idaho and the North Cascades of Washington. Here, at the northern edge of the species' range--where the bears roam from the North Slope of Alaska to the coast of Canada's Hudson Bay--grizzlies look almost identical to their southern kin, but are only about two-thirds their size.

Barren ground grizzlies are among the most enigmatic of Arctic mammals. Few in number and rarely seen, they are as much myth as reality. Discovering how the bears manage to make a living in a treeless landscape that is covered in snow and ice for as long as nine months a year is one of the objects of Derocher's studies. But what really intrigues him are reports of more and more grizzlies showing up on sea ice, territory traditionally dominated by polar bears.

Researchers know that barren ground grizzlies feed on alpine hedysarum in spring, horsetail and bearflower in summer and berries in fall. They also dig up Arctic ground squirrels and other small mammals. Caribou, however, may be the most important compensation for the constraints these animals face. Biologists have found that the more a bear population feeds on caribou or other meat, the higher its densities are likely to be and the more successful an individual bear will be at reproducing. 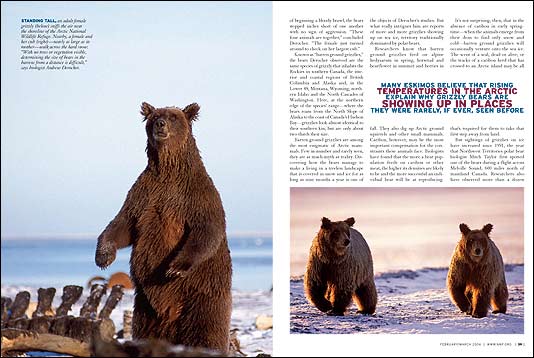 It's not surprising, then, that in the absence of caribou in early springtime--when the animals emerge from their dens to find only snow and cold--barren ground grizzlies will occasionally venture onto the sea ice. The scent of a seal, dead or alive, or the tracks of a caribou herd that has crossed to an Arctic island may be all that's required for them to take that first step away from land.

But sightings of grizzlies on ice have increased since 1991, the year that Northwest Territories polar bear biologist Mitch Taylor first spotted one of the bears during a flight across Melville Sound, 600 miles north of mainland Canada. Researchers also have observed more than a dozen bears on Banks and Victoria Islands, 100 or more miles north of the mainland, and at least one has been spotted on Hudson Bay, where it appeared to be searching for seals.

The most startling discovery so far came in 2003, when Canadian glaciologist John England spied a grizzly along a river valley on uninhabited Melville Island. Not only was the bear more than 700 miles north of where scientists would have expected it to be, it was roly-poly and in as good a shape as a healthy grizzly could be.

England, who had worked 40 years in the Arctic, was flabbergasted by what he saw that day. The following year, researchers found fresh tracks and hair in the same area. DNA analysis of the hair samples showed that the bear had come from a population along the central Arctic coast of Canada more than 600 miles away. "The clear implication was that this grizzly had denned somewhere up around Melville, far from where grizzly bears are normally found," says England. "Presumably, it was feeding on muskoxen because apart from the occasional caribou you see high up on the Arctic islands there isn't much else for them to eat."

What grizzlies are actually doing up there in the kingdom of their great white cousins is not clearly understood. Biologists have long considered the differences between the two bears significant enough to warrant separate species status. Physical distinctions are obvious: Polar bears are white rather than brown, which helps camouflage the predators from their prey on the sea ice. They are also generally larger, and have heads and bodies that are much more elongated, and therefore better adapted to penetrate seal lairs. Their larger, sharper teeth allow them to tear up seals efficiently, and shorter claws and larger feet make it easier for polar bears to travel on sea ice and swim across great expanses of water.

Many Eskimos believe that rising temperatures in the Arctic explain why grizzly bears--as well as marten, wolverines and several other species of birds and mammals--are showing up in extreme northern places where they were rarely, if ever, seen before. Global warming, they say, is creating conditions that are more favorable for these animals, at least in the short term.

While most scientists see that idea as a genuine possibility, experts like Canadian Wildlife Service biologist Ian Stirling, who has studied polar bears for more than 30 years, suspects that some grizzlies have always been venturing onto the ice. Perhaps, Stirling says, "what we're witnessing today is behavior similar to the evolutionary process that resulted in polar bears filling a rich but vacant niche as supreme predator of the sea ice."

Like all creatures, barren ground grizzlies will continue to adapt and evolve. But just how successful they will be is unclear. Warmer temperatures that are already melting Arctic sea ice are also hitting caribou hard in places like the northern Yukon and Alaska, where the Porcupine caribou herd has dropped from an estimated 178,000 in 1989 to 123,000 today. The theory is that warmer spring days followed by cold snaps are making it harder for caribou to crater through the hard snow. Desperate for food, the animals are driven into windswept hills where they are more vulnerable to wolves, bears and the debilitating effects of malnutrition. 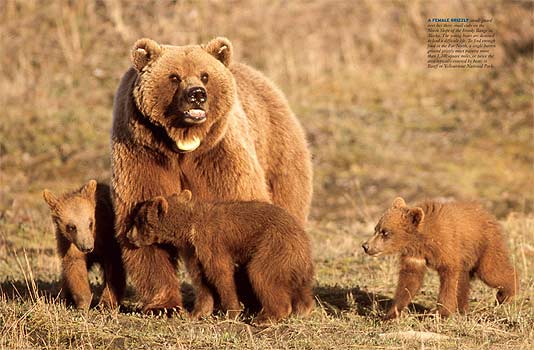 If caribou populations shrink dramatically, Derocher doesn't see much of a future for grizzlies in the Arctic. Nor does he see the bears moving north if a warming climate is going to melt sea ice. Another predicted consequence of climate change--northern migration of the tree line--may also hurt grizzlies; research has shown that the bears survive better in the barrens than they do in boreal forest.

What worries Derocher even more, though, are massive oil, gas and pipeline developments planned for Alaska and northern Canada. While the United States considers development in Alaska's Arctic National Wildlife Refuge, the Canadian government is fast-tracking a $5-billion natural gas pipeline down the Mackenzie Valley from the Beaufort Sea.

"This is a population at the edge," says Derocher. "They're at the edge of their northern range. They're smaller and they're resource poor. They have to work a lot harder to make a living up here." Add a pipeline, oil and gas wells and a road to their habitat, he says, "and it becomes pretty apparent that these animals are going to be challenged."

For now, though, the Arctic remains one of the last strongholds for grizzlies in North America. Farther south, many populations are struggling with industrial development and other human activity. During last year's field season, Derocher was heartened by the sight of the four grizzlies he had observed the year before. Somehow, in a wilderness that is frozen over for three-quarters of the year, this large family had found a way to make it through another winter.

Ed Struzik is a Canadian freelance writer and photographer based in Edmonton, Alberta.

Aklak vs. Nanook: A Tale of Two Bears
Like most scientists, the Inuit view Aklak, the grizzly bear, and Nanook, the polar bear, as two very different creatures. Their traditional tales of polar bears almost always portray these animals as powerful, keen-witted and worthy of great esteem. The grizzly, on the other hand, is seen as a more sinister beast, one that is likely to charge unexpectedly in an explosive manner.

Some biologists might agree with that assessment, citing evidence that barren ground grizzlies appear to be more aggressive than grizzlies living farther south. One explanation, they say, could be that northern grizzlies evolved in a treeless world where there's no place to hide, so threatening one's opponent may make far more sense than fleeing.

Whatever the reason, bear biologist Andrew Derocher says he is "a lot more comfortable capturing a big polar bear on the sea ice than a small grizzly on land. Grizzlies tend to react much more aggressively. It can be very unnerving."

NWF Priority: Guarding Grizzlies
For several years, NWF and its affiliates have been working to bring back the grizzly bear to areas in Western states where the species' populations plummeted beginning in the 1800s. In the Yellowstone Ecosystem, such actions--which include habitat restoration and reducing conflicts with ranchers--have been so successful that the species may soon be removed from the federal Endangered Species List. More recently, NWF has been combating global warming, which poses a special threat to Arctic ecosystems and their inhabitants, including the barren ground grizzly. To learn more, go to www.nwf.org/globalwarming.

Polar Bear Meltdown
As global warming causes Arctic sea ice to melt earlier each year, barren ground grizzlies and polar bears may come in contact more often if the great white bears are unable to reach their traditional prey--seals, which they hunt from ice floes--and are forced to go after land animals like caribou, a favorite fare of grizzly bears. If the two species must compete for prey, grizzlies are likely to prevail because they are the more aggressive of the two bears.

Already, there is evidence that polar bears are suffering as a result of global warming: Along the western shore of Canada's Hudson Bay, biologists have found that the bears weigh less and give birth to fewer cubs than they did two decades ago, when the ice was melting two weeks later than it does today.

The most recent, and dramatic, bad news about the bears emerged last December, when researchers discovered some 40 polar bears swimming as far as 60 miles off the northern coast of Alaska. At least 4 of the animals drowned. While polar bears can swim short distances between ice floes, disappearing ice may increasingly force them to swim longer distances, making it more likely that the bears will tire and drown.--Laura Tangley