By cultivating gardens based on native plant communities, homeowners can help a surprisingly large number of species 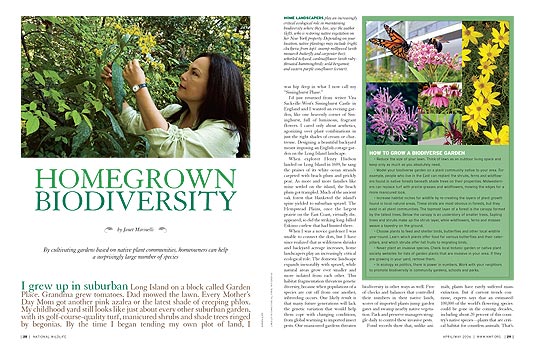 I GREW UP in suburban Long Island on a block called Garden Place. Grandma grew tomatoes. Dad mowed the lawn. Every Mother's Day Mom got another pink azalea or the latest shade of creeping phlox. My childhood yard still looks like just about every other suburban garden, with its golf-course-quality turf, manicured shrubs and shade trees ringed by begonias. By the time I began tending my own plot of land, I was hip deep in what I now call my "Sissinghurst Phase."

I'd just returned from writer Vita Sackville-West's Sissinghurst Castle in England and I wanted an evening garden, like one heavenly corner of Sissinghurst, full of luminous, fragrant flowers. I cared only about aesthetics, agonizing over plant combinations in just the right shades of cream or chartreuse. Designing a beautiful backyard meant imposing an English cottage garden on the Long Island landscape.

When explorer Henry Hudson landed on Long Island in 1609, he sang the praises of its white ocean strands carpeted with beach plum and prickly pear. As more and more families like mine settled on the island, the beach plum got trampled. Much of the ancient oak forest that blanketed the island's spine yielded to suburban sprawl. The Hempstead Plains, once the largest prairie on the East Coast, virtually disappeared; so did the striking long-billed Eskimo curlew that had hunted there.

When I was a novice gardener I was unable to connect the dots, but I have since realized that as wilderness shrinks and backyard acreage increases, home landscapers play an increasingly critical ecological role. The domestic landscape expands inexorably with sprawl, while natural areas grow ever smaller and more isolated from each other. This habitat fragmentation threatens genetic diversity, because when populations of a species are cut off from one another, inbreeding occurs. One likely result is that many future generations will lack the genetic variation that would help them cope with changing conditions, from global warming to imported insect pests. Our manicured gardens threaten biodiversity in other ways as well. Free of checks and balances that controlled their numbers in their native lands, scores of imported plants jump garden gates and swamp nearby native vegetation. Park and preserve managers struggle daily to control these invasive pests.

Fossil records show that, unlike animals, plants have rarely suffered mass extinction. But if current trends continue, experts says that an estimated 100,000 of the world's flowering species could be gone in the coming decades, including about 20 percent of this country's native species--plants that are critical habitat for countless animals. That's why, in this age of accelerating extinctions, we ought to create gardens that are not just beautiful but also promote biodiversity--gardens designed to preserve not only individual species but also entire habitats. The way to do this is to use native plant communities as our models.

Cultivating our regions' native plants also supports pollinating birds and insects, which in turn helps bolster diminishing gene pools. By creating gorgeous habitat gardens, we can improve the lot of a large number of plants and animals. These horticultural creations enable species to form the sorts of mutually beneficial relationships with other plants and animals that allow them to prosper and reproduce, adding over time to biodiversity.

Today my husband Don and I share a woodland garden with ospreys, northern flickers, eastern box turtles and many other creatures on Shelter Island, a sleepy isle sandwiched between the North and South Forks of eastern Long Island. The property is contiguous with a slender sliver of coastal forest, what remains of the once-awesome wooded canopy that covered almost the entire island, rimmed by dunes and broken only occasionally by bays and marshes.

To augment this shrunken fragment of wild woodland, we've planted exclusively native species. In front of the house, we're helping what was a struggling lawn beneath black and white oaks to revert back to forest. We're also restoring the dogwoods, shadbush and blueberries that grow beneath the tall oaks in local woodlands. And we've created a mini-meadow of native grasses and wildflowers. Our Shelter Island garden reflects a growing national trend. Many gardeners in the Midwest are reseeding native tallgrass prairie. In Arizona, homeowners are creating desert gardens where cacti and ocotillos grow in a sea of native wildflowers that nurtures butterflies and hummingbirds. In South Florida, landscapers are replanting lush hardwood hammocks. California gardeners are restoring coastal chaparral.

Someday, hopefully, thousands of biodiverse gardens may link up, forming a network of green corridors crisscrossing the country, helping native animal populations to reconnect. With such land bridges, we can supplement parks and nature preserves, transforming lonely islands of wilderness into a functional unit big enough to ensure the survival of thousands of species. Planting these gardens can be our great gift to future generations.

How to Grow a Biodiverse Garden

Reduce the size of your lawn. Think of lawn as an outdoor living space and keep only as much as you absolutely need.

Model your biodiverse garden on a plant community native to your area. For example, people who live in the East can replant the shrubs, ferns and wildflowers found in native forests beneath shade trees on their properties. Midwesterners can replace turf with prairie grasses and wildflowers, mowing the edges for a more manicured look.

Increase habitat niches for wildlife by re-creating the layers of plant growth found in local natural areas. These strata are most obvious in forests, but they exist in all plant communities. The topmost layer of a forest is the canopy formed by the tallest trees. Below the canopy is an understory of smaller trees. Sapling trees and shrubs make up the shrub layer, while wildflowers, ferns and mosses weave a tapestry on the ground.

Choose plants to feed and shelter birds, butterflies and other local wildlife year-round. Learn which plants offer food for various butterflies and their caterpillars, and which shrubs offer fall fruits to migrating birds.

Never plant an invasive species. Check local botanic garden or native plant society websites for lists of garden plants that are invasive in your area. If they are growing in your yard, remove them.

Work with your neighbors to promote biodiversity in community gardens, schools and parks. In ecology as politics, there is power in numbers.