Kingdom of the Condor

From the shores of the Caribbean to Cape Horn at the doorstep of Antarctica, the Andes are home to some of the world's rarest and most spectacular wildlife 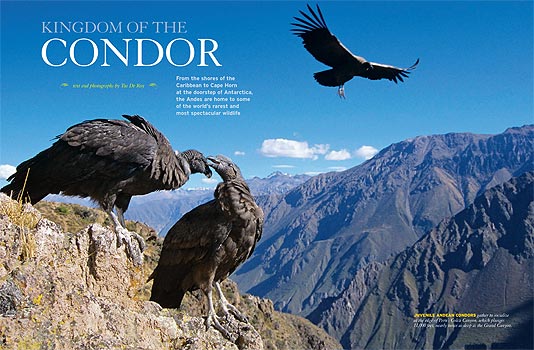 PICTURE A SINGLE mountain chain of rock and ice, smoldering volcanoes and needle-sharp granite spires stretching uninterrupted for 4,500 miles—about the distance from New York to Moscow—down the length of the South American continent. The Andes Cordillera is not only the longest but also the youngest and most ecologically varied mountain range on Earth. Above its entire distance, the world’s largest flying land bird, the Andean condor, soars on a ten-foot wingspan, effortlessly riding the thin, frigid winds three miles above sea level.

Beyond the condor, a bevy of other strange and often secretive animals lives in a bewildering variety of habitat pockets tucked between the sharp rumples of the Andes. Flightless coots and flocks of diminutive flamingoes specialize in semifrozen lakes. Curly-tailed viscachas and elegant vicuñas inhabit broad, rocky plateaus, while spectacled bears and wooly tapirs hide in misty cloud forests where thousands of spectacular birds, from hummingbirds to toucans, flash their dazzling colors. What all these species have in common is the harsh climate of the Andes, where oxygen is scarce and temperatures in some places fluctuate 50 degrees F between day and night. 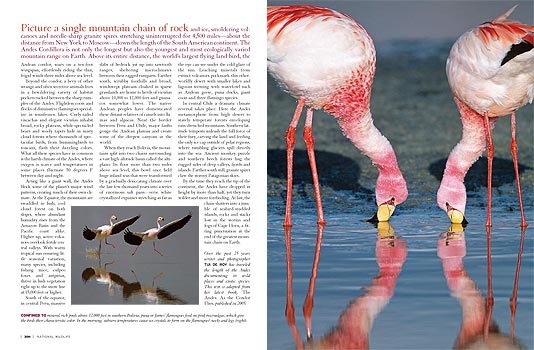 Acting like a giant wall, the Andes block some of the planet’s major wind patterns, creating much of their own climate. At the Equator, the mountains are swaddled in lush, cool cloud forest on both slopes, where abundant humidity rises from the Amazon Basin and the Pacific coast alike. Higher up, active volcanoes overlook fertile central valleys. With warm tropical sun ensuring little seasonal variation, many species, including fishing mice, culpeo foxes and antpittas, thrive in lush vegetation right up to the snow line at 15,000 feet or higher.

South of the equator, in central Peru, massive slabs of bedrock jut up into sawtooth ranges, sheltering microclimates between their ragged ramparts. Farther south, scrubby foothills and broad, windswept plateaus cloaked in sparse grasslands are home to herds of vicuñas above 10,000 to 12,000 feet and guanacos somewhat lower. The native Andean peoples have domesticated these distant relatives of camels into llamas and alpacas. Near the border between Peru and Chile, major faults gouge the Andean plateau and create some of the deepest canyons in the world.

When they reach Bolivia, the mountains split into two chains surrounding a vast high-altitude basin called the altiplano. Its floor more than two miles above sea level, this bowl once held huge inland seas that were transformed by a gradually desiccating climate over the last few thousand years into a series of enormous salt pans—eerie white crystallized expanses stretching as far as the eye can see under the cold glare of the sun. Leaching minerals from extinct volcanoes pockmark this otherworldly desert with smaller lakes and lagoons teeming with waterfowl such as Andean geese, puna ducks, giant coots and three flamingo species. 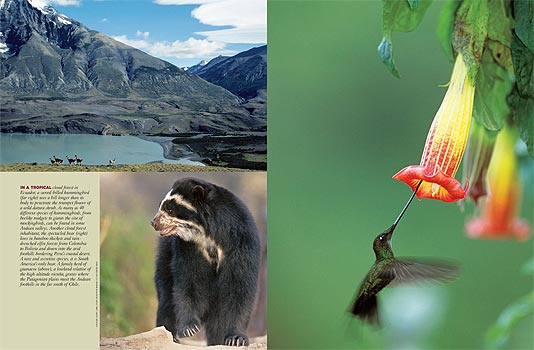 By the time they reach the tip of the continent, the Andes have dropped in height by more than half, yet they turn wilder and more foreboding. At last, the chain shatters into a jumble of seabird-studded islands, rocks and stacks lost in the storms and fogs of Cape Horn, a fitting punctuation at the end of the greatest mountain chain on Earth.

Over the past 25 years writer and photographer Tui De Roy has traveled the length of the Andes documenting its wild places and exotic species. This text is adapted from her latest book, The Andes: As the Condor Flies, published in 2005.