Kings of the Southern Ocean

Once heavily hunted for its oil, the remarkable king penguin is on the rebound today 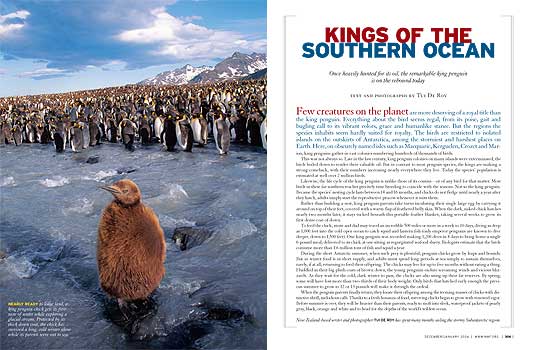 FEW CREATURES on the planet are more deserving of a royal title than the king penguin. Everything about the bird seems regal, from its poise, gait and bugling call to its vibrant colors, grace and humanlike stance. But the regions the species inhabits seem hardly suited for royalty. The birds are restricted to isolated islands on the outskirts of Antarctica, among the stormiest and harshest places on Earth. Here, on obscurely named isles such as Macquarie, Kerguelen, Crozet and Marion, king penguins gather in vast colonies numbering hundreds of thousands of birds.

This was not always so. Late in the last century, king penguin colonies on many islands were exterminated, the birds boiled down to render their valuable oil. But in contrast to most penguin species, the kings are making a strong comeback, with their numbers increasing nearly everywhere they live. Today the species’ population is estimated at well over 2 million birds.

Likewise, the life cycle of the king penguin is unlike those of its cousins—or of any bird for that matter. Most birds in these far southern reaches precisely time breeding to coincide with the seasons. Not so the king penguin. Because the species’ nesting cycle lasts between 14 and 16 months, and chicks do not fledge until nearly a year after they hatch, adults simply start the reproductive process whenever it suits them.

Rather than building a nest, king penguin parents take turns incubating their single large egg by carrying it around on top of their feet, covered with a warm flap of feathered belly skin. When the dark, naked chick hatches nearly two months later, it stays tucked beneath this portable feather blanket, taking several weeks to grow its first dense coat of down.

To feed the chick, mom and dad may travel an incredible 500 miles or more in a week to 10 days, diving as deep as 1,000 feet into the cold open ocean to catch squid and lantern fish (only emperor penguins are known to dive deeper, down to 1,500 feet). One king penguin was recorded making 1,200 dives in 4 days to bring home a single 6-pound meal, delivered to its chick at one sitting as regurgitated seafood slurry. Biologists estimate that the birds consume more than 1.6 million tons of fish and squid a year.

During the short Antarctic summer, when such prey is plentiful, penguin chicks grow by leaps and bounds. But in winter food is in short supply, and adults must spend long periods at sea simply to sustain themselves, rarely, if at all, returning to feed their offspring. The chicks may live for up to five months without eating a thing. Huddled in their big plush coats of brown down, the young penguins endure screaming winds and vicious blizzards. As they wait for the cold, dark winter to pass, the chicks are also using up their fat reserves. By spring, some will have lost more than two-thirds of their body weight. Only birds that hatched early enough the previous summer to grow to 12 or 13 pounds will make it through the ordeal. 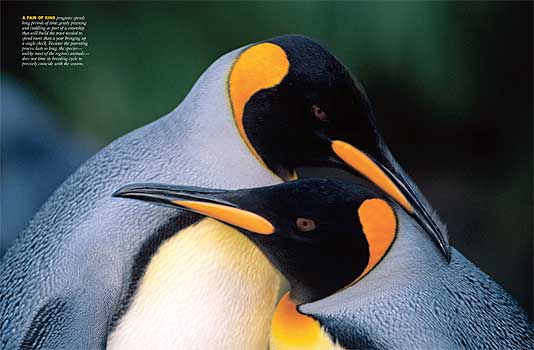 When the penguin parents finally return, they locate their offspring among the teeming masses of chicks with distinctive shrill, melodious calls. Thanks to a fresh bonanza of food, surviving chicks begin to grow with renewed vigor. Before summer is over, they will be heavier than their parents, ready to molt into sleek, waterproof jackets of pearly gray, black, orange and white and to head for the depths of the world’s wildest ocean.