Illegal immigrants, drug trafficking and theft rings are making U.S. protected lands along the border with Mexico hazardous for both wildlife and people 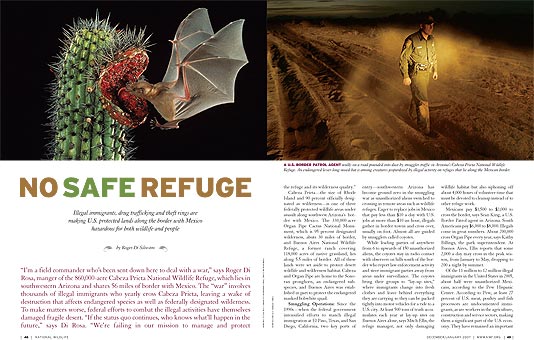 "I'm a field commander who's been sent down here to deal with a war," says Roger Di Rosa, manger of the 860,000-acre Cabeza Prieta National Wildlife Refuge, which lies in southwestern Arizona and shares 56 miles of border with Mexico. The "war" involves thousands of illegal immigrants who yearly cross Cabeza Prieta, leaving a wake of destruction that affects endangered species as well as federally designated wilderness. To make matters worse, federal efforts to combat the illegal activities have themselves damaged fragile desert. "If the status quo continues, who knows what'll happen in the future," says Di Rosa. "We're failing in our mission to manage and protect the refuge and its wilderness quality."

Cabeza Prieta--the size of Rhode Island and 90 percent officially designated as wilderness--is one of three federally protected wildlife areas under assault along southwest Arizona's border with Mexico. The 330,000-acre Organ Pipe Cactus National Monument, which is 95 percent designated wilderness, abuts 30 miles of border, and Buenos Aires National Wildlife Refuge, a former ranch covering 118,000 acres of native grassland, lies along 5.5 miles of border. All of these lands were set aside to protect desert wildlife and wilderness habitat. Cabeza and Organ Pipe are home to the Sonoran pronghorn, an endangered subspecies, and Buenos Aires was established in part to protect the endangered masked bobwhite quail.

Smuggling Operations
Since the 1990s--when the federal government intensified efforts to stanch illegal immigration at El Paso, Texas, and San Diego, California, two key ports of entry--southwestern Arizona has become ground zero in the smuggling war as unauthorized aliens switched to crossing in remote areas such as wildlife refuges. Eager to replace jobs in Mexico that pay less than $10 a day with U.S. jobs at more than $10 an hour, illegals gather in border towns and cross over, usually on foot. Almost all are guided by smugglers called coyotes. While leading parties of anywhere from 6 to upwards of 150 unauthorized aliens, the coyotes stay in radio contact with observers on hills south of the border who report law enforcement activity and steer immigrant parties away from areas under surveillance. The coyotes bring their groups to "lay-up sites," where immigrants change into fresh clothes and leave behind everything they are carrying so they can be packed tightly into motor vehicles for a ride to a U.S. city. At least 500 tons of trash accumulates each year at lay-up sites on Buenos Aires alone, says Mitch Ellis, the refuge manager, not only damaging wildlife habitat but also siphoning off about 4,000 hours of volunteer time that must be devoted to cleanup instead of to other refuge work.

Of the 11 million to 12 million illegal immigrants in the United States in 2005, about half were unauthorized Mexicans, according to the Pew Hispanic Center. According to Pew, at least 27 percent of U.S. meat, poultry and fish processors are undocumented immigrants, as are workers in the agriculture, construction and service sectors, making them a significant part of the U.S. economy. They have remained an important part of the Mexican economy, too. According to the Inter-American Development Bank, more than 60 percent of Latin Americans in the United States--both legal and otherwise--send money home. The $20 billion sent to Mexico alone each year accounts for 3 percent of the nation's gross domestic product and for 50 to 80 percent of the annual income of recipients.

Undocumented immigrants crossing into Cabeza Prieta are faced with an 85-mile trek through harsh, dry desert. At Buenos Aires they may have to walk as little as 12 miles to a pick-up site, King says. Along the way, they may be robbed by border bandits. On Cabeza Prieta, death from heat and thirst is "common," Di Rosa says. Illegals crossing southwestern Arizona also face capture and deportation by the 2,500 U.S. Border Patrol agents now working there. 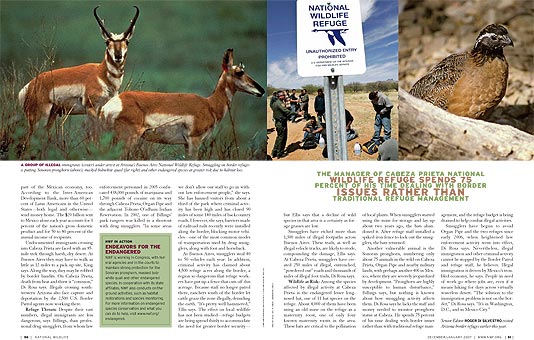 Refuge Threats
Despite their vast numbers, illegal immigrants are less dangerous, says Billings, than professional drug smugglers, from whom law enforcement personnel in 2005 confiscated 438,000 pounds of marijuana and 1,700 pounds of cocaine on its way through Cabeza Prieta, Organ Pipe and the adjacent Tohono O'odham Indian Reservation. In 2002, one of Billings' park rangers was killed in a shootout with drug smugglers. "In some areas we don't allow our staff to go in without law enforcement people," she says. She has banned visitors from about a third of the park where criminal activity has been high and has closed 90 miles of some 140 miles of backcountry roads. However, she says, barriers made of railroad rails recently were installed along the border, blocking motor vehicles--one of the most common modes of transportation used by drug smugglers, along with foot and horseback.

At Buenos Aires, smugglers steal 40 to 50 vehicles each year. In addition, criminal activity has claimed about 4,500 refuge acres along the border, a region so dangerous that refuge workers have put up a fence that cuts off this acreage. Because staff no longer patrol there, ranchers south of the border let cattle graze the zone illegally, denuding the earth. "It's pretty well hammered," Ellis says. The effect on local wildlife has not been studied--refuge budgets are being spread thinly to accommodate the need for greater border security--but Ellis says that a decline of wild species in that area is a certainty as forage grasses are lost.

Wildlife at Risk
Among the species affected by illegal activity at Cabeza Prieta is the endangered lesser long-nosed bat, one of 11 bat species on the refuge. About 4,000 of them have been using an old mine on the refuge as a maternity roost, one of only four known maternity roosts in the area. These bats are critical to the pollination of local plants. When smugglers started using the mine for storage and lay up about two years ago, the bats abandoned it. After refuge staff installed a spiked iron fence to lock out the smugglers, the bats returned.

Another vulnerable animal is the Sonoran pronghorn, numbering only about 75 animals in the wild on Cabeza Prieta, Organ Pipe and nearby military lands, with perhaps another 400 in Mexico, where they are severely jeopardized by development. "Pronghorn are highly susceptible to human disturbance," Billings says, but nothing is known about how smuggling activity affects them. Di Rosa says he lacks the staff and money needed to monitor pronghorn status at Cabeza. He spends 75 percent of his time dealing with border issues rather than with traditional refuge management, and the refuge budget is being drained to help combat illegal activities.

Smugglers have begun to avoid Organ Pipe and the two refuges since early 2006, when heightened law enforcement activity went into effect, Di Rosa says. Nevertheless, illegal immigration and other criminal activity cannot be stopped by the Border Patrol and refuge staff, he believes. Illegal immigration is driven by Mexico's troubled economy, he says. People in need of work go where jobs are, even if it means hiking for days across virtually waterless desert. "The solution to the immigration problem is not on the border," Di Rosa says. "It's in Washington, D.C., and in Mexico City."

NWF in Action: Endeavors for the Endangered

NWF is working in Congress, with federal agencies and in the courts to maintain strong protection for the Sonoran pronghorn, masked bobwhite quail and other endangered species. In cooperation with its state affiliates, NWF also conducts on-the-ground activities, such as habitat restorations and species monitoring. For more information on endangered species conservation and what you can do to help, visit www.nwf.org/endangered.