Ode to a Founding Fish

To author and fisherman John McPhee, the American shad is an alluring fighter with a place in U.S. history; today it is also an icon of efforts to restore Eastern rivers and streams 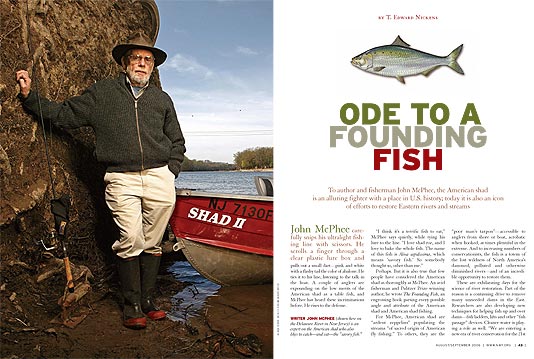 JOHN MCPHEE carefully snips his ultralight fishing line with scissors. He scrolls a finger through a clear plastic lure box and pulls out a small dart--pink and white with a flashy tail the color of abalone. He ties it to his line, listening to the talk in the boat. A couple of anglers are expounding on the low merits of the American shad as a table fish, and McPhee has heard these incriminations before. He rises to the defense.

"I think it's a terrific fish to eat," McPhee says quietly, while tying his lure to the line. "I love shad roe, and I love to bake the whole fish. The name of this fish is Alosa sapidissima, which means 'savory fish.' So somebody thought so, other than me."

Perhaps. But it is also true that few people have considered the American shad as thoroughly as McPhee. An avid fisherman and Pulitzer Prize-winning author, he wrote The Founding Fish, an engrossing book parsing every possible angle and attribute of the American shad and American shad fishing.

For McPhee, American shad are "ardent zeppelins" populating the streams "of sacred origin of American fly fishing." To others, they are the "poor man's tarpon"--accessible to anglers from shore or boat, acrobatic when hooked, at times plentiful in the extreme. And to increasing numbers of conservationists, the fish is a totem of the lost wildness of North America's dammed, polluted and otherwise diminished rivers--and of an incredible opportunity to restore them.

These are exhilarating days for the science of river restoration. Part of the reason is a continuing drive to remove many unneeded dams in the East. Researchers are also developing new techniques for helping fish up and over dams--fish ladders, lifts and other "fish passage" devices. Cleaner water is playing a role as well. "We are entering a new era of river conservation for the 21st century," says Boyd Kynard, a leading expert on migrating fish for the federal Conte Anadromous Fish Research Center. "It's a story the public needs to hear, because it is happening in so many places. In this era, we hope to open up passage for all migratory fishes in rivers blocked by the Industrial Revolution of the 19th and early 20th centuries."

In important respects, the American shad is leading the way. Native to Eastern rivers from Labrador to Florida, a spawning American shad is 12 to 24 inches of silvery-slick shimmer, its back draped with a green and blue metallic luster that gives way to sides glimmering like liquid opal. Like all anadromous fish, shad begin life in freshwater rivers. As larvae and juveniles, they move downstream to estuaries and sounds, then spend most of their lives in the open ocean. Early each spring, however, enormous numbers ascend coastal rivers, unseen in the turbid and tannin-stained flow, but heralding the coming season as surely as spring peepers. Streams void of the migrants in January swell with the arrival of hundreds of thousands of fish seeking spawning grounds that lie in upstream shoals and rapids.

That reliance on open migratory corridors through the settled East has hammered American shad populations. From the dawn of the Industrial Revolution, when untold thousands of small dams were built across Eastern rivers and smaller streams to power mills and factories, through the age of hydroelectric power, when huge dams corralled major rivers from Maine to Florida, populations of American shad and many other anadromous fish have plummeted.

"Growing up, I didn't know what a shad was," says George "Pappy" Magaro, longtime president of the Delaware River Shad Fishermen's Association (a member of NWF affiliate The Pennsylvania Federation of Sportsmen's Clubs) who has fished the confluence of the Lehigh and Delaware rivers at Easton, Pennsylvania, for 30 years. Once, these waters hosted a huge shad migration, but commercial fishing whittled stocks away, dams checked upstream movements and a massive "pollution plug" in the river between Philadelphia and Wilmington, Delaware, literally forced migrating shad to turn around and swim back to the sea. One day in the mid-1970s, Magaro caught a large fish at the base of the Lehigh River Dam. "I called the kids over to look at the size of this huge river chub," he says. "I didn't find out it was a shad until two years later when a friend asked me to go shad fishing. I said, 'What's a shad?'"

Anglers and conservationists are heartened that more and more East Coast residents are having the opportunity to learn about shad for themselves. In recent years, dam removals in eastern seaboard states and advances in fish passage techniques have opened up thousands of miles of spawning habitat closed to shad for decades. One of the first dams to fall for fish, in 1998, was Quaker Neck Dam on the Neuse River in North Carolina, which opened more than 1,000 miles of migratory fish habitat and attracted national attention. 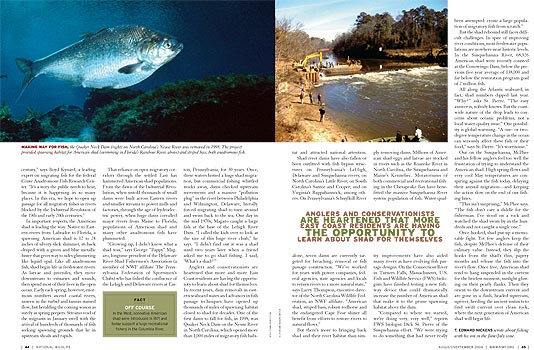 Shad river dams have also fallen or been outfitted with fish bypass structures on Pennsylvania's LeHigh, Delaware and Susquehanna rivers; on North Carolina's Little River; on South Carolina's Santee and Cooper; and on Virginia's Rappahannock, among others. On Pennsylvania's Schuylkill River alone, seven dams are currently targeted for breaching, removal or fish passage construction.

But there's more to bringing back shad and their river habitat than simply removing dams. Millions of American shad eggs and larvae are stocked in rivers such as the Roanoke River in North Carolina, the Susquehanna and Maine's Kennebec. Moratoriums of both commercial and recreational fishing in the Chesapeake Bay have benefitted the massive Susquehanna River system population of fish. Water quality improvements have also aided many rivers as have evolving fish passage designs. On the Connecticut River in Turners Falls, Massachusetts, U.S. Fish and Wildlife Service (FWS) biologists have finished testing a new fishway device that could dramatically increase the number of American shad that make it to the prime spawning habitat above the dam.

"Compared to where we started, we're doing very, very well," reports FWS biologist Dick St. Pierre of the Susquehanna effort. "We were trying to do something that had never really been attempted: create a large population of migratory fish from scratch."

But the shad rebound still faces difficult challenges. In spite of improving river conditions, most freshwater populations are nowhere near historic levels. In the Susquehanna River, 68,926 American shad were recently counted at the Conowingo Dam, below the previous five-year average of 138,000 and far below the restoration program goal of 2 million fish.

All along the Atlantic seaboard, in fact, shad numbers dipped last year. "Why?" asks St. Pierre. "The easy answer is, nobody knows. But the coastwide nature of the drop leads to concerns about oceanic problems, not a local water quality issue." One possibility is global warming. "A one- or two-degree temperature change in the ocean can seriously affect these fish or their food," says St. Pierre. "It's worrisome."

Out on the Susquehanna, McPhee and his fellow anglers feel too well the frustration of trying to understand the American shad. High spring flows and very cool May temperatures are conspiring against the fish today, delaying their annual migration--and keeping the action slow on the end of our fishing lines.

"This isn't surprising," McPhee says. "The fish don't care a diddle for the fisherman. I've stood on a rock and watched the shad swim by in the hundreds and not caught a single one."

Once hooked, shad put up a memorable fight. Yet few anglers keep the fish, despite McPhee's defense of their culinary value. Instead, they slip the hooks from the shad's thin, papery mouths and release the fish into the river's flow. Once free, American shad tend to hang suspended in the current for the briefest moment, sunlight glinting on their pearly flanks. Then they orient to the downstream current and are gone in a flash, headed upstream, upriver, heeding the ancient instincts to find swift current over clean rock, where the next generation of American shad will begin life.

T. Edward Nickens wrote about fishing with his son in the June/July issue.