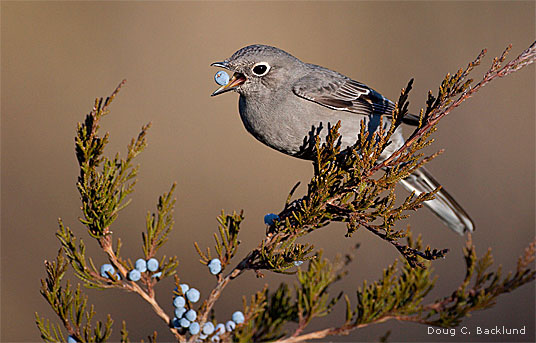 WHEN THE WIND sweeps hard out of the North in winter, piling the snow into drifts and bringing bitter weather, Ron Johnson knows what trees will be sought out by birds and other animals. "Junipers help pull wildlife through tough times," says Johnson, an extension wildlife specialist at the University of Nebraska. Not only do native junipers produce abundant food for scores of species, their dense branches also offer crucial protection from both wind and cold. When spring finally comes, mockingbirds and other songbirds often shelter their nests deep inside these conifers.

According to Johnson, many types of trees and shrubs will provide one, or perhaps two, of these benefits. But junipers are one of the few plants that do it all. "They're one of the top ten plants for wildlife," he says, pointing out that even one juniper in your yard can give birds and small mammals a boost.

Junipers can also give a boost to gardeners. Rugged and easy to care for, junipers are readily transplanted when they're young and most will grow in poor soil. Their ornamental shapes and evergreen foliage add visual interest to the garden. And their berrylike cones add splashes of brilliant blue to winter backyards when almost everything else is in a dull shade of brown, gray or white.

Those juniper berries are also the magnet that attracts birds. Everything from eastern bluebirds and evening grosbeaks to wild turkeys and sharp-tailed grouse devour the fruit. During one frigid day, a single robin or Townsend's solitaire (above) may gulp down more than 200 berries. Juniper berries aren't very tasty, says Thomas Barnes, a University of Kentucky extension professor. Wildlife tend to leave them alone during the fall, but as winter deepens, they become popular. "When nothing else is left, they're sure good," he says.

Barnes, who grows junipers in his own yard, points out there are a few downsides to junipers. For one, they should not be planted near apple or crabapple trees, because they are susceptible to cedar-apple rust, a native fungus disease. Also, juniper pollen can cause hay fever. And if you live in a fire-prone area, do not put these highly flammable conifers near your home or other buildings. Back in Nebraska, Johnson suggests moderation when planting junipers. They spread quickly through bird droppings and can take over nearby meadows or prairies. "If you have a grassland right next to you," says Johnson, "proceed cautiously."

Another point to consider: Nearly all species of junipers are dioecious, which means male plants produce only pollen and female plants produce only fruit. If there are no other junipers in your neighborhood, you must include a male in your yard or the females will not set fruit. One way to determine the gender of junipers (it's not always listed on the tags) is to buy them in the fall or winter when females are fruiting. In the milder regions of the United States, those seasons are also a good time to plant junipers.

Approximately 55 species of junipers are found worldwide, and a dozen or so are indigenous to the United States. In the nursery trade, Chinese or Japanese junipers tend to dominate. But a number of North American natives are sold in garden centers and specialized nurseries, including:

Rocky mountain juniper—This good-sized tree is found in the wild from eastern Washington, Idaho, Montana and western North Dakota south to Arizona and New Mexico. Sometimes called western red cedar, it is the most cold tolerant of the junipers. It takes two years for the berries to mature. There are many cultivated varieties (called cultivars), including Blue Arrow and Wichita Blue.

Eastern red cedar—Despite its common name, this tree is a juniper. The most widespread conifer in eastern and midwestern North America, it is native to 37 states. Dozens of species of birds feast on the berries, including cedar waxwings, which get their name from their fondness for this tree. Many selections and varieties of this species are available, including a popular female cultivar called "Canaertii."

Common juniper—Found across the northern United States and southern Canada, this shrub is also native to Europe and Asia. For backyard wildlife gardeners, this small juniper can be an excellent plant, attracting catbirds, thrashers and woodpeckers, among others. It grows best in cooler climates.

Ashe juniper—Native from Missouri to central Texas, this tree reaches 35 to 40 feet in height. The endangered golden-cheeked warbler pulls off thin strips of Ashe juniper bark to build its nest, and other species of wildlife, such as gray fox, curve-billed thrasher and bobwhite quail, eat the berries.

Doreen Cubie is a frequent contributor to this magazine. Learn more about gardening for wildlife.

During the warmer months, look closely and you will sometimes see thumbnail-sized butterflies resting on the branches of native junipers. Called juniper hairstreaks, these mint green to brownish butterflies are a widespread species found across much of the United States. They seek out juniper for their larval food plant, laying their eggs where the caterpillars can hatch and readily feed on the leaves. One subspecies, called Sweadner's juniper hairstreak, lives only in Florida. Its numbers are dwindling rapidly because of habitat loss.

“Choosing a Tree for Your Yard? Go Native”
“’Tis the Season for Birds and Berries”
Garden for Wildlife: NWF’s Certified Wildlife Habitat Program