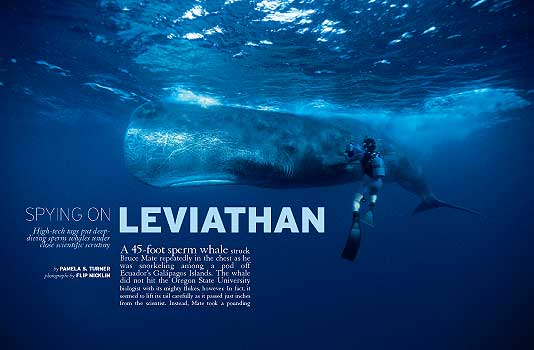 A 45-FOOT sperm whale struck Bruce Mate repeatedly in the chest as he was snorkeling among a pod off Ecuador's Galapagos Islands. The whale did not hit the Oregon State University biologist with its mighty flukes, however. In fact, it seemed to lift its tail carefully as it passed just inches from the scientist. Instead, Mate took a pounding from the sperm whale's thunderous sonar. "It was like someone beating on my chest," Mate says. "I was being brailled, interrogated and investigated. It was a profound experience."

Sperm whale life revolves around the creature's sophisticated sound system, the most powerful in the animal kingdom. The whales use distinctive patterns of clicking sounds in social communication. They also use echolocation clicks to find squid, their most important prey, in utter darkness up to 6,500 feet below the surface. Scientists speculate that these sound blasts may double as stun guns, helping sperm whales catch their slippery quarry, although no one knows for sure. Even the shape of a sperm whale's body is dictated by the creature's need for a massive, oil-filled "click generator" in its snout. In pursuit of this acoustic oil, whalers once slaughtered sperm whales by the tens of thousands.

Sperm whales rank among the most wide-ranging of all animals and spend two-thirds of their lives foraging in the abyss, making scientific observation difficult, to say the least. Identification of whales by distinctive fluke markings has been practiced a long time. In Herman Melville's 1851 novel Moby Dick, Captain Ahab tells his crew to look out for a white whale with "three holes punctured in his starboard fluke." Identification by tail provides only spotty data on whale behavior and movements, but now biologists like Bruce Mate are unlocking sperm whale secrets with a new remote tracking technology a sperm whale might envy.

A New Kind of Study
In summer 2001, Mate was in the Gulf of Mexico doing preliminary research that led to the Sperm Whale Seismic Study (SWSS), a federally funded project to study the estimated 300 sperm whales that ply the Gulf of Mexico. These animals share the brine with thousands of oil and gas rigs, and oil exploration using sound arrays is moving into deeper water near sperm whale habitat. SWSS, which concluded the tagging portion of its fieldwork last summer, was designed to document the typical behavior of the gulf's sperm whales and ultimately to try to determine if the animals alter their behavior in response to human-generated sounds.

From his inflatable boat, Mate aimed a crossbow at a sperm whale and sent a barb shooting toward the animal. Although this might evoke the bad old days, Mate's setup resembles James Bond's gadgets more than Captain Ahab's harpoons. The barb anchors a satellite tag the size and shape of a small hand-held microphone. The tag is a minicomputer that gathers location, depth and time data every few seconds. When the whale rests at the surface, the tag beams data to an orbiting satellite that in turn beams the data to Mate's computer, allowing him to spy or whales while sipping Starbucks. At least, that's the way it is supposed to work.

But back in the real world, Mate's barb bounced right off the whale. "They have a hide like a radial tire," he says ruefully.

Mate is no stranger to the frustrations of high-tech whale tracking. He successfully tracked gray and humpback whales before attempting sperms in 1995 off the Galápagos. It was an utter failure. Mate later discovered that the whales' powerful sound blasts damaged a 50-cent component of the $4,500 tag. "It was cutting-edge science," says Mate. "But sometimes the cutting edge is also where you bleed."

In the first three years of SWSS fieldwork, Mate successfully tagged 39 sperm whales. "We've tracked them for up to 20 months at a time," Mate says. "This is the first time ever we can look at year-to-year habits of an individual whale of any species. We've tagged up to 10 whales in a single pod, so we have information on social affiliations, too." 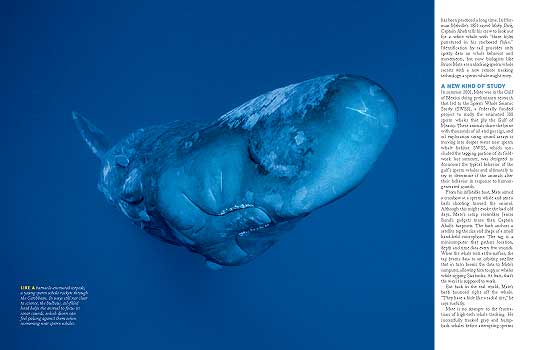 A Society of Whales
Sperm whale behavior after a 1-ton bundle of joy arrives at the end of a 15-month pregnancy suggests that it takes a pod to raise a calf: The species' social life is based on close-knit nomadic groups of 12 to 30 adult females and their young. Group members take turns baby-sitting to ensure calves are never alone while mothers are making dives that routinely last 30 to 45 minutes and can run as long as an hour. Mothers may even nurse each other's calves. Between dives much nuzzling and rubbing occurs. If threatened by orcas--their only natural predator--pod members form a defensive ring around youngsters and use their tails to fend off attackers.

Female sperm whales usually stay with their mother's group, but males leave sometime before their 15th year to join roving bands of young bulls. As males increase in size and age they tend to become more solitary and to spend more time feeding in cold waters at higher latitudes, while females and juveniles live in warmer waters. When males reach breeding age in their late twenties they go roaming in search of the ladies.

Not surprisingly, sperm whale social life involves noisemaking. Some researchers believe sperm whales can be divided into "clans" of related individuals that share distinctive click repertoires, called "codas." "There is a lot of chitter-chatter," Mate says. "They identify themselves individually with their codas: 'I am John,' 'I am Susie.' They do it much of the time." The repertoires function as dialects that distinguish different clans.

A male's sound system may affect his breeding success. Males are much longer than females--up to 65 feet compared to 39 feet--and three times heavier. Breeding males make long, ringing clicks that researchers think broadcast not only the location and identity of the bulls but also their size. Females seem to prefer larger males with more impressive clicks. Yes, sound does matter.

The SWSS study promises to provide new insights into sperm whale society. "There is nothing we've done that doesn't have something new in it," Mate says. "We take a biopsy during tagging, so we know sex, relatedness and contaminant loads. We are also starting to do micro-measurement of hormones so we can tell if a tagged female is pregnant, in estrus or nursing."

Mate hopes the same technology can help blue whales. "We don't know any calving areas for blues anywhere in the world," says Mate. "If we used these tags and had hormone measurements we could figure out where the pregnant whales go. We could give those areas special protection, and we could do it without being there."

The SWSS results also should help determine if sperm whales need protection from oil exploration. Although sperm whales are supremely designed for deep diving, some preliminary evidence suggests that whales frightened by human-made noises may surface too quickly and suffer the bends.

The worldwide sperm whale population is estimated at 360,000, down from more than a million in the pre-whaling days. Although in no immediate danger of extinction, sperm whales have the lowest reproductive rate of any mammal. Sperm whales may live 60 to 70 years. Younger females give birth every four to six years, but older females may go a decade or longer between births and, like humans, may stop reproducing entirely in their final decades. "Some people think, 'We don't hunt whales, so they are protected,'" Mate says. "But it isn't enough not to hunt them when we are doing something that affects them. We need to understand our impacts and reduce them so the whales can recover. Small changes in human behavior can make a difference."

Although the SWSS fieldwork has wound down, Mate has not lost touch with his older study subjects. First thing every morning he turns on his computer and checks in with his satellite tags. Where is Leviathan today? "Next to God and the whales," Mate says, "I am the first to know."

Revenge of the (Polluted) Whales: Killing for Conservation?
In 2000, after a 12-year hiatus, Japan sharpened its harpoons. Although the International Whaling Commission's moratorium on commercial whaling remains in effect, a loophole permits whaling for "scientific" purposes. The Japanese maintain that lethal research is necessary to obtain information for conservation and management, including data on population, age structure, growth rates, age at maturity, reproductive rates, feeding and levels of contaminants. From 2000-2004, Japanese whalers reported killing 38 sperm whales in the North Pacific for study.

The International Whaling Commission allows meat from scientific whaling to be sold to cover the costs of the expeditions. However, in a macabre case of irony, none of the sperm whale meat can be put on the Japanese market. It is too toxic to eat.

Sperm whales can live more than 60 years and are high on the food chain, so they have plenty of time and opportunity for contaminants like PCBs or mercury to accumulate in their tissues. The contamination may ultimately affect whale immune and reproductive systems--but for now it keeps them off the menu.