Both loved and despised, wild boars are thriving--and multiplying--in and around the city of Berlin 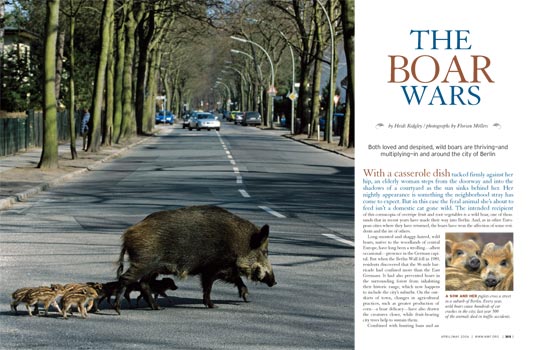 WITH A CASSEROLE DISH tucked firmly against her hip, an elderly woman steps from the doorway and into the shadows of a courtyard as the sun sinks behind her. Her nightly appearance is something the neighborhood stray has come to expect. But in this case the feral animal she's about to feed isn't a domestic cat gone wild. The intended recipient of this cornucopia of overripe fruit and root vegetables is a wild boar, one of thousands that in recent years have made their way into Berlin. And, as in other European cities where they have returned, the boars have won the affection of some residents and the ire of others.

Long-snouted and shaggy-haired, wild boars, native to the woodlands of central Europe, have long been a strolling--albeit occasional--presence in the German capital. But when the Berlin Wall fell in 1989, residents discovered that the 96-mile barricade had confined more than the East Germans. It had also prevented boars in the surrounding forest from inhabiting their historic range, which now happens to include the city's suburbs. On the outskirts of town, changes in agricultural practices, such as greater production of corn--a boar delicacy--have also drawn the creatures closer, while fruit-bearing city trees help to sustain them.

Combined with hunting bans and an absence of natural predators, these changes have unintentionally made Berlin, often described as the world's greenest capital, a boar's playground, says German photographer Florian Möllers, who for five years has used his lens to get up close and personal with Berlin's wildschwein.

"Ditches and parks provide green corridors for safe travel, and the many ponds, lakes and little streams offer everything a boar needs," says Möllers. "In recent years, they have been invading schoolyards, digging up gardens and running through gas stations." To get one award-winning photograph, he followed a single sow and her piglets on their first outing across streets, past a bus stop and through a playground before he photographed them settling down for a nap under a tree next to a car parked at the curb.

One incident he didn't catch was one of the species' most infamous: In 2003, five boars broke through a fence at a professional soccer team's training field and tore up the grounds. Two days later, after the fence had been repaired, the boars figured out a way back onto the green and ripped it up all over again. "Another time, a boar managed to get into a subway station--no one knew if it had taken the train or not," Möllers says. "And another got stuck in a telephone booth. Once in, though, it couldn't figure out how to open the door from the inside and get back out."

Today some 7,000 to 8,000 boars live in Berlin year-round, compared to an estimated 3,000 full-time city swine in 1989. An additional 3,000 to 4,000 of the animals move in during spring to search for food and places to bear their young--up to 12 per litter, which has prompted some scientists to start experimenting with boar contraception. They hope a "pig pill," delivered through pellets left in food troughs in the forest, will help curb the species' exploding populations.

Berlin isn't the only European city bothered by boars. In one Polish city, aptly called Swinoujscie ("where the River Swina runs"), it's not unheard of to see a herd of boars roaming Baltic beaches and scavenging fast-food stands. In Constanta, along the Black Sea in Romania, a boar crashed through a hotel window several years ago after nearby development flushed it from its natural habitat. But while boars may cross city borders in these countries, they do not stay long and rarely give birth in urban areas. "Berlin is absolutely unique in that respect," says Möllers. 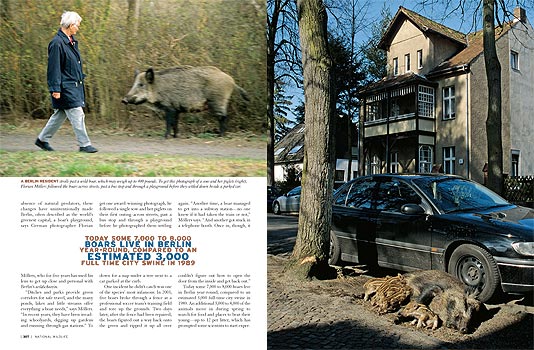 Although the actual city center remains untouched by the boars--traffic congestion keeps them at bay--the suburbs, with their backyards, thriving vegetable gardens and children's sandboxes, are perfect places to raise piglets. And like suburban parents who try to safeguard their kids by carting them around in SUVs, these massive moms are extremely protective of their offspring: A boar may not weigh as much as a two-ton truck, says Möllers, but if a 200-pound sow slams into someone, it's likely to do some damage.

Despite the obvious dangers--including the fact that wild boars cause hundreds of traffic accidents in Berlin every year--German law protects the animals in cities, and officials cannot kill one unless it's actively threatening a person's life or property. That said, sharpshooters with special permits from the forestry department kill some 2,000 every year in greater Berlin. It's a controversial policy that's pitting those frightened by the boars against those who want to protect them.

"There's definitely a powerful pro-boar movement going on," says Möllers. "It's not uncommon for foresters charged with culling the creatures to be beaten back by elderly women wielding umbrellas or sticks--even when the foresters brandish rifles." Still, while some swine shooters are called murderers, he says other forestry officials are criticized for not doing enough to stop the boars from digging up gardens or chasing children from playgrounds at recess.

To date, Berlin's boars, which can weigh up to 400 pounds and travel in family groups called sounders, have not killed anyone in this city of 3.4 million people, although dogs have been injured or killed after threatening piglets. Two years ago, a wild boar that broke through a patio door searching for food did bite the person shooing it out from underneath a table before it fled back into the woods.

Möllers--who traces his interest in boars back to an encounter with piglets outside Hamburg when he was five years old--says he's only felt threatened twice. "Mostly, angry sows rush at me in a fake attack, but you get used to that and learn to read their behavior and react appropriately," he says. But once, while exploring an abandoned building where he hoped to find boars, Möllers "virtually stepped on one" that had piglets. "I really surprised her," he says. "And there was not much room for the two of us to vanish into."

The other time he was lying on his stomach in front of a group of boars taking photos when a large male appeared to his right and started to charge. "I got up to make myself bigger, but he charged again and rammed me with his head," says Möllers. "After that, the boar just stood there looking unimpressed. It didn't seem to know how to react properly to my presence, so it showed an in-between behavior. Lucky for me I just suffered a nice bruise." He adds that most people, as long as they keep their distance and treat the boars with respect, will be all right.

So far, that strategy seems to be working for those who toss the animals scraps. A hefty fine for illegally feeding swine appears to be the only safety concern Berlin's boar-lovers have on their minds.

Heidi Ridgley is a Washington, D.C.-based writer specializing in nature and conservation.

Swine Song: Music to Their Ears?
Absent for more than 300 years, wild boars in Britain were considered extinct in the wild--until one showed up on the English estate of Paul McCartney after a storm, or so the story goes.

If true, this might be a good time for a scientific study on the musical taste of swine. While boars appear to like Sir Paul, in Serbia farmers have cranked up the volume on songs by the rock artist Meat Loaf to keep them out of their fields. Back in Germany, along the Luxembourg border, one farmer reportedly was successful after blasting Britney Spears.

Whether McCartney actually sang to the "little piggies" is unknown.