The Case of the Disappearing Warbler

To solve the mystery of migratory songbird declines, more biologists are turning their attention to habitat loss in the Tropics, where the birds spend their winters 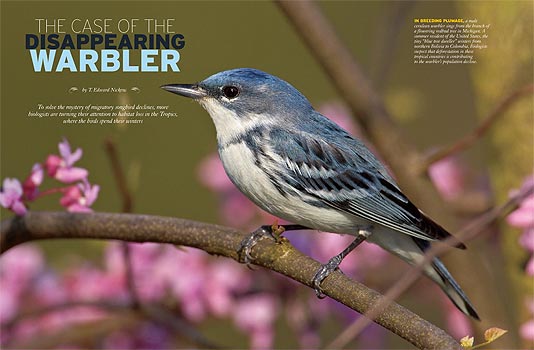 On a small coffee plantation in the Venezuelan Andes, Inga trees soar over a dense mid-canopy of broad-leafed evergreens, spiky bromeliads and jumbled vines. Closer to the ground, the red fruits of shade-grown coffee hang like cherries, ready for harvest. All is quiet except for cattle lowing in an adjacent pasture and the footfalls of campesinos making their way through the cafetal.

Suddenly, the forest canopy comes alive. Toucans, streak-headed woodcreepers, crimson-backed tanagers and other colorful tropical birds flash through the trees. They’re joined by a mixed flock of species that would be more familiar to North American birders: American redstarts and a host of other warblers, including bay-breasted, Tennessee, Blackburnian and black-and-white. One tiny bird, a short-tailed smudge of greenish yellow slashed with two white wing bars, stalks a spider on the outermost twigs of a mid-story branch. Next, it picks up a beetle from dead leaves caught in the basket of a bromeliad.

Zigzagging up the tree, draped in its drab winter plumage, the cerulean warbler is difficult to spot. Across its range, however, from the wooded ridges of Ohio to here on the slopes of the northern Andes, Dendroica cerulea, the “blue tree dweller,” is finding itself under increasing observation. Populations of the bird have declined about 3 percent a year, “faster than any other migratory warbler in eastern North America,” reports Jason Jones, a biologist at Vassar College and author of two of the first scientific papers ever published on the cerulean warbler on its wintering grounds.

The warbler is among a suite of birds known as Neotropical migrants, species that breed in Canada or the United States yet spend much, if not most, of their lives in Mexico, Central or South America or the Caribbean. About half the continent’s birds fall into this group, including 52 species of warblers, backyard birds like scarlet tanagers, ruby-throated hummingbirds and rose-breasted grosbeaks, even raptors such as broad-winged hawks and Mississippi kites. And while the cerulean warbler’s status may be particularly precarious, it is just one of many migrants whose numbers have been falling for many years. Increasingly, biologists investigating the causes of these declines are focusing on habitat loss in the Tropics, where the birds spend the winter.

According to a 2000 report published by Defenders of Wildlife, even more migratory songbird species may be declining than scientists previously realized. By analyzing data from 47 Breeding Bird Census sites collected between 1937 and 1995, biologists David King of the U.S. Forest Service Northeastern Research Station and John Rappole of the Smithsonian Institution found that 60 percent of the ten most frequently encountered mature-forest, long-distant migrants had decreased over that period—among them eastern wood-pewee, hooded warbler and wood thrush—with no migrants posting population increases and only 40 percent showing stable numbers. Previous estimates, from U.S. Breeding Bird Survey data, were based almost entirely on annual counts of birds singing by roadsides conducted only since 1965.

In their report, King and Rappole single out winter habitat loss as one likely culprit. “By the middle of the twentieth century,” explains King, “tropical deforestation was already very advanced. It’s possible that a lot of the bird population declines had already happened by the time the Breeding Bird Survey was initiated.”

King and Rappole use a strong term to describe the extent of winter habitat loss over the last half century: “staggering.” In the Amazon, for example, more than 20 percent of the region’s forest cover has been destroyed, with current clearing at more than 6,560 square miles per year.

According to the United Nations’ Food and Agriculture Organization, natural forests in Venezuela are being cut at the rate of 540,000 acres per year, an area the size of Great Smoky Mountains National Park. Ecuador, meanwhile, lost more than one out of every ten acres of natural forest between 1990 and 2000, a period during which natural forest cover across South America tumbled by 5 percent.

A complex calculus of market forces and social dynamics is driving tropical deforestation. At the core, many experts say, is the region’s crushing human population increase. According to research by NWF’s Population and Environment Program, no Central American country is expected to grow in population by less than 45 percent between 2003 and 2050. In South America, the total human population between 2002 and 2025 is expected to grow by 100 million. Forest clearing also “is being driven by land tenure issues and poverty,” says King. “These regions have enormous numbers of people who are still very tied to an agrarian economy and very actively cultivating the land.”

Whatever the reasons, deforestation in Latin America may be having a profound effect on the birds that ultimately show up in North American forests, fields and backyards. As evidence, Rappole points to his own analysis of forest cover and habitat requirements for the endangered golden-cheeked warbler. He found that 220,000 pairs of warblers could make a living in available North American breeding habitat, but that there is only enough Latin American highland pine-oak forest in the species’ winter range to support 34,000 pairs.

In Colombia, a stronghold of wintering cerulean warblers, the American Bird Conservancy estimates that 64 percent of the species’ habitat has vanished. Scientists have discovered that while the warblers winter across a huge swath of South America, they are highly selective, settling almost exclusively at mid-elevations that are not on the main slopes of the Andes but in slightly drier montane valleys in the rain shadow of primary ridges. Such regions also are well suited for human activities such as farming and grazing.

Winter habitat is critical to migrants for a number of reasons. When birds first show up in these habitats, they are famished after arduous migratory flights and need to refuel quickly. Quality winter range also puts birds at peak condition for the return flight to their breeding grounds, where they will soon be called to the tiring task of raising chicks. 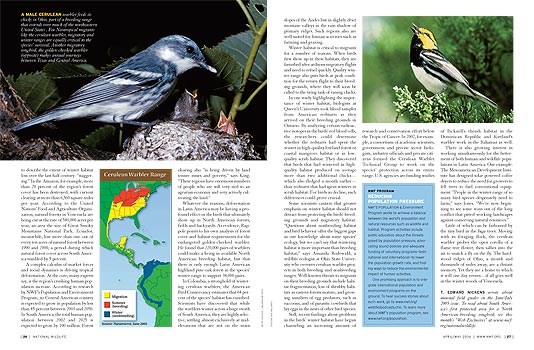 In one study highlighting the importance of winter habitat, biologists at Queen’s University took blood samples from American redstarts as they arrived on their breeding grounds in Ontario. By analyzing certain radioactive isotopes in the birds’ red blood cells, the researchers could determine whether the redstarts had spent the winter in high-quality lowland forest or coastal mangrove habitat or in low-quality scrub habitat. They discovered that birds that had wintered in high-quality habitat produced on average more than two additional chicks—which also fledged a month earlier—than redstarts that had spent winters in scrub habitat. For birds in decline, such differences could prove crucial.

Some scientists caution that greater emphasis on winter habitat should not detract from protecting the birds’ breeding grounds and migratory habitat. “Questions about nonbreeding habitat and bird behavior offer the biggest gaps in our knowledge about some species’ ecology, but we can’t say that wintering habitat is more important than breeding habitat,” says Amanda Rodewald, a wildlife ecologist at Ohio State University who oversees cerulean warbler projects in both breeding and nonbreeding ranges. Well-known threats to migrants on their breeding grounds include habitat fragmentation, loss of shrubby habitats as eastern forests mature, and growing numbers of egg predators, such as raccoons, and of parasitic cowbirds that lay eggs in the nests of other bird species.

Still, recent findings about problems in the birds’ winter habitat have begun channeling an increasing amount of research and conservation effort below the Tropic of Cancer. In 2002, for example, a consortium of academic scientists, government and private sector biologists, industry officials and private citizens formed the Cerulean Warbler Technical Group to work on the species’ protection across its entire range. U.S. agencies are funding studies of Bicknell’s thrush habitat in the Dominican Republic and Kirtland’s warbler work in the Bahamas as well.

There is also growing interest in working simultaneously for the betterment of both human and wildlife populations in Latin America. One example: The Mesoamerican Development Institute has designed solar-powered coffee dryers to reduce the need for growers to fell trees to fuel conventional equipment. “People in the winter range of so many bird species desperately need to farm,” says Jones. “We’re now beginning to see some ways out of the long conflict that pitted working landscapes against conserving natural resources.”

Little of which can be fathomed by the tiny bird in the Inga trees. Moving with its foraging flock, the cerulean warbler probes the open corolla of a flame tree flower, then sallies into the air to snatch a fly on the fly. The hardwood ridges of Ohio, a month and thousands of miles away, are a distant memory. Yet they are a home to which it will one day return—if all goes well in the winter woods of Venezuela.

NWF Program: Reducing Population Pressure
NWF’s Population & Environment Program works to achieve a balance between the world’s population and natural resources such as wildlife and habitat. Program activities include public education about the threats posed by population pressure, advocating sound policies and adequate funding of voluntary programs—both national and international—to lower the population growth rate, and finding ways to reduce the environmental impact of human activities.

One promising approach is to integrate international population and environment programs on the ground. To hear success stories about such work, go to www.nwf.org/wildlife/podcasts.cfm. To learn more about NWF’s population program, see www.nwf.org/population.