The Fossa and the Lemur 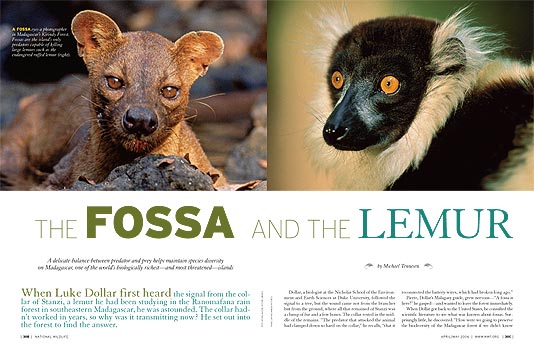 WHEN LUKE DOLLAR first heard the signal from the collar of Stanzi, a lemur he had been studying in the Ranomafana rain forest in southeastern Madagascar, he was astounded. The collar hadn't worked in years, so why was it transmitting now? He set out into the forest to find the answer.

Dollar, a biologist at the Nicholas School of the Environment and Earth Sciences at Duke University, followed the signal to a tree, but the sound came not from the branches but from the ground, where all that remained of Stanzi was a clump of fur and a few bones. The collar rested in the middle of the remains. "The predator that attacked the animal had clamped down so hard on the collar," he recalls, "that it reconnected the battery wires, which had broken long ago."

When Dollar got back to the United States, he consulted the scientific literature to see what was known about fossas. Surprisingly little, he discovered. "How were we going to preserve the biodiversity of the Madagascar forest if we didn't know what was at the top of the food chain?" he wondered. When he returned to Madagascar two years later, in 1996, he launched the first-ever rain-forest study of fossas.

The fourth largest island on Earth, Madagascar is one of the world's top conservation priorities. Slash-and-burn agriculture has destroyed more than 90 percent of its tropical forest, and the majority of that destruction has occurred in the past 60 years. Conservation International categorizes the island's remaining forests as "biodiversity hotspots:" at-risk areas with high concentrations of plant and animal species. 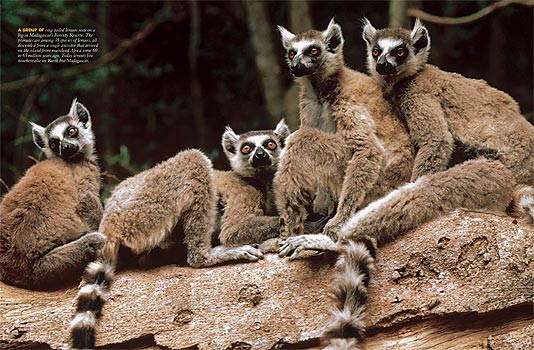 Although the island and mainland Africa are just 250 miles apart, Mozambique Channel, which separates the two, has never been shallow enough to allow easy access. Scientists believe that most of Madagascar's 100 native terrestrial mammal species descended from four distinct species that came across the channel on forest debris on vastly separate occasions. Today between 85 and 95 percent of the country's species are endemic--found nowhere else in the world but Madagascar.

Take the country's primates--some 35 species of lemurs, all descendents of a single ancestor that arrived from the mainland some 60 to 65 million years ago and are found today only on the island. And though Madagascar is home to other predators, only the fossa is capable of preying on larger lemurs.

If you see a fossa, says Dollar, your first thought is that it is a cat. The predator looks like a short, lanky mountain lion with a really long tail. "But it is actually a very large mongoose, with some catlike characteristics," he says. "It has a great nose, good eyes and fantastic ears. It can climb trees and run through the branches as well as a squirrel, yet it is 5 or 6 feet long. And although the animal weighs less than 30 pounds, it is king of the jungle."

The fossa evolved from the same ancestor as the modern mongoose, which came to the island about 21 million years ago. When humans first colonized the island, they encountered, among other huge mammalian inhabitants, a 200-pound fossa, Cryptoprocta spelia, that would have had the strength of a lion. And unlike North America's megafauna, which disappeared 12,000 years ago, this giant fossa and other Malagasy megafauna are thought to have died out only about 500 years ago. "It may be why the natives are so afraid of the fossa," says Dollar. "Only 25 generations ago, this animal may have been a much bigger beast." 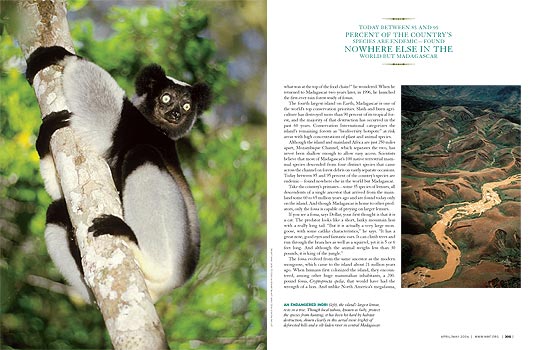 Also included among Malagasy megafauna were lemurs as large as modern-day gorillas. Their descendants, weighing anywhere from 2 ounces to 25 pounds, are particularly suited to the island's tropical forests and have evolved into a number of unusual niches. The aye-aye, for example, uses an exaggerated middle finger to tap on the bark of a tree, looking for dead spaces where grubs hang out. "They'll open the bark with their bottom jaw and then use their finger to bring out the grubs," says biologist Bill Hylander, former director of the Duke University Primate Center. "In most other areas of the world, that same job is taken up by woodpeckers."

Though a small but important part of their diet consists of grubs, lemurs are principally vegetarians. And because many plants are poisonous to the primates, they have evolved a unique ability to figure out which ones are safe. In one study, Duke biologist Ken Glander found that if you present ten leaves to a lemur, it will only eat the five that are nonpoisonous. Much of the decision-making is done by smell. Lemurs have a special sensory organ, known as the vomernasal organ, on the roof of the mouth. With a direct connection to the brain, it helps the animals determine what's toxic and what's not.

But the jungle is tricky. Plants can change their chemical makeup if they are fed upon too heavily. According to Glander, if you completely strip the leaves off a tropical tree, the ones that grow back may contain poison. So lemurs are cautious, sending out a "tester" to find food. When that lemur encounters a new plant, it will eat a little and then return to the troop. The next day it will eat a little more. Only on the third day will the lemur fill its stomach. If the tester still has not gotten ill, says Glander, "the rest of the animals may feed on the plant. Only healthy adults, never juveniles or pregnant females, are allowed to be testers."

Lemurs are less adept at escaping fossas. To avoid the predators, lemurs sleep in groups or in the hollows of trees. Often they will attach themselves to delicate end branches, a strategy that provides warning, through vibrations, if a predator approaches. 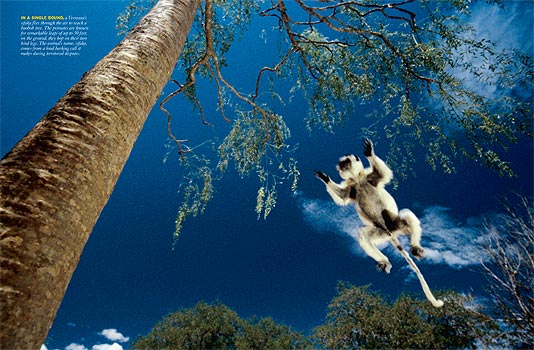 Still, the face of a fossa is often the last thing a lemur sees. The predators try to sneak up on lemurs or ambush them. Fossas prefer to attack straight ahead, using their powerful jaws and sharp claws to quickly dispatch their prey.

To learn more about the predator, Dollar works with a team of volunteers sponsored by Earthwatch Institute in Ankarafantsika National Park, a tropical dry forest in the northwest corner of Madagascar. He and his assistants collect fossa scats to determine the animal's diet and use photo traps to study both predator and prey. In addition, they trap and attach radio collars to fossas, which are then followed with hand-held tracking devices and a system of towers Dollar has built in the park.

Much of what he has found is new to science. Because the fossa was seldom seen, for example, many biologists thought it was nocturnal. But Dollar discovered that the fossa is cathemeral, hunting and napping around the clock on no set schedule. And fossas do not eat lemurs exclusively, but hunt basically "anything with a heartbeat," he says. Nevertheless, fossa predation is critical because it prevents some members of the island's primate family from outcompeting others. This helps maintain both mammal and plant diversity, since lemurs are important dispersers of plant seeds.

But Dollar's most important discovery is that fossas need space to survive--and space is running out on the island. In an area about the size of California, Madagascar has a population of more than 18 million people. Most of them are rural farmers who grow rice through slash-and-burn agriculture.

The result is that the island's tropical forests have been transformed into rice farms, savanna grasslands or bare dirt. "The vast majority of the country is a wasteland," says Dollar. "But then you get to the forests and you find these rich, rich areas with tons of endemic species, beautiful flora, incredible fauna, unsurpassed biodiversity, and it really brings to heart how much has been lost so fast."

Dollar and his colleagues say that stemming this tide of land loss requires educating farmers about better agricultural and forestry practices that do not require cutting down forest that remains. Income from foreign tourists may also help. To promote ecotourism, Dollar works with a village in the park, Ambodimanga, which started putting on folklore dances for Earthwatch volunteers in 1999 and has invested its profits in tourist cabins and a restaurant. Since 2000, the restaurant has served more than 45,000 meals, raising more than $65,000.

In a country where the average annual income is $250, such revenue has enormous potential. "When they can earn way more walking a group of tourists through the forest than they can by cutting it down," says Dollar, "they become far more interested in protecting what's there than in exploiting it."

California writer Michael Tennesen is a media fellow at Duke University's Nicholas School of the Environment and Earth Sciences.