South America's capybara faces many threats, but cattle growers may help keep it from vanishing 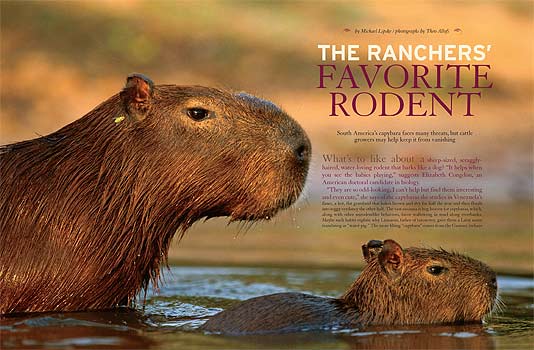 WHAT'S TO LIKE about a sheep-sized, scraggly-haired, water-loving rodent that barks like a dog? "It helps when you see the babies playing," suggests Elizabeth Congdon, an American doctoral candidate in biology.

"They are so odd-looking, I can't help but find them interesting and even cute," she says of the capybaras she studies in Venezuela's llanos, a hot, flat grassland that bakes brown and dry for half the year and then floods into soggy verdancy the other half. The vast savanna is hog heaven for capybaras, which, along with other unrodentlike behaviors, favor wallowing in mud along riverbanks. Maybe such habits explain why Linnaeus, father of taxonomy, gave them a Latin name translating as "water pig." The more lilting "capybara" comes from the Guarani Indians of South America and means "master of the grasses."

Related to guinea pigs and porcupines, capybaras can be found grazing on the grass in low country from Panama to Argentina. They are the world's largest rodents, with some adults reaching weights of 140 pounds or more, about 700 times the weight of a more typical rodent, such as a chipmunk. Even so, capybaras are not the biggest rodent ever. That would be Phoberomys, which also hailed from Venezuela (although 8 million years ago) and weighed roughly 1,500 pounds.

Whether capybaras go the way of the extinct Phoberomys depends in part on the work of researchers like Congdon of the University of Missouri–St. Louis. Capybaras are not classified as endangered, but in some places they have been severely overhunted for meat and hides. Venezuelan conservationists have long maintained that the best way to protect capybara populations is to encourage cattle ranchers, who for years routinely killed the grazing rodents as vermin, to hunt the animals in a way that sustains both capybaras and their habitat.

"Paradoxically," says Emilio Herrera, a behavioral ecologist at the Universidad Simon Bolivar, in Caracas, who has studied capybaras for 22 years, "healthy populations of capybaras tend to be in ranches where they are exploited." The rodents do better on the ranches, says Herrera, because ranch owners have an incentive to protect "their" capybaras from poachers. And capybaras can be attractive livestock. They reproduce readily and grow quickly on native llano grasses, without the added expense for hay and feed that cattle require.

Venezuela is the only country conducting large-scale, regulated hunting of capybaras. Around 7,000 to 8,000 animals are killed legally by ranchers every year, according to Herrera. 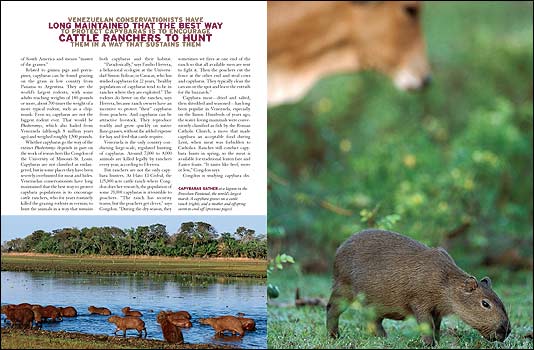 But ranchers are not the only capybara hunters. At Hato El Cedral, the 125,000-acre cattle ranch where Congdon does her research, the population of some 20,000 capybaras is irresistible to poachers. "The ranch has security teams, but the poachers get clever," says Congdon. "During the dry season, they sometimes set fires at one end of the ranch so that all available men are sent to fight it. Then the poachers cut the fence at the other end and steal cows and capybaras. They typically clean the carcass on the spot and leave the entrails for the buzzards."

Capybara meat--dried and salted, then shredded and seasoned--has long been popular in Venezuela, especially on the llanos. Hundreds of years ago, the water-loving mammals were conveniently classified as fish by the Roman Catholic Church, a move that made capybara an acceptable food during Lent, when meat was forbidden to Catholics. Ranches still conduct capybara hunts in spring, so the meat is available for traditional lenten fare and Easter feasts. "It tastes like beef, more or less," Congdon says. 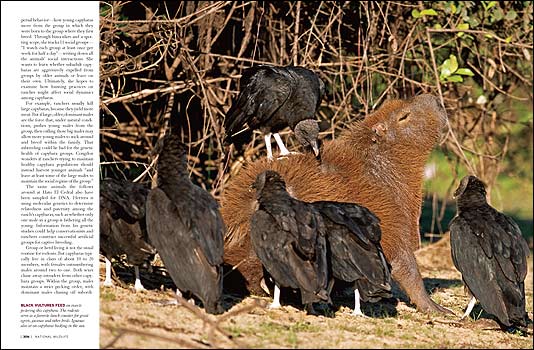 Congdon is studying capybara dispersal behavior--how young capybaras move from the group in which they were born to the group where they first breed. Through binoculars and a spotting scope, she tracks 11 social groups--"I watch each group at least once per week for half a day"--writing down all the animals' social interactions. She wants to learn whether subadult capybaras are aggressively expelled from groups by older animals or leave on their own. Ultimately, she hopes to examine how hunting practices on ranches might affect social dynamics among capybaras.

For example, ranchers usually kill large capybaras, because they yield more meat. But if large, older, dominant males are the force that, under natural conditions, pushes young males from the group, then culling those big males may allow more young males to stick around and breed within the family. That inbreeding could be bad for the genetic health of capybara groups. Congdon wonders if ranchers trying to maintain healthy capybara populations should instead harvest younger animals "and leave at least some of the large males to maintain the social regime of the group."

The same animals she follows around at Hato El Cedral also have been sampled for DNA. Herrera is using molecular genetics to determine relatedness and paternity among the ranch's capybaras, such as whether only one male in a group is fathering all the young. Information from his genetic studies could help conservationists and ranchers construct successful artificial groups for captive breeding.

Group or herd living is not the usual routine for rodents. But capybaras typically live in clans of about 10 to 20 members, with females outnumbering males around two to one. Both sexes chase away intruders from other capybara groups. Within the group, males maintain a strict pecking order, with dominant males chasing off subordinates. However, males that are shooed away still maintain membership in the group. In fact, they are valuable citizens. Elbowed to the edge of their little community, subordinate males are usually the first to detect approaching predators and raise an alarm--a loud doglike bark.

If group living is a given for capybaras, nearness to water is another. The supersized rodents have partly webbed toes and are good swimmers. Lacking sweat glands, they control their body temperature by wallowing in water during the hottest part of the day. They even mate in the water.

Water is also a refuge. Capybaras that dive into the water have a good chance of escaping death at the jaws of a jaguar or puma. Constructed with nose and eyes atop a broad head, a capybara can submerge with scarcely any of its body visible above the waterline. Alas, other enemies are even more at home in water than the capybara. Anacondas--the enormous South American boa constrictors--have no problem killing even large capybaras. And caimans routinely target young ones. However, Congdon has seen adult capybaras sleeping next to the crocodilians, and once watched an adult "charge and chase off a moderate-size caiman."

Not every animal in the neighborhood wants to chew on the big rodents. Great egrets, yellow-headed caracaras, jacanas and other birds use capybaras as lunch counters, perching on their backs to pick at insects. Congdon has even seen iguanas and turtles basking atop capybaras at Hato El Cedral.

The llanos' two-legged mammals are the capybaras' biggest problem--and perhaps their only hope. "In Venezuela, the only healthy populations are those in protected ranches like this one or reserves," Congdon says. "Outside these protected areas, they are almost wiped out."

On one side, the rodents are flanked by poachers, many of them poor and hungry, who conduct their hunts without consulting ecologists or obeying government quotas. Pressing capybaras from the other side are their paradoxical protectors, the ranchers. They want to kill capybaras, too, but sustainably, which means protecting the animals from poachers. In the middle are the improbable rodents, the future of which hangs on their profitability.

Michael Lipske, a former editor for this magazine, lives in Washington, D.C.