The Secret to Saving Sea Turtles 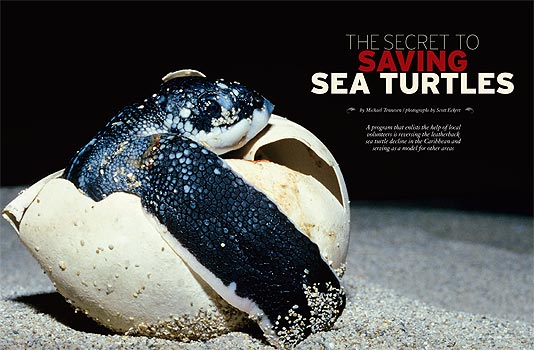 THE TROPICAL NIGHT rumbles with the crash of waves on Trinidad's Matura Beach, where a group of biologists huddles under a quarter moon waiting for the evening's main attraction to emerge from the sea. Soon, out of the white froth a large, dark silhouette takes shape. Scott Eckert, a biologist with the Nicholas School of the Environment and Earth Sciences at Duke University, points it out to the volunteers gathered around him. Their eyes widen as they see the great, lumbering form of the most ancient living sea turtle species, the leatherback, a bizarre creature older than the dinosaurs and no less exotic. Tonight's visitor weighs about 800 pounds.

Matura Beach is one of the world's largest leatherback nesting colonies, with more than 2,000 of the massive reptiles laying eggs here annually and up to 150 arriving nightly during the spring/summer nesting season.

This living fossil picks a spot on the beach and starts to dig a nest. Soon the animal is laying cue-ball-size eggs, generally 70 to 90 in all. While laying, the turtle goes into a preoccupied trance, and Eckert uses this opportunity to tag the creature and measure and record its vital statistics.

Eckert and his wife, Karen, have been studying leatherback sea turtles since 1982. At Matura Beach, they are assisted by Nature Seekers, a local conservation organization founded in 1990 to help preserve the wildlife of Trinidad's eastern shore. Consisting mostly of residents from the village of Matura, participants guard the beaches from the poachers and thrill-seekers that once killed nesting turtles in large numbers. To support the protection work, Nature Seekers members work as ecotourism guides and environmental educators.

As a member of the Wider Caribbean Sea Turtle Conservation Network (WIDECAST), Nature Seekers has become a model for sea turtle conservation work, and its methods have been used with success elsewhere in the region. "The Caribbean Sea is the only place on Earth where some populations of all indigenous sea turtle species are now increasing," says Karen Eckert, WIDECAST's executive director. "Through WIDECAST, localized successes such as at Matura reach an international audience. The work in Trinidad and Tobago has benefited tremendously from this networking and, in turn, has nourished newer conservation efforts with experience and hope."

But such success is not prevalent everywhere. The United States and the World Conservation Union classify the leatherback as endangered and critically endangered, respectively. In the Pacific, leatherback populations have plummeted, and some nesting beaches are practically deserted. "If things continue like this in the future, we are looking at extinction of the Pacific leatherback in the next 10 years," Scott Eckert says.

The leatherback is the largest of all turtles. An adult male may exceed 9 feet in length and weigh more than a ton. Unlike other sea turtles, the leatherback lacks a hard shell--its carapace is made from thick cartilaginous tissue. Seven narrow ridges run the entire length of the back, serving as a keel to improve the flow of water and increase swimming speed.

The Eckerts began looking at this species of giants off St. Croix, in the U.S. Virgin Islands, in the early 1980s. In their initial research, they teamed up with Gerald Kooyman at Scripps Institution of Oceanography for a pioneering study of leatherback diving behavior. They tracked one turtle to an estimated depth of 4,260 feet, earning the animal a brief stint in the Guinness Book of World Records for a breath-hold dive. The leatherback ranks among the world's deepest air-breathing divers, along with the elephant seal, which can go to nearly 4,000 feet, and the sperm whale, which can plunge more than 7,000 feet deep.

A diving leatherback must go through a gauntlet of lethal obstacles. Number one is pressure, which at 4,260 feet is around 1,900 pounds per square inch. Under such conditions, air trapped in the body, including the lungs, can rupture surrounding tissue. Leatherbacks avoid this threat by leaving their air behind, collapsing the lungs at about 115 feet. While underwater, they get oxygen from stores in the blood and muscle rather than from the lungs. By purging themselves of air they also rid themselves of nitrogen, the primary cause of decompression sickness, or the bends.

Leatherbacks prey on jellyfish. "It's the perfect Atkins Diet, almost all protein," Eckert says. In tropical waters, they find the majority of that food around the "deep scattering layer," so called because early sonar used to bounce off of it, giving the impression of a false bottom. This thick zone of jellyfish and zooplankton offers an all-you-can-eat buffet for any creature that can get that far down. Lying about 1,800 feet deep during the day and closer to the surface at night, the scattering layer is beyond the reach of sharks and killer whales, the leatherback's only natural predators. 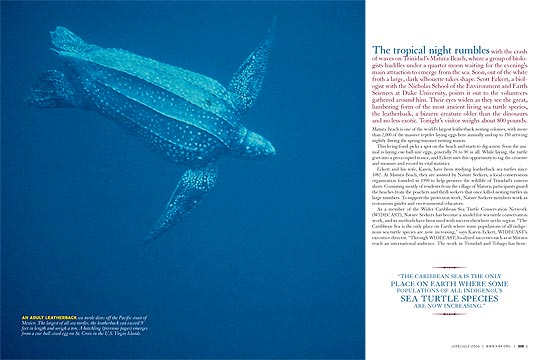 Leatherbacks go not only deep but long. Using satellite-tracking instruments attached to the turtles, Eckert has followed leatherbacks that traveled from Trinidad to the mid North Atlantic before heading down to the northwest corner of Africa. He and his collaborators also have documented migrations between remote nesting beaches in Indonesia and the rich feeding grounds of Monterey Bay, California. Leatherbacks possess the right gear for such far-flung travel. "They have a teardrop shaped body--the perfect hydrodynamic form--and long powerful fins," Eckert says. "It takes only a little bit more energy for them to swim than it takes to sit still. But they don't sit still. They almost never stop moving."

The turtles' ability to wander has gotten them into trouble in the Pacific. Biologists were alarmed in the late 1980s and early 1990s when leatherbacks nesting on the western shores of Mexico and Costa Rica started disappearing. Supporting an estimated 70,000 nesters in the early 1980s, Pacific Mexico is thought to have been home to half of all breeding-age leatherbacks on Earth. Today, fewer than 1,000 nesters per year visit the Mexican shoreline. "Their slide toward extinction during the 1990s has been the most rapid decline for any large vertebrate population in history," Eckert says.

In the 1990s, Eckert and Mexican colleague Laura Sarti suspected that the loss of turtles to North Pacific high-seas drift nets was driving the decline, but when they attached satellite-tracking devices to the animals, they found that leatherbacks nesting on Mexican shores were heading not north but south, to the coasts of Chile and Peru. There, off Chile alone, coastal gill net fishing for swordfish had expanded from 500 days of annual effort at sea in 1983 to 40,000 days of annual effort at sea by 1993, a burgeoning threat to the turtles. But there is hope. More recently, long lines, which use baited hooks to catch fish, have replaced gill nets in these waters, an improvement because long lines kill far fewer turtles than do gillnets. Eckert, together with colleagues, is working with long liners to develop lures that will attract swordfish but not turtles. 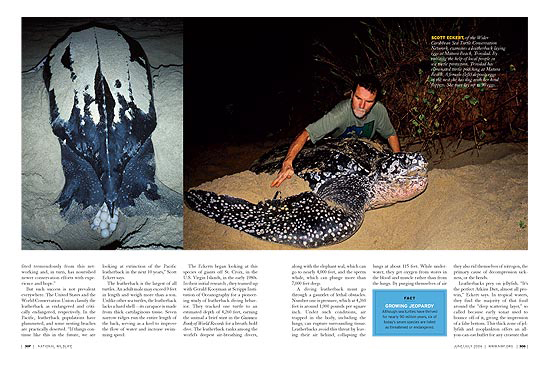 Larry Crowder, another biologist at the Nicholas School, says that changes in fishing equipment would be helpful but that the most effective measure is enforcement: "The more citations fisheries managers give out for ignoring the laws, the fewer turtle carcasses we find washed up on the shore."

Local support is a good thing, too. In Trinidad, Nature Seekers has become one of the Caribbean's most successful examples of conservation involving a local community. Dennis Sammy, the manager of Nature Seekers, thinks much of the group's effectiveness springs from the fact that members are residents of the community. "If you harm the sea turtles, we know where you live, and we know where to send the police," he says.

But these days, Nature Seekers spends most of its time guiding ecotourists rather than calling the police. On a Saturday night, sightseeing buses arrive with up to 150 tourists eager to see the turtles. Though some of the tourists are western vacationers, the majority are local residents who will acquire on the beach an awe of these animals, an awe that is spreading throughout the island. Even the customs official at the main airport breaks out in a smile when tourists say they are in Trinidad to see the big turtles.

Matura is a model for ecotourism development, and a number of tourism representatives from all over the Caribbean have been showing up regularly to study Matura methods. Some local tour guides are former poachers or come from poaching families. Scott Eckert thinks that bringing these people into the program is smart conservation: "The more you involve poachers and the sons and daughters of former poachers, the more you undermine the future of poaching." Karen Eckert agrees, "Conservation is all about people, it's about offering a better life to your children. By recognizing the essential linkages between a healthy Caribbean ecosystem and economic prosperity for Caribbean people, programs such as this one offer a vision of the future more sustainable and more lucrative than could ever have been realized if the last turtle had been killed."

Michael Tennesen wrote about lemurs and fossas in Madagascar in the April/May issue.

Global Warming: New Threat for Ancient Species
A recent study indicates that leatherbacks and other sea turtles may face an environmental threat that could undermine their survival. John Weishampel, an associate professor at the University of Central Florida who analyzed loggerhead sea turtle nesting records from a 25-mile stretch of Florida coast, discovered that the turtles today are coming ashore to lay eggs about 10 days earlier than they did as recently as 1989. Suspecting that global warming was accelerating the cold-blooded animal's life cycle, Weishampel looked at water temperature data collected offshore. He found that temperatures had increased by some 1.5 degrees F during the same 17-year period. The change in sea temperature could signal a critical problem for the turtles: Two-month-old hatchlings feed voraciously on clams, crabs, shrimp and other tiny marine invertebrates in waters off the nesting beaches. "We have no idea how warmer ocean temperatures are affecting these critical food species," says Weishampel. Leatherbacks and other sea turtle species also may find that familiar nesting beaches and offshore waters are being turned into alien territory by global warming, but more research is needed.