Turning Up the Heat on Your Property 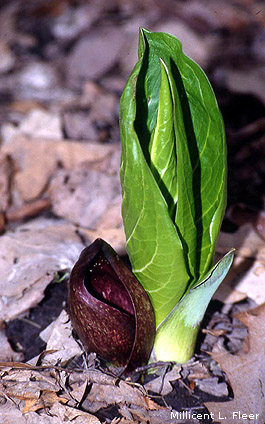 I ADMIT IT. I’m weird. In winter, most plant lovers who live in cool climates content themselves indoors by drooling over the flower photos in the gardening catalogues that appear in mailboxes at this time of year. But not me. I venture outside to search for signs of the skunk cabbage in the tiny bog I created behind my Shelter Island, New York, house. I’m a big admirer of this plant. It stinks and bears no big, beautiful blooms, but it has a lot of moxie.

Skunk cabbage, found in wetlands from Manitoba to Maine and south to Georgia, can flower when snow still blankets the ground and ice glazes the bare tree branches. It has been known to bloom inside snowbanks, creating its own ice caves. It can do this because it is one of the few plants capable of generating intense heat.

Like most members of the arum family, the skunk cabbage produces strange-looking blooms consisting of a leathery hood called a spathe that surrounds a stubby stalk called a spadix, covered with minute pale-colored flowers. The spathe is maroon, often mottled with yellow or green. Since it doesn’t open much, you have to peek inside to see the flower stalk. If you can stay outside long enough without freezing, you may also get a glimpse of insects such as carrion beetles and flesh flies, lured by the plant’s hothouse environment and color, which resembles raw or decaying flesh. The skunk cabbage also employs an olfactory come-on to entice these potential pollinators: its unmistakable eau de skunk, another way the plant mimics rotting meat.

Plants That Produce Their Own Heat

But it is the ability of the skunk cabbage and other so-called thermogenic plants to generate heat—lots of it—that has long captivated scientists. Temperature regulation is a characteristic shared by birds, mammals and even many flying insects, but it’s a surprise to find it in flowers. In the plant kingdom, unlike the animal world, heat generation is considered a primitive trait; most heat producers sprout from ancient lineages at the base of the botanical family tree.

The male cones of most cycads, among the earliest seed-bearing plants, generate heat, including coontie, native to Florida and Georgia. Other examples among the oldest flowering plants are magnolias, (such as the U.S. native southern magnolia), Dutchman’s pipes and water lilies. Biologists believe that heat production in plants evolved in association with early pollinators, especially beetles, during the Mesozoic, the age of the dinosaurs. Although the trait also shows up in a few plants of relatively recent origin, such as arums and palms, its absence among the newest plant families suggests its value as part of a pollinator-enticement scheme has declined.

All heat-generating plant tissues found so far are involved in reproduction. In many of the flowers, the female organs mature before their male counterparts. Although the females are ready to receive pollen, the males are not yet releasing it. So the plants have to briefly kidnap pollinators to consummate their sex lives, often detaining the insects inside a closed chamber in the bloom. The trapped insects may carry pollen they picked up during a previous encounter with an earlier-flowering plant of the same type. As they scramble around trying to escape, they dust the pollen on the female flower parts, facilitating fertilization, which produces seeds for the next generation of plants.

Scientists suggest that heat is a critical part of this process for several reasons. Heat helps launch the plants’ insect-attracting odors, whether sweet perfumes or nauseating stenches. It lures some potential pollinators by making the plants more closely resemble the carrion on which they feed and lay their eggs, because microbial processes heat up a carcass. And it keeps the pollinators themselves toasty, especially important for insects such as beetles that otherwise would be forced to expend a great deal of energy to stay warm. Heat-generating flowers “are like nightclubs for beetles,” observes Australian biologist Roger Seymour.

As flowering plants evolved over the eons, however, a more efficient pollinator-attraction system became predominant. Instead of offering a warm refuge, newfangled plants lure butterflies, bees and other potential flower fertilizers with a quick sip of nectar. Because they no longer have to trap pollinators for an entire night or longer, these plants are able to spread their pollen via many more insect partners. In Seymour’s words, “nightclubs were replaced by fast food.”

Primitive or not, the ability of the skunk cabbage to rev up its furnace is remarkable. Its flowers can maintain temperatures as much as 86 degrees F higher than the surrounding air—a feat accomplished by metabolic rates that are among the highest in the plant kingdom. It’s an ability that never ceases to amaze me every time I see skunk cabbages thriving in the bog behind my home during winter.

How to Grow Skunk Cabbage

In the wild, the skunk cabbage lives at the edge of wetlands, where the soil is often inundated in spring and remains moist year-round. In cultivation, it can thrive in a bog garden or on the banks of a stream or pond. The plant can grow in sun or shade, but it is fussy about soil. It prefers acidic soils rich in decomposed leaves, compost or other organic matter. Skunk cabbage will die in places that get too dry in summer, so be sure to locate the plant where the soil remains moist.