Far from the continent's famous Serengeti Plain, some elephants have adapted to life in harsh deserts and dense rain forests 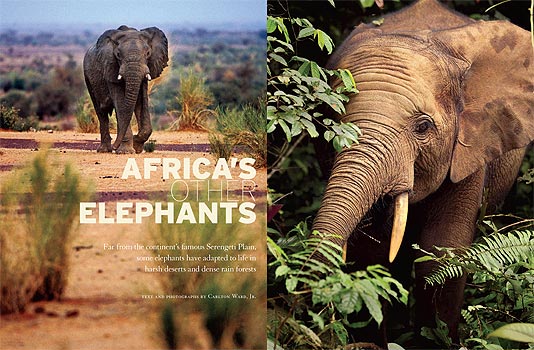 A LONE DESERT elephant (first spread, left) traverses the Sahel in Mali, a brutal environment south of the Sahara where elephants may migrate more than 250 miles a year to search for food and water. A group of adults huddles around a newborn (second spread, top left) at dusk as the herd travels through open sand during the dry season. As the season progresses, temperatures hover around 120 degrees F in the shade, and water quickly disappears. A large bull (second spread, top right) wallows in the remnants of a pool; two days later, the mud dried like concrete, and the elephants continued their migration (second spread, bottom) west toward Lake Banzena. Traveling in groups as large as 100, the Sahel's elephant population makes one of the longest migrations of any land animal.

Besides Mali, desert elephants are found only in Namibia. Both populations are threatened by run-ins with humans (when the animals eat or trample crops) and by their inhospitable, drought-prone habitat. Though some geneticists maintain that the desert elephant is a different species than Africa's savanna elephant (Loxodonta Africana), others remain unconvinced. 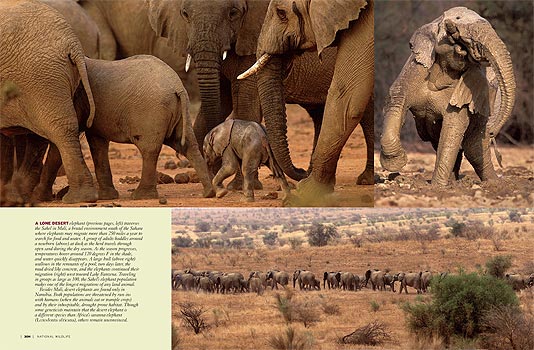 A FEMALE FOREST elephant and her two calves (third spread, bottom left) make a rare appearance in the open at the edge of a rain forest in coastal Gabon. More often, these secretive, well-camouflaged creatures are glimpsed only through deep foliage (first spread, right). Swamps (third spread, top) and coastal lagoons (third spread, bottom right) provide the animals ample fresh water. Unlike Mali's desert elephants, which migrate hundreds of miles for food and water, Gabon's forest elephants can have home ranges as small as a few square miles.

Outside Gabon, forest elephants are found throughout equatorial West Africa. But because they are so difficult to see--much less study--very little is known about the animals, even how many exist. DNA tests conducted a few years ago confirmed that the forest elephant (Loxodonta cyclotis) is a different species than the continent's savanna elephant. Physical differences include a longer, narrower jaw, rounded ears and smaller body size. While a male savanna elephant grows to be about 10 feet tall, a male forest elephant rarely reaches a height of 8 feet. 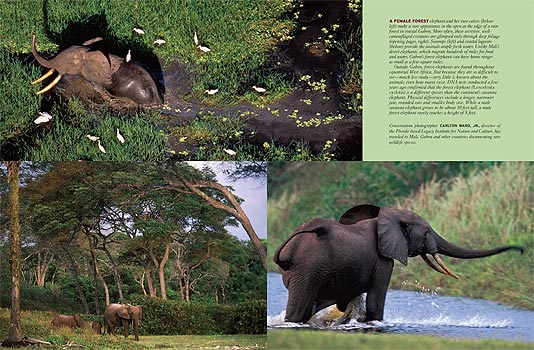