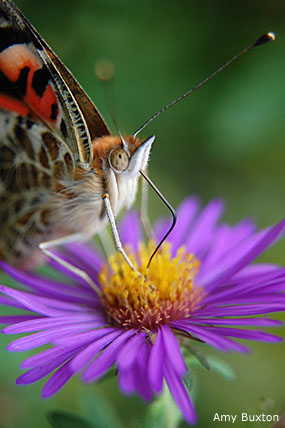 FROM LATE WINTER to the first frost is mating season for plants, and the air is thick with male dust—billions of tiny pollen grains launched by plants to fertilize the female flower organs of other members of the species. Most of us are blithely unaware of any hazard posed by this botanical love fest, technically known as cross-pollination. But an estimated 35.9 million people in the United States alone will be dabbing continually at moist eyes and runny noses. They are allergic to pollen, and suffer from a type of seasonal allergic rhinitis commonly called hay fever.

If you count yourself among them, and also long to be outside tending a garden during the months when pollen levels are the highest, there are steps you can take to reduce your exposure. Indeed, it is possible to have a healthy garden that pleases not only you but also the birds, bees and other animals that are the primary pollinators of many plants.

Although there are various theories about why more and more people are suffering from asthma (which can be triggered by pollen), hay fever and other allergies, no one is sure why. But one thing seems clear: Because of global warming, the problem is bound to get worse. Scientists have discovered, for example, that the more carbon dioxide there is in the air, the faster that ragweed, one of the worst allergy-causing plants, grows and the more pollen it produces.

The notion that gardening choices can dramatically reduce pollen levels has received a lot of press of late, but not all the advice currently being offered on allergy-friendly gardening is accurate and some is downright unfriendly to wildlife. One oft-mentioned solution is to minimize pollen by eradicating male plants of so-called dioecious species from the landscape. (Although most plants have both male and female flowers, or even male and female parts in each flower, dioecious species have separate male and female plants.) But “you can’t tell people ‘don’t plant male plants’ if you want plants to be able to perpetuate themselves,” says NWF Chief Naturalist Craig Tufts. And without male plants and their pollen to fertilize flowers, he adds, there would be far fewer berries and other food for wildlife. 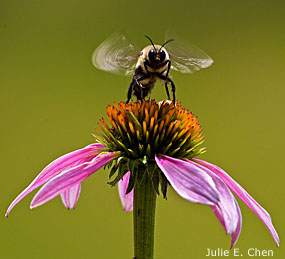 Most of the 270,000 or so known species of flowering plants depend either on animals, primarily insects, or wind to disperse their pollen. It is the latter group of plants, including birch, Bermuda grass and ragweed, that are the most common causes of hay fever. Their pollen tends to be small and buoyant so it can be carried airborne by the gentlest breeze. Fortunately for gardeners and wildlife lovers, plants pollinated by animals have not only brightly colored blooms but also large, heavy pollen that is less likely to be allergenic.

Not all plants with wind-dispersed pollen are significant causes of hay fever, but together the ones that are produce a long period of suffering. Seasonal allergic rhinitis in the early spring is usually triggered by tree pollens. In late spring and early summer, pollinating grasses are the major culprits. Weeds such as ragweed are most responsible for late summer and fall hay fever in much of North America. What’s more, mold spores can be found in the air at any time of year, except when the ground is blanketed by snow.

This doesn’t mean, however, that you have to give up your garden for a sterile expanse of concrete and gravel. Environmentally minded gardeners can take a few commonsense steps to reduce their exposure to troublesome pollens and mold spores:

Plant native wildflowers that are pollinated by animals. Examples include asters, goldenrods and coneflowers.

Create a diverse landscape of many different plant types to minimize the amount of pollen from any one species.

If you suffer from hay fever, consult an allergist to determine which plant or plants trigger your allergies, and do not grow them in your garden. Although it is almost impossible to avoid these plants because their pollen can travel many miles on the wind, this will lessen your exposure.

To minimize your exposure to mold spores, don’t mulch too deeply—2 inches is generally best—and soak the mulch right after applying it. If you’re allergic to mold, use bark chips or nuggets made from pines or other softwood trees, which are relatively rot resistant. Avoid mulch made from hardwood trees, or any mulch ground too finely.

If possible, don’t garden when pollen and mold counts are high. One place to find this information is the American Academy of Allergy, Asthma & Immunology website.

New York journalist Janet Marinelli writes frequently about native plants for this magazine (this article first appeared in the April/May 2007 issue). You can visit her blog on natural gardening and sustainable living at www.janetmarinelli.com.