Birding in the Texas Tropics

What's the best place in the United States to see unusual birds during the cold months? It's hard to beat the Lower Rio Grande Valley 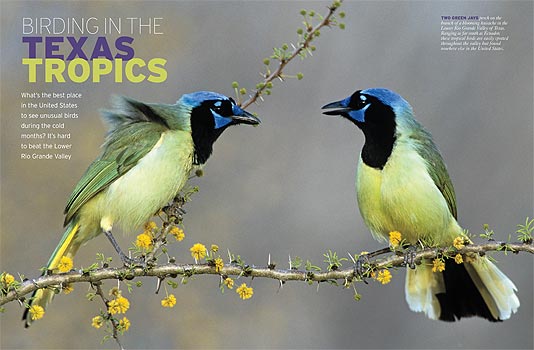 THE BIRD is unmistakably tropical. Gaudily clad in shades of brilliant blue, green and yellow, trimmed with a neat black mask and bib, it energetically hops from branch to branch in the shade of a tall Texas ebony. Joined by rowdy trio of its own kind, the bird zigzags up the tree toward the crown, cocking its head to inspect twigs and seedpods for caterpillars or other insects. Checking a field guide confirms that the bird—a green jay, Cyanocorax yncas—is a full-time “tropical species” that ranges as far south as Ecuador. Yet here it is in the United States—along with a dazzling, orange-yellow Altamira oriole singing on a midstory branch and a plump, turkeylike plain chachalaca foraging on the ground below. Both of these birds are considered tropical as well. 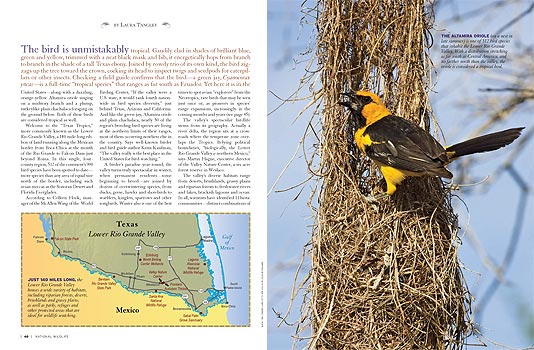 Welcome to the “Texas Tropics,” more commonly known as the Lower Rio Grande Valley, a 140-mile-long ribbon of land running along the Mexican border from Boca Chica at the mouth of the Rio Grande to Falcon Dam just beyond Roma. In this single, four-county region, 512 of the continent’s 900 bird species have been spotted to date—more species than any area of equal size north of the border, including such avian meccas as the Sonoran Desert and Florida Everglades.

According to Colleen Hook, manager of the McAllen Wing of the World Birding Center, “If the valley were a U.S. state, it would rank fourth nationwide in bird species diversity,” just behind Texas, Arizona and California. And like the green jay, Altamira oriole and plain chachalaca, nearly 50 of the region’s breeding bird species are living at the northern limits of their ranges, most of them occurring nowhere else in the country. Says well-known birder and bird guide author Kenn Kaufman, “The valley really is the best place in the United States for bird-watching.”

A birder’s paradise year-round, the valley turns truly spectacular in winter, when permanent residents—some beginning to breed—are joined by dozens of overwintering species, from ducks, geese, hawks and shorebirds to warblers, kinglets, sparrows and other songbirds. Winter also is one of the best times to spot avian “explorers” from the Neotropics, rare birds that may be seen just once or, as pioneers in species’ range expansions, increasingly in the coming months and years. 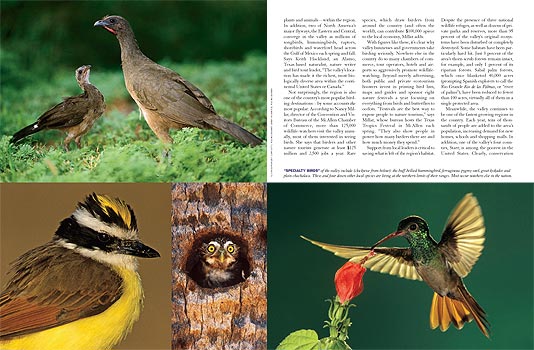 The valley’s spectacular birdlife stems from its geography. Actually a river delta, the region sits at a crossroads where the temperate zone overlaps the Tropics. Belying political boundaries, “biologically, the Lower Rio Grande Valley is northern Mexico,” says Martin Hagne, executive director of the Valley Nature Center, a six-acre forest reserve in Weslaco.

The valley’s diverse habitats range from deserts, brushlands, grassy plains and riparian forests to freshwater rivers and lakes, brackish lagoons and ocean. In all, scientists have identified 11 biotic communities—distinct combinations of plants and animals—within the region. In addition, two of North America’s major flyways, the Eastern and Central, converge in the valley as millions of songbirds, hummingbirds, raptors, shorebirds and waterfowl head across the Gulf of Mexico each spring and fall. Says Keith Hackland, an Alamo, Texas-based naturalist, nature writer and bird tour leader, “The valley’s location has made it the richest, most biologically diverse area within the continental United States or Canada.”

Not surprisingly, the region is also one of the country’s most popular birding destinations—by some accounts the most popular. According to Nancy Millar, director of the Convention and Visitors Bureau of the McAllen Chamber of Commerce, more than 125,000 wildlife-watchers visit the valley annually, most of them interested in seeing birds. She says that birders and other nature tourists generate at least $125 million and 2,500 jobs a year. Rare species, which draw birders from around the country (and often the world), can contribute $100,000 apiece to the local economy, Millar adds.

With figures like these, it’s clear why valley businesses and governments take birding seriously. Nowhere else in the country do so many chambers of commerce, tour operators, hotels and airports so aggressively promote wildlife-watching. Beyond merely advertising, both public and private ecotourism boosters invest in printing bird lists, maps and guides and sponsor eight nature festivals a year focusing on everything from birds and butterflies to ocelots. “Festivals are the best way to expose people to nature tourism,” says Millar, whose bureau hosts the Texas Tropics Festival in McAllen each spring. “They also show people in power how many birders there are and how much money they spend.”

Support from local leaders is critical to saving what is left of the region’s habitat. Despite the presence of three national wildlife refuges, as well as dozens of private parks and reserves, more than 95 percent of the valley’s original ecosystems have been disturbed or completely destroyed. Some habitats have been particularly hard hit. Just 3 percent of the area’s thorn-scrub forests remain intact, for example, and only 1 percent of its riparian forests. Sabal palm forests, which once blanketed 40,000 acres (prompting Spanish explorers to call the Rio Grande Rio de las Palmas, or “river of palms”), have been reduced to fewer than 100 acres, virtually all of them in a single protected area. 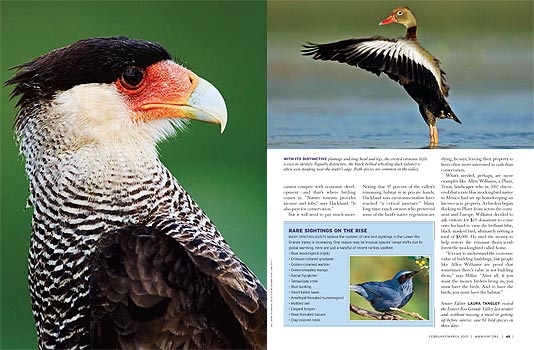 Meanwhile, the valley continues to be one of the fastest growing regions in the country. Each year, tens of thousands of people are added to the area’s population, increasing demand for new homes, schools and shopping malls. In addition, one of the valley’s four counties, Starr, is among the poorest in the United States. Clearly, conservation cannot compete with economic development—and that’s where birding comes in. “Nature tourism provides income and jobs,” says Hackland. “It also pays for conservation.”

But it will need to pay much more. Noting that 97 percent of the valley’s remaining habitat is in private hands, Hackland says environmentalists have reached “a critical juncture.” Many long-time ranch owners who preserved some of the land’s native vegetation are dying, he says, leaving their property to heirs often more interested in cash than conservation.

What’s needed, perhaps, are more examples like Allen Williams, a Pharr, Texas, landscaper who in 2002 discovered that a rare blue mockingbird native to Mexico had set up housekeeping on his two-acre property. As birders began flocking to Pharr from across the continent and Europe, Williams decided to ask visitors for $10 donations to come onto his land to view the brilliant blue, black-masked bird, ultimately netting a total of $8,000. He used the money to help restore the remnant thorn-scrub forest the mockingbird called home.

Senior Editor Laura Tangley visited the Lower Rio Grande Valley last winter and, without missing a meal or getting up before sunrise, saw 61 bird species in three days.

Rare Sightings on the Rise

Many ornithologists believe the number of rare bird sightings in the Lower Rio Grande Valley is increasing. One reason may be tropical species’ range shifts due to global warming. Here are just a handful of recent rarities spotted:

For adventurous birders with a few extra days to spend, a short side trip south of the Texas border will yield dozens more species than even the Lower Rio Grande Valley has to offer. The destination: El Cielo Biosphere Reserve, nearly half a million acres of tropical, cloud and highland forest on the slopes of the Sierra Madre Oriental. Birds commonly spotted include the ornate hawk eagle, thicket tinamou, singing quail, military macaw, Aztec parakeet, maroon-fronted parrot, white-crowned parrot, bronze-winged woodpecker, ivory-billed woodcreeper, flame-colored tanager, mountain trogon and 15 species of hummingbirds. A keel-billed toucan, Mexico’s largest toucan, has even been spotted in the reserve, which is just a few hours drive south of the border. For more information, see www.elcielobiosphere.org/birding.html. To arrange visits to El Cielo from the Lower Rio Grande Valley, contact Nancy Millar of the McAllen Convention and Visitor’s Bureau (nmillar@mcallencvb.com).—Laura Tangley