As global warming transforms their habitat, can plants and animals of the Andean cloud forest move to higher elevations fast enough to survive? 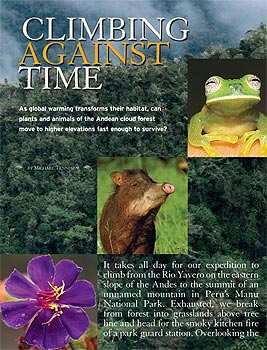 IT TAKES ALL DAY for our expedition to climb from the Rio Yavero on the eastern slope of the Andes to the summit of an unnamed mountain in Peru's Manu National Park. Exhausted, we break from forest into grasslands above tree line and head for the smoky kitchen fire of a park guard station. Overlooking the Amazon Basin, we watch a cloudbank, black and heavy with rain, move toward us.

I am trekking through one of the world's richest tropical ecosystems--the Andean cloud forest--with Wake Forest University biologist Miles Silman and a team of his colleagues from Wake Forest and the University of Cuzco in Peru. The scientists are seeking to better understand the forest, including the forces that shaped its past, the plant and animal species that inhabit it today and, especially, what effects global warming may have on it in the future. Already, the researchers are discovering troubling signs of change. As the climate continues to warm, says Silman, cloud forest plants and animals must begin an uphill race to move above their present ranges in just a few generations--or become extinct. It is a race he fears that many species will lose.

Wet and Wild
Morning comes, the sun rises over the basin, and we leave the grasslands to head down to Callanga, a small valley in the heart of the park. Soon we enter a zone of vegetation at cloud level where constant misting has generated a lush collection of greenery covering virtually everything but the muddy trail. Competing for precious patches of bark on which to secure their roots, ferns, mosses, bromeliads and orchids--collectively known as epiphytes--shroud the trees. In all directions I see nothing but a tangle of vines, roots, plants and trunks piled on top of one another.

It is this extraordinary density of epiphytes and other plants, along with wet humus soil and constant immersion in clouds, that makes cloud forests different from all other kinds of woodland. Here everything drips, including our clothes. Moisture arrives both vertically, from the rain, and horizontally, from the clouds. At 6,000 feet, cloud forests receive up to 20 feet of moisture a year from rain, but the clouds may add another 5 to 20 feet.

Manu's cloud forests are part of the Tropical Andes, one of the world's 25 "biodiversity hotspots"--regions with high numbers of plant and animal species, many of them endemic, or found nowhere else on Earth. According to biologist Lee Hannah of Conservation International, the nonprofit organization that designates these high-priority areas, the Tropical Andes is not just any hotspot, "but the single richest and most diverse hotspot on the planet." The region harbors 45,000 species of plants, 20,000 of them endemic. And it is home to 1,666 bird species, about twice as many as the number in Canada and the United States combined. 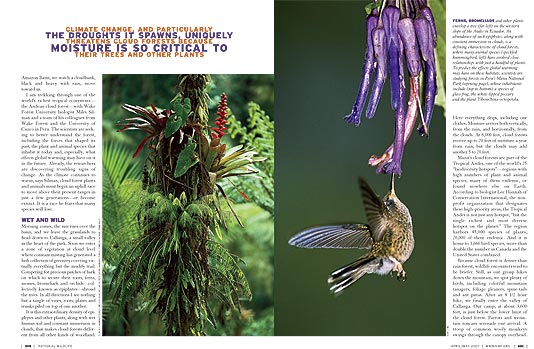 Because cloud forest is denser than rain forest, wildlife encounters tend to be briefer. Still, as our group hikes down the mountain, we spot plenty of birds, including colorful mountain tanagers, foliage gleaners, spine-tails and ant pittas. After an 8 1/2 hour hike, we finally enter the valley of Callanga. Our camp, at about 3,600 feet, is just below the lower limit of the cloud forest. Parrots and mountain toucans serenade our arrival. A troop of common wooly monkeys swings through the canopy overhead. A black hawk-eagle floats out of a tree and soars down the canyon. The Tropical Andes is also home to the mountain tapir, white-lipped peccary and spectacled bear, South America's only bear species, which is found nowhere else on the continent but in montane forests.

Unique Threat
Climate change, and particularly the droughts it spawns, uniquely threatens cloud forests because moisture is so critical to their trees and other plants. The rare drought can be catastrophic, giving trees the equivalent of a heart attack by blocking vessels that pull water up from the roots into the canopy. In addition, cloud forest plants have what Silman refers to as "shoestring distributions"--extraordinarily narrow ranges that may cover hundreds of miles horizontally but only minute distances vertically. "I could throw a rock across the elevational range of many different species," he says.

This means that as global warming pushes clouds to higher elevations, species must either move with them or lose the heavy moisture they depend on. The journey may be particularly daunting for trees, which, first, must have their seeds moved uphill by wind, birds or mammals. Next, the seeds must germinate and the seedlings grow into adults (a minimum of 30 to 40 years) before the trees will be ready to bear fruit and send out seeds of their own. "Some species will make it and some won't," says Silman, "and since almost half of the plant species in these forests are endemic to the Tropical Andes, that means if they go extinct here, they go extinct . . . period." The same goes for countless insect, bird and mammal species that rely on those plants. In cloud forests, many animals have evolved close relationships with just one or a few plant species, which makes them particularly vulnerable. 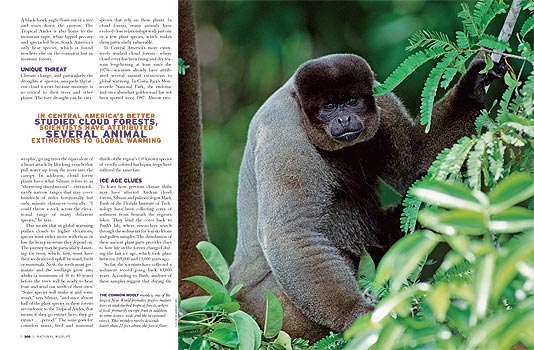 In Central America's more extensively studied cloud forests--where cloud cover has been rising and dry seasons lengthening at least since the 1970s--scientists already have attributed several animal extinctions to global warming. In Costa Rica's Monteverde National Park, the endemic and once abundant golden toad has not been spotted since 1987. Almost two-thirds of the region's 110 known species of vividly colored harlequin frogs have suffered the same fate.

Ice Age Clues
To learn how previous climate shifts may have affected Andean cloud forests, Silman and paleoecologist Mark Bush of the Florida Institute of Technology have been collecting cores of sediment from beneath the region's lakes. They send the cores back to Bush's lab, where researchers search through the sediments for leaf skeletons and pollen samples. The distribution of these ancient plant parts provides clues to how life in the forests changed during the last ice age, which took place between 105,000 and 11,000 years ago.

So far, the scientists have collected a sediment record going back 43,000 years. According to Bush, analyses of these samples suggest that during the ice age, when regional temperatures fell between 9 and 16 degrees F, cloud forest plant species survived by migrating down the mountains into the Amazon Basin. Thus while moving fields of ice plowed under virtually all North American forests, Andean cloud forests persisted in the basin's warm equatorial sun. As the Earth warmed, plant species began climbing back up the mountain slopes.

The bad news, however, is that it took the forests about 3,000 years to make that climb. With today's rate of global warming, says Silman, "plants are going to have to migrate, on average, 2,600 feet in fewer than 100 years to remain in equilibrium with climate." 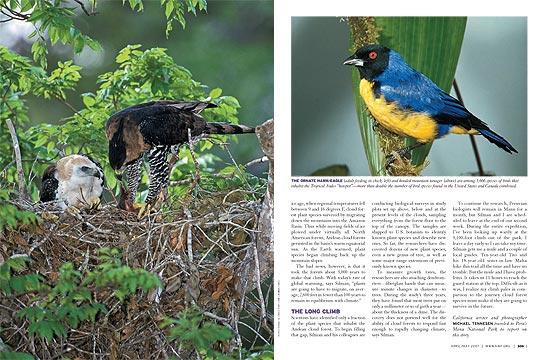 The Long Climb
Scientists have identified only a fraction of the plant species that inhabit the Andean cloud forest. To begin filling that gap, Silman and his colleagues are conducting biological surveys in study plots set up above, below and at the present levels of the clouds, sampling everything from the forest floor to the top of the canopy. The samples are shipped to U.S. botanists to identify known plant species and describe new ones. So far, the researchers have discovered dozens of new plant species, even a new genus of tree, as well as some major range extensions of previously known species.

To measure growth rates, the researchers are also attaching dendrometers--fiberglass bands that can measure minute changes in diameter--to trees. During the study's three years, they have found that most trees put on only a millimeter or so of girth a year--about the thickness of a dime. The discovery does not portend well for the ability of cloud forests to respond fast enough to rapidly changing climate, says Silman.

To continue the research, Peruvian biologists will remain in Manu for a month, but Silman and I are scheduled to leave at the end of our second week. During the entire expedition, I've been looking up warily at the 9,100-foot climb out of the park. I leave a day early so I can take my time. Silman gets me a mule and a couple of local guides. Ten-year-old Tito and his 18-year-old sister-in-law Malta hike this trail all the time and have no trouble. But the mule and I have problems. It takes us 11 hours to reach the guard station at the top. Difficult as it was, I realize my climb pales in comparison to the journey cloud forest species must make if they are going to survive in the future.