Drinking on the Fly

The unique habits of thirsty bats are putting the animals at risk throughout the arid West, but a simple solution may solve this problem 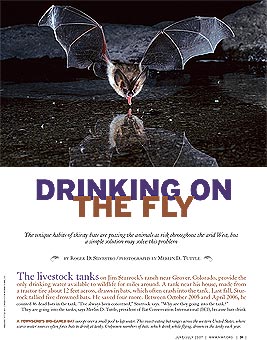 THE LIVESTOCK TANKS on Jim Sturrock's ranch near Grover, Colorado, provide the only drinking water available to wildlife for miles around. A tank near his house, made from a tractor tire about 12 feet across, draws in bats, which often crash into the tank. Last fall, Sturrock tallied five drowned bats. He saved four more. Between October 2005 and April 2006, he counted 46 dead bats in the tank. "I've always been concerned," Sturrock says. "Why are they going into the tank?"

They are going into the tanks, says Merlin D. Tuttle, president of Bat Conservation International (BCI), because bats drink on the wing, swooping over water for a quick sip. But the tanks are often treacherous water sources, depending on how they are constructed. The bats would do better to drink from natural ponds and streams, but human development has so profoundly changed western water ecology that, from the vast deserts of Arizona to the dry grasslands of Wyoming and Montana, livestock tanks are often the only reliable water sources for wildlife. For bats, they are critical. Because of their large wing surface, bats can lose up to 50 percent of their body weight within 24 hours through water evaporation. "They're the most susceptible to dehydration of all desert animals," Tuttle says. 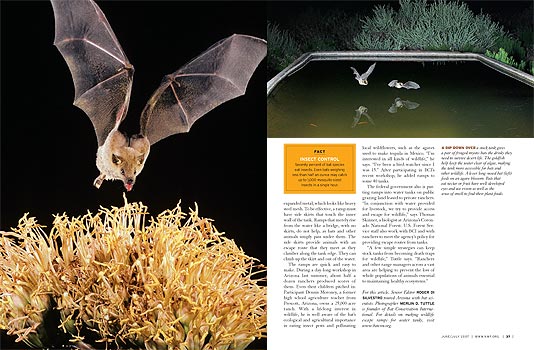 The problem of water scarcity isn't limited to bats. Tanks provide water for many creatures, from swallows, golden eagles and quail to bears, bees and pronghorn antelope. These animals also fall into tanks and drown. "A rancher in Rodeo, New Mexico, told me that when he had the Game and Fish Department come to dart and remove a live mule deer doe in one of his water storage tanks, they found a drowned mountain lion," says BCI biologist Dan Taylor.

More than 70 percent of western natural water systems have been degraded or lost, according to the BCI report Water for Wildlife: A Handbook for Ranchers and Range Managers, published this year. Hundreds of thousands of stock tanks have been scattered across the West by livestock growers, and wildlife species have become dependent on them. "There are lots of places where the only remaining water is confined to livestock tanks," Tuttle says.

Arizona, home to 28 bat species, is a poster child for the plight of these animals, which are key predators of night-flying insects as well as crucial plant pollinators and seed dispersers. Historically, grasses grew richly in much of Arizona. Rainfall percolated slowly into the ground, filtering past grass roots and through the soil into rivers and streams that ran all year.

Overgrazing by livestock, mostly from the 1880s to the 1920s, reduced grasses and other vegetation in large parts of the state. Once the ground was denuded, rainfall rushed over the surface, flooded into streambeds and passed rapidly away, leaving the beds empty for much of the year and deeply eroded. Other factors have played a role, too. Agricultural irrigation has lowered water tables, which affects the flow of surface waters, as has the spread of urban and suburban areas that tap into local water sources.

On many Arizona ranches, water is drawn from the ground by electrical pumps, often powered with solar cells. The water often is stored in tanks at least 20 feet in diameter and more than 4 feet high. Some tower 15 or 20 feet above the ground. From these tanks, water is piped to troughs of varying sizes and materials, from steel or concrete rectangular containers 4 or 5 feet long and 2 or 3 feet across to tractor tires like the one used by Jim Sturrock. 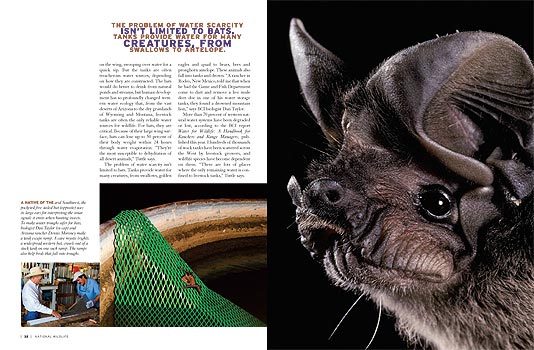 Tank size and positioning are critical because bats drink on the wing. Most bat species need open water surfaces at least 10 feet long and no less than 2.5 feet wide, according to the BCI report. Bats with relatively short, broad wings tend to be more maneuverable than are bats with longer, narrower wings. Some broad-winged bats, such as the California myotis, can use small troughs, while the big free-tailed bat, with its long, narrow wings, needs at least 50 feet of open water. The difficulty is compounded when a tank is subdivided by braces or even by a fence line, for watering livestock in adjoining pastures. "If I were the devil trying to be really mean to bats, this is how I'd do it," Tuttle says of these tank obstructions.

A study by the U.S. Department of Agriculture's Natural Resources Conservation Service in Arizona found that even the most maneuverable bats required three to six times as many passes to reach water in subdivided tanks. "Bats being denied access because of obstructions at smaller and mid-size troughs can have serious negative effects for bat species and local populations for miles around," says Taylor.

In addition to size requirements, tanks work best for bats when no plants or other objects block flyways leading to the tanks and when the tanks are positioned with the long axis parallel to prevailing wind, which reduces crosswind turbulence.

When bats or birds fall into tanks, they splash along the edges searching for a way out. If the water level is even a few inches below the rim, the animals are likely to find escape impossible. How many bats are killed in stock tanks yearly is unknown. However, the loss is so high, Tuttle says, that biologists have recommended skimming stock tanks for bat skulls to determine which species occur in an area.

To reduce this threat BCI, in partnership with the Natural Resources Conservation Service, last year launched a program for putting escape ramps into troughs and storage tanks. A variety of ramps can be made out of expanded metal, which looks like heavy steel mesh. To be effective, a ramp must have side skirts that touch the inner wall of the tank. Ramps that merely rise from the water like a bridge, with no skirts, do not help, as bats and other animals simply pass under them. The side skirts provide animals with an escape route that they meet as they clamber along the tank edge. They can climb up the skirt and out of the water. 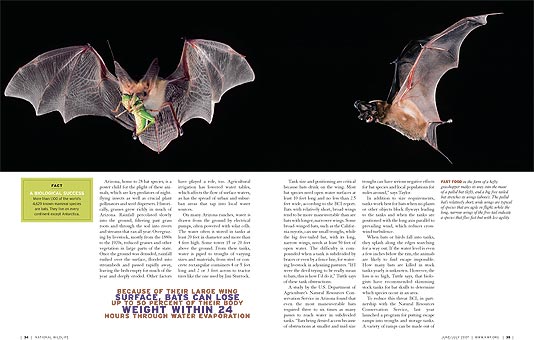 The ramps are quick and easy to make. During a day-long workshop in Arizona last summer, about half a dozen ranchers produced scores of them. Even their children pitched in. Participant Dennis Moroney, a former high school agriculture teacher from Prescott, Arizona, owns a 25,000-acre ranch. With a lifelong interest in wildlife, he is well aware of the bat's ecological and agricultural importance in eating insect pests and pollinating local wildflowers, such as the agaves used to make tequila in Mexico. "I'm interested in all kinds of wildlife," he says. "I've been a bird-watcher since I was 15." After participating in BCI's recent workshop, he added ramps to some 40 tanks.

The federal government also is putting ramps into water tanks on public grazing land leased to private ranchers. "In conjunction with water provided for livestock, we try to provide access and escape for wildlife," says Thomas Skinner, a biologist at Arizona's Coronado National Forest. U.S. Forest Service staff also work with BCI and with ranchers to meet the agency's policy for providing escape routes from tanks.

"A few simple strategies can keep stock tanks from becoming death traps for wildlife," Tuttle says. "Ranchers and other range managers across a vast area are helping to prevent the loss of whole populations of animals essential to maintaining healthy ecosystems."