Gaining in popularity for the energy savings it offers, using vegetation in place of traditional roofing material also provides unconventional habitat for wildlife 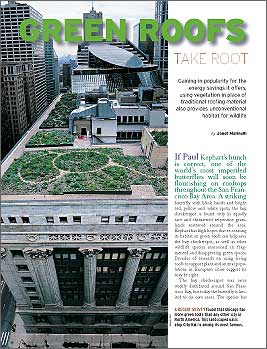 IF PAUL KEPHART'S HUNCH is correct, one of the world's most imperiled butterflies will soon be flourishing on rooftops throughout the San Francisco Bay Area. A striking butterfly with black bands and bright red, yellow and white spots, the bay checkerspot is found only in equally rare and threatened serpentine grasslands scattered around the area. Kephart has high hopes that re-creating its habitat on green roofs can help save the bay checkerspot, as well as other wildlife species marooned in fragmented and disappearing green spaces. Decades of research on using living roofs to support plant and animal populations in European cities suggest he may be right.

The bay checkerspot was once widely distributed around San Francisco Bay, but today the butterfly is limited to six core areas. The species has been in serious decline for more than two decades, mostly because so much of its habitat has been lost to urban or suburban sprawl or degraded by invasive Eurasian grasses and the suppression of the wildfires that once kept serpentine grasslands healthy. It was put on the federal list of endangered and threatened species in 1987.

Kephart, executive director of Rana Creek, a Carmel, California-based company specializing in habitat restoration and living architecture, is among a growing number of biologists who, in his words, see "green roofs as a way to restore biodiversity to the urban environment." To create the most ecologically functional roofs, they look for native plant communities that survive in similar conditions and can serve as models. Kephart is using grassland associated with serpentine soils as a local model for a handful of Bay Area green roofs, including the 2.5-acre roof of the California Academy of Sciences in San Francisco. Soils associated with serpentinite, a bluish green stone that formed at the Earth's molten core and bubbled up through the San Andreas Fault to the surface, are dry, shallow and nutrient poor--the same as soils found on green roofs that are not coddled with fertilizer and doused regularly with water.

Although only a select few plants are able to survive in serpentine soil, those that can include primary food plants of bay checkerspot caterpillars, such as dwarf plantain and purple owl's clover. They also include plants that provide nectar for the adult butterflies, such as California goldfields and tidy-tips. A few years ago, Kephart realized that five of the green roofs his company was working on were smack in the middle of the bay checkerspot's range, and the plants they were putting on these rooftops included the species essential for the butterfly's life cycle. Just as serendipitous was his discovery that the bay checkerspot has always existed in the wild as a metapopulation, the technical term for an ensemble of dispersed subpopulations. It suddenly dawned on him that it may be possible to help support the species with a network of living roofs scattered throughout the Bay Area. 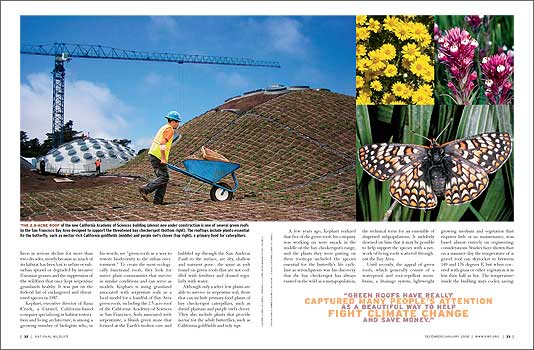 Until recently, the appeal of green roofs, which generally consist of a waterproof and root-repellent membrane, a drainage system, lightweight growing medium and vegetation that requires little or no maintenance, was based almost entirely on engineering considerations. Studies have shown that on a summer day the temperature of a gravel roof can skyrocket to between 140 and 176 degrees F, but when covered with grass or other vegetation it is less than half as hot. The temperature inside the building stays cooler, saving energy on air-conditioning. In winter the building stays warmer, conserving energy on heating. And whereas rainfall is immediately whooshed from conventional roofs to storm drains, sending untreated sewage directly into waterways in cities with combined storm-water and sanitary sewers, the plants on living roofs act like sponges, taking up much of the precipitation; the rest drains gradually from the roof. Living roofs have other environmental advantages as well, from adding green space back to cities to filtering pollutants from unhealthy air.

For a time, the growth of the North American green roof industry was hampered by the fact that living roofs cost more than conventional roofing systems (although they last about twice as long). But as the environmental benefits of living roofs have become more apparent, the industry has begun to take off, growing by more than 25 percent in 2006 alone, according to a survey conducted by Green Roofs for Healthy Cities. In the words of Steven Peck, president of the trade group, "Green roofs have really captured many people's attention as a beautiful way to help fight climate change and save money. Green roofs deliver more public and private benefits than any other green building technology, so we anticipate that strong growth will continue." Chicago tops the list of North American cities with the most green roofs, with one million square feet of living roofs constructed and another two million in development. 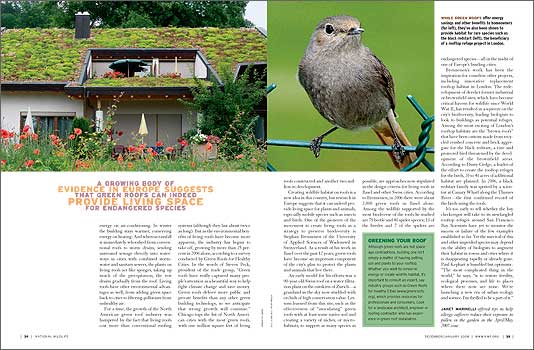 Creating wildlife habitat on roofs is a new idea in this country, but research in Europe suggests that it can indeed provide living space for plants and animals, especially mobile species such as insects and birds. One of the pioneers of the movement to create living roofs as a strategy to preserve biodiversity is Stephan Brenneisen of the University of Applied Sciences of Wadenswil in Switzerland. As a result of his work in Basel over the past 12 years, green roofs have become an important component of the city's plan to protect the plants and animals that live there.

An early model for his efforts was a 90-year-old Swiss roof on a water-filtration plant on the outskirts of Zurich--a grassland in the sky now studded with orchids of high conservation value. Lessons learned from this site, such as the effectiveness of "inoculating" green roofs with at least some native soil and creating a variety of niches, or microhabitats, to support as many species as possible, are approaches now stipulated in the design criteria for living roofs in Basel and other Swiss cities. According to Brenneisen, in 2006 there were about 2,000 green roofs in Basel alone. Among the wildlife supported by the most biodiverse of the roofs he studied are 79 beetle and 40 spider species; 13 of the beetles and 7 of the spiders are endangered species--all in the midst of one of Europe's bustling cities.

Brenneisen's work has been the inspiration for countless other projects, including innovative replacement rooftop habitat in London. The redevelopment of derelict former industrial or brownfield sites, which have become critical havens for wildlife since World War II, has resulted in a squeeze on the city's biodiversity, leading biologists to look to buildings as potential refuges.

Among the most exciting of London's rooftop habitats are the "brown roofs" that have been custom made from recycled crushed concrete and brick aggregate for the black redstart, a rare and protected bird threatened by the development of the brownfield areas. According to Dusty Gedge, a leader of the effort to create the rooftop refuges for the birds, 20 to 40 acres of additional habitat are planned. In 2006, a black redstart family was spotted by a scientist at Canary Wharf along the Thames River--the first confirmed record of the birds using the roofs.

It's too early to tell whether the bay checkerspot will take to its newfangled rooftop refuges around San Francisco Bay. Scientists have yet to monitor the success or failure of the few examples established so far. Yet the survival of this and other imperiled species may depend on the ability of biologists to augment their habitat in towns and cities where it is disappearing rapidly or already gone. Paul Kephart is humbled but optimistic. "The most complicated thing in the world," he says, "is to restore fertility, ecological processes, and life to places where there now are none. We're launching a new era of urban ecology and science. I'm thrilled to be a part of it."

Janet Marinelli offered tips to help allergy sufferers reduce their exposure to pollen in the garden in the April/May 2007 issue.

Although green roofs are not space-age contraptions, building one isn't simply a matter of hauling potting soil and plants to your rooftop. Whether you want to conserve energy or create wildlife habitat, it's important to consult an expert, say industry groups such as Green Roofs for Healthy Cities (www.greenroofs.org), which provides resources for professionals and consumers. Look for a landscape architect, engineer or roofing contractor who has experience in green roof installation.