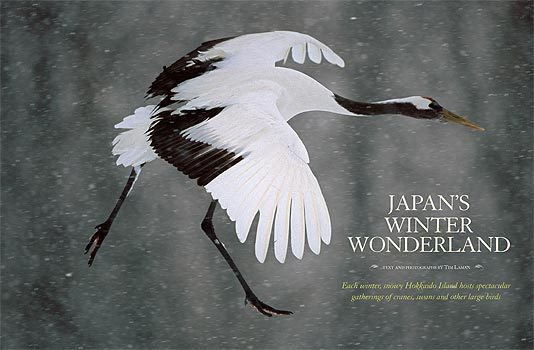 IT IS NOT the Japan you may imagine, this white world graced with birds. I am on the northern island of Hokkaido in the heart of winter, and the snow just keeps falling—it is one of the snowiest places in the world. The red-crowned cranes seem to float in, settling on snow-covered fields where there appears to be no distinction between earth and sky. In this setting, it is easy to imagine how the birds became imbued with spiritual significance for the Japanese people. For a thousand years, cranes have been featured in art and poetry, becoming a totemic symbol of this island nation. Today they appear on everything from thousand-yen bills to airplanes, with hundreds of folded paper versions hanging at temples and memorials where it is hoped they will bring good luck.

Unfortunately, the birds’ exalted status has not prevented their exploitation. Once found throughout the Japanese islands, cranes were reduced to a few dozen by the early 1900s, victims of hunting and habitat loss. Ultimately protected by the government, the birds rebounded on Hokkaido, where a large marshland, the Kushiro Mire, became their last stronghold in the country. During the 1950s, farmers started putting out corn for the cranes in winter, a practice that continues today. Thanks to such provisioning and continued protection, their numbers are now up to a hearty 900 birds. The species’ full recovery, however, is limited by insufficient breeding habitat as marshland is nibbled away for agricultural and urban development. 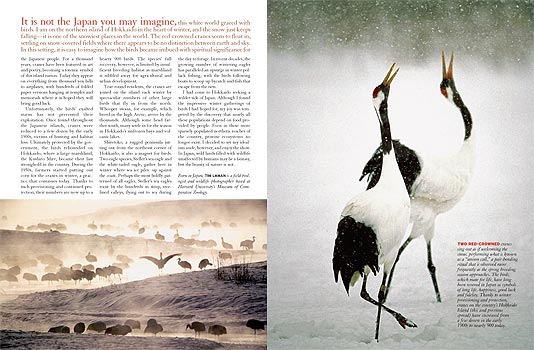 Year-round residents, the cranes are joined on the island each winter by spectacular numbers of other large birds that fly in from the north. Whooper swans, for example, which breed in the high Arctic, arrive by the thousands. Although some head farther south, many settle in for the season in Hokkaido’s unfrozen bays and volcanic lakes.

Shiretoko, a rugged peninsula jutting out from the northeast corner of Hokkaido, is also a magnet for birds. Two eagle species, Steller’s sea eagle and the white-tailed eagle, gather here in winter where sea ice piles up against the coast. Perhaps the most boldly patterned of all eagles, Steller’s sea eagles roost by the hundreds in steep, tree-lined valleys, flying out to sea during the day to forage. In recent decades, the growing number of wintering eagles has paralleled an upsurge in winter pollack fishing, with the birds following boats to scoop up bycatch and fish that escape from the nets. 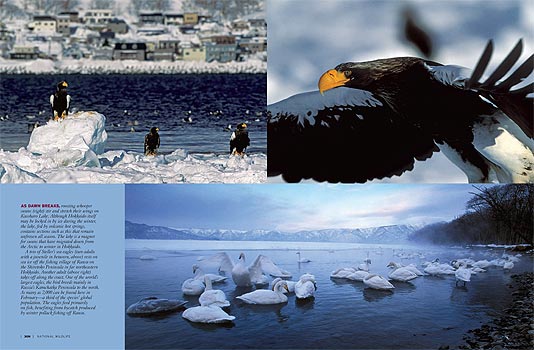 I had come to Hokkaido seeking a wilder side of Japan. Although I found the impressive winter gatherings of birds I had hoped for, my joy was tempered by the discovery that nearly all these populations depend on food provided by people. Even in these more sparsely populated northern reaches of the country, pristine ecosystems no longer exist. I decided to set my idealism aside, however, and enjoy the show. In Japan, wild lands filled with wildlife unaffected by humans may be a fantasy, but the beauty of nature is not.

Born in Japan, Tim Laman is a field biologist and wildlife photographer based at Harvard University’s Museum of Comparative Zoology.