Studying such malodorous mammals is tricky, but that hasn't stopped one resolute researcher from spending the past four years learning everything he can about them 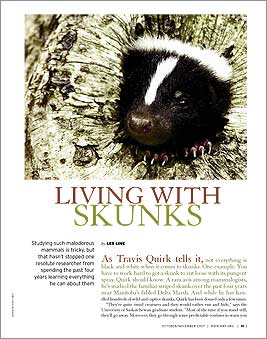 AS TRAVIS QUIRK tells it, not everything is black and white when it comes to skunks. One example: You have to work hard to get a skunk to cut loose with its pungent spray. Quirk should know. A rara avis among mammalogists, he's studied the familiar striped skunk over the past four years near Manitoba's fabled Delta Marsh. And while he has handled hundreds of wild and captive skunks, Quirk has been doused only a few times.

"They're quite timid creatures and they would rather run and hide," says the University of Saskatchewan graduate student. "Most of the time if you stand still, they'll go away. Moreover, they go through some predictable routines to warn you off before they spray." First, he relates, a skunk does a "handstand" with its tail erect. Next, it stomps its feet--loudly. If this doesn't work, the animal scratches the ground and shuffles backward.

"If you're still perceived as a threat," Quirk continues, "a skunk may charge. But it's only a bluff." The animal usually will stop 5 or 6 feet away and do the stomping and scratching bit again to encourage you to retreat. As a last measure, it will twist its body into a U-shape so the anus is pointed at the intruder. "That's where the spray comes from and this is your last chance to back off. Fast!"

Not surprisingly, working with such malodorous mammals wasn't in Quirk's plans when he was an undergraduate. But when a friend backed out of a research assistant's job on another skunk study because nighttime fieldwork made her claustrophobic, he volunteered to take her place. And Mephitus mephitus, aka the stinking polecat, has been a big part of his life ever since. 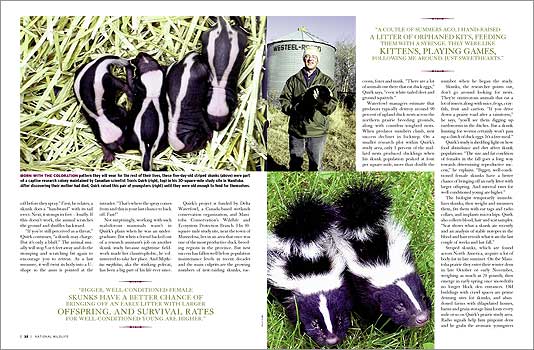 Quirk's project is funded by Delta Waterfowl, a Canada-based wetlands conservation organization, and Manitoba Conservation's Wildlife and Ecosystem Protection Branch. His 30-square-mile study site, near the town of Minnedosa, lies in an area that once was one of the most productive duck-breeding regions in the province. But nest success has fallen well below population maintenance levels in recent decades and the main culprits are the growing numbers of nest-raiding skunks, raccoons, foxes and mink. "There are a lot of animals out there that eat duck eggs," Quirk says, "even white-tailed deer and ground squirrels."

Waterfowl managers estimate that predators typically destroy around 90 percent of upland duck nests across the northern prairie breeding grounds, along with countless songbird nests. When predator numbers climb, nest success declines in lockstep. On a smaller research plot within Quirk's study area, only 1 percent of the mallard nests produced ducklings when his skunk population peaked at four per square mile, more than double the number when he began the study.

Skunks, the researcher points out, don't go around looking for nests. They're omnivorous animals that eat a lot of insects along with mice, frogs, crayfish, fruit and carrion. "If you drive down a prairie road after a rainstorm," he says, "you'll see them digging up earthworms in the ditches. But a skunk hunting for worms certainly won't pass up a clutch of duck eggs. It's a free meal."

Quirk's study is shedding light on how food abundance and diet affect skunk populations. "The size and fat condition of females in the fall goes a long way towards determining reproductive success," he explains. "Bigger, well-conditioned female skunks have a better chance of bringing off an early litter with larger offspring. And survival rates for well-conditioned young are higher."

The biologist temporarily immobilizes skunks, then weighs and measures them, fits them with ear tags and radio collars, and implants microchips. Quirk also collects blood, hair and scat samples. "Scat shows what a skunk ate recently and an analysis of stable isotopes in the blood and hair reveals what it ate the last couple of weeks and last fall." 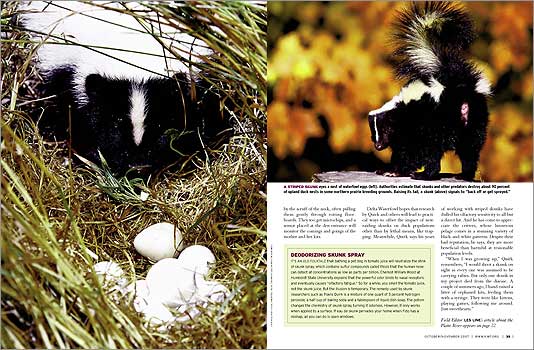 Striped skunks, which are found across North America, acquire a lot of body fat in late summer. On the Manitoba prairie they enter their winter dens in late October or early November, weighing as much as 20 pounds, then emerge in early spring once snowdrifts no longer block den entrances. Old buildings with crawl spaces are prime denning sites for skunks, and abandoned farms with dilapidated houses, barns and grain storage bins loom every mile or so on Quirk's prairie study area. Radio signals help him pinpoint dens and he grabs the aromatic youngsters by the scruff of the neck, often pulling them gently through rotting floorboards. They too get microchips, and a sensor placed at the den entrance will monitor the comings and goings of the mother and her kits.

Delta Waterfowl hopes that research by Quirk and others will lead to practical ways to offset the impact of nest-raiding skunks on duck populations other than by lethal means, like trapping. Meanwhile, Quirk says his years of working with striped skunks have dulled his olfactory sensitivity to all but a direct hit. And he has come to appreciate the critters, whose luxurious pelage comes in a stunning variety of black-and-white patterns. Despite their bad reputation, he says, they are more beneficial than harmful at reasonable population levels.

"When I was growing up," Quirk remembers, "I would shoot a skunk on sight as every one was assumed to be carrying rabies. But only one skunk in my project died from the disease. A couple of summers ago, I hand-raised a litter of orphaned kits, feeding them with a syringe. They were like kittens, playing games, following me around. Just sweethearts."

It's an old folktale that bathing a pet dog in tomato juice will neutralize the stink of skunk spray, which contains sulfur compounds called thiols that the human nose can detect at concentrations as low as parts per billion. Chemist William Wood at Humboldt State University explains that the powerful odor binds to nasal receptors and eventually causes "olfactory fatigue." So for a while, you smell the tomato juice, not the skunk juice. But the illusion is temporary. The remedy used by skunk researchers such as Travis Quirk is a mixture of one quart of 3 percent hydrogen peroxide, a half cup of baking soda and a tablespoon of liquid dish soap. The potion changes the chemistry of skunk spray, turning it odorless. However, it only works when applied to a surface. If eau de skunk pervades your home when Fido has a mishap, all you can do is open windows.