In a remote, uncharted mountain range on the island of New Guinea, intrepid biologists discover a duo of "missing" bird species as well as a host of new plants and animals 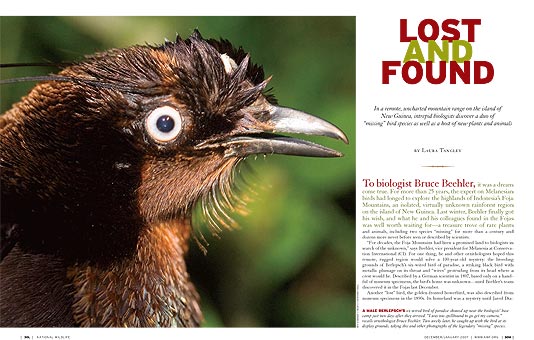 TO BIOLOGIST Bruce Beehler, it was a dream come true. For more than 25 years, the expert on Melanesian birds had longed to explore the highlands of Indonesia’s Foja Mountains, an isolated, virtually unknown rainforest region on the island of New Guinea. Last winter, Beehler finally got his wish, and what he and his colleagues found in the Fojas was well worth waiting for—a treasure trove of rare plants and animals, including two species “missing” for more than a century and dozens more never before seen or described by scientists.

“For decades, the Foja Mountains had been a promised land to biologists in search of the unknown,” says Beehler, vice president for Melanesia at Conservation International (CI). For one thing, he and other ornithologists hoped this remote, rugged region would solve a 100-year-old mystery: the breeding grounds of Berlepsch’s six-wired bird of paradise, a striking black bird with metallic plumage on its throat and “wires” protruding from its head where a crest would be. Described by a German scientist in 1897, based only on a handful of museum specimens, the bird’s home was unknown—until Beehler’s team discovered it in the Fojas last December.

Another “lost” bird, the golden-fronted bowerbird, was also described from museum specimens in the 1890s. Its homeland was a mystery until Jared Diamond, a University of California–Los Angeles scientist and Pulitzer Prize-winning author, caught sight of the bird on an expedition to the Fojas in 1981. (Before Beehler’s team, Diamond was the only Western scientist who had reached the region, despite dozens of attempts over eight decades.) Beehler and his colleagues became the first to take photos of the bowerbird. “Our hope was that there would be additional unknown species lurking in the forest that held the bowerbird and the bird of paradise,” he says.

After raising funds, the scientists’ first challenge was obtaining official permission to explore the Fojas, a request that the Indonesian government rarely grants to outsiders. According to Beehler, permits were required from four national departments (immigration, forestry, interior and the police) as well as several provincial and local authorities; getting them took nearly a decade. Reaching the highlands posed another problem. Because the base of the mountains is more than 25 miles from the nearest road—and climbing up from there would have required at least a week of hacking through dense, unmapped jungle—Beehler decided to charter a helicopter to ferry the group up to a small boggy clearing he had seen on a reconnaissance flight in 1987. The missionaries who owned the helicopter, however, could commit to two specific days only, one to drop off the scientists and another to pick them up two weeks later. “Given the uncertain weather conditions in western New Guinea, this was not very reassuring to us,” says Beehler. 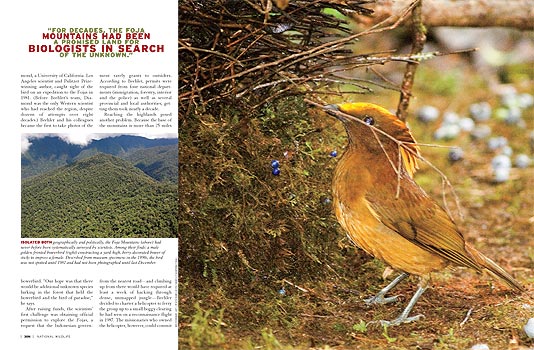 Once they did make it, the 14-member team of Indonesian, Australian and U.S. researchers did not have to wait long to be rewarded. Just two days after arriving, the biologists spotted a pair of Berlepsch’s six-wired birds of paradise engaged in a mating ritual not far from their base camp. “We stood in awe as the male romped about in the saplings, flicking his wings and white flank plumes, and whistling his sweet two-note song for the female,” recalls Beehler. “I was too spellbound to go get my camera.” (He later took several photos—the first ever—of both the male and female birds.) Two days later, they found and photographed the legendary golden-fronted bowerbird, a male displaying at his bower—a yard-high pile of twigs decorated with colorful berries—as his prospective mate looked on.

Still, for Beehler and his colleagues, the most exciting discoveries were the new species they found. The first occurred only minutes after climbing out of the helicopter, when they spied a chicken-like, red-faced and orange-wattled honeyeater bird that looked different from anything in their guidebooks. The bird turned out to be an unidentified species, the first new bird discovered on the island of New Guinea in more than 60 years.

In all, the researchers recorded a total of 1,015 plant and animal species during the month-long “rapid assessment program,” or RAP, expedition. Though their results are still being analyzed by taxonomists, and must eventually be published in peer-reviewed journals, dozens of these species are most likely new to science. They include, in addition to the honeyeater, 20 frogs, 4 butterflies and at least 10 plants. Beehler says scientists are sure to discover more species on a follow-up RAP expedition to the Fojas in 2007.

To some scientists, the team’s discoveries are not surprising. “New Guinea itself is an amazing island of biodiversity, most of it still undescribed,” says biologist Colin Poole, director of the Wildlife Conservation Society’s Asia Program. Poole adds that the Foja Mountains “represent a particularly unique area as far as its size and how untouched by humans it appears to be.”

Indeed, throughout the expedition, “We saw no signs of human civilization, either past or present,” says Beehler. Animals such as the long-beaked echidna, a rare egg-laying mammal, were so unwary that the researchers could simply reach down and pick them up. Proving the region has never been inhabited would be impossible, Beehler says, nor does it really matter. “What’s important is that the Fojas contain an expanse of nearly 2.5 million acres of tropical humid forest that is entirely undeveloped today,” he says. “This may be the largest essentially pristine forest in the entire Asia-Pacific region.” 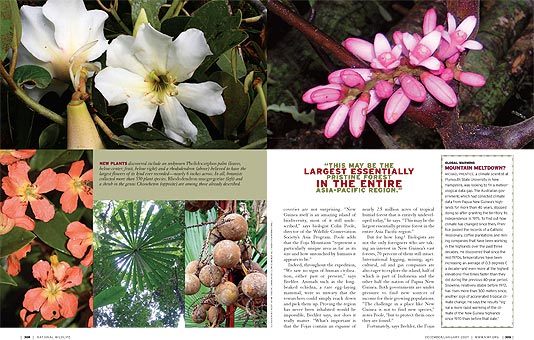 But for how long? Biologists are not the only foreigners who are taking an interest in New Guinea’s vast forests, 70 percent of them still intact. International logging, mining, agricultural, oil and gas companies are also eager to explore the island, half of which is part of Indonesia and the other half the nation of Papua New Guinea. Both governments are under pressure to find new sources of income for their growing populations. “The challenge in a place like New Guinea is not to find new species,” notes Poole, “but to protect them once they are found.”

Fortunately, says Beehler, the Fojas still house a small, relatively slow-growing number of residents whose livelihoods largely depend on healthy forests. The highlands also are part of a larger region, called the Mamberamo Raya Corridor, that is CI’s top conservation priority in Asia. With 13 staff members on the ground full time, the organization is helping local people find additional sources of income that do not harm the forests. They are also training leaders in skills for negotiating with international interests as well as with the Indonesian government. “In the short to medium term at least,” believes Beehler, “the Foja Mountains appear to be safe.”

In the longer term, however, global warming may pose a threat more formidable than gold mines, logging concessions or oil palm plantations. According to a recent study (see below), temperatures throughout New Guinea’s highlands are rising faster than they are in the lowlands—and faster than they were three decades ago. In addition, high-elevation glaciers, among the few left in tropical Asia, are receding surprisingly quickly. Both trends threaten to change the environment so dramatically it could become uninhabitable to species that have evolved over eons to live only in these mountainous forests.

According to Beehler, bowerbirds, birds of paradise and other Foja Mountain inhabitants are typical of high-altitude species worldwide. “If these creatures are confined to the top of a mountain range, they have nowhere to go as temperature and rainfall conditions change,” he says. “Over time, their habitat will simply disappear.”

Michael Prentice, a climate scientist at Plymouth State University in New Hampshire, was looking to fill a meteorological data gap. The Australian government, which had collected climate data from Papua New Guinea’s highlands for more than 40 years, stopped doing so after granting the territory its independence in 1975. To find out how climate has changed since then, Prentice pooled the records of a Catholic missionary, coffee plantations and mining companies that have been working in the highlands over the past three decades. He discovered that since the mid-1970s, temperatures have been increasing an average of 0.3 degrees C a decade—and even more at the highest elevations—five times faster than they did during the previous 40-year period. Snowline, relatively stable before 1972, has risen more than 300 meters since, another sign of accelerated tropical climate change. He says the results “signal a more rapid warming of the climate of the New Guinea highlands since 1970 than before that date.” 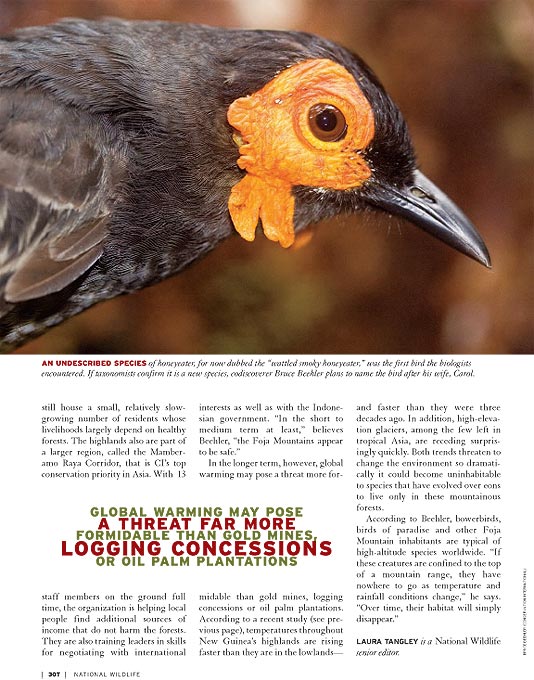