Found nowhere else on Earth, Borneo's remarkable proboscis monkey is being squeezed out by habitat loss 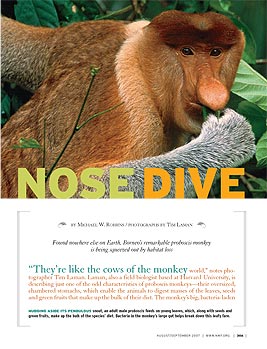 "THEY'RE LIKE THE COWS of the monkey world," notes photographer Tim Laman. Laman, also a field biologist based at Harvard University, is describing just one of the odd characteristics of Proboscis monkeys--their oversized, chambered stomachs, which enable the animals to digest masses of the leaves, seeds and green fruits that make up the bulk of their diet. The monkey's big, bacteria-laden stomach gives it a bulbous profile, much like a guy with a beer gut. It also accounts for the traditional Malay nickname for the species: monyet belanda, or "Dutchman monkey," a snide reference to the portly Dutch sailors who colonized Borneo.

Now shared by the nations of Brunei, Malaysia and Indonesia, the 290,000-square-mile island of Borneo is the Proboscis monkey's only native home. And even here, on the world's third largest island, the species survives only in highly specialized habitats: the treetops of riverine and coastal forests and mangrove swamps, ecosystems that are increasingly besieged by logging, agriculture and other threats.

"The forests all around the edges of Borneo have really been hammered," says John Robinson, senior vice president and director of international conservation for the New York-based Wildlife Conservation Society. "The result is a fragmented habitat and monkey colonies of 250 animals or less." The World Conservation Union classifies Nasalis larvatus as "endangered," meaning that this rare and distinctive creature faces "a very high risk of extinction in the wild in the immediate future." Biologists believe that only 3,000 to 8,000 of the monkeys remain on the island. 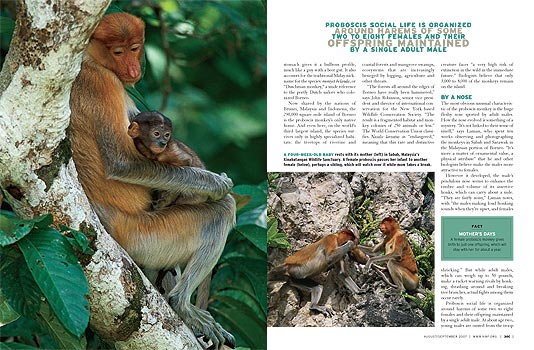 BY A NOSE
The most obvious unusual characteristic of the Proboscis monkey is the huge fleshy nose sported by adult males. How the nose evolved is something of a mystery. "It's not linked to their sense of smell," says Laman, who spent ten weeks observing and photographing the monkeys in Sabah and Sarawak in the Malaysian portion of Borneo. "It's more a matter of ornamental value, a physical attribute" that he and other biologists believe make the males more attractive to females.

However it developed, the male's pendulous nose seems to enhance the timbre and volume of its assertive honks, which can carry about a mile. "They are fairly noisy," Laman notes, with "the males making loud honking sounds when they're upset, and females shrieking." But while adult males, which can weigh up to 50 pounds, make a racket warning rivals by honking, thrashing around and breaking tree branches, actual fights among them occur rarely. 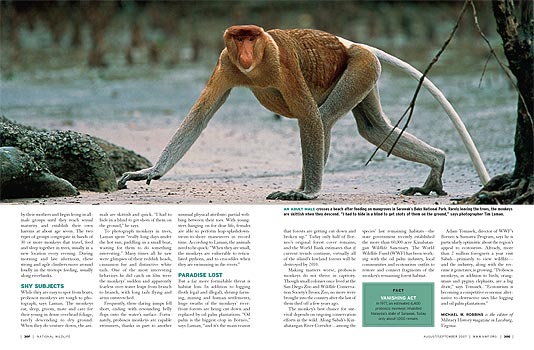 Proboscis social life is organized around harems of some two to eight females and their offspring maintained by a single adult male. At about age two, young males are ousted from the troop by their mothers and begin living in all-male groups until they reach sexual maturity and establish their own harems at about age seven. The two types of groups congregate in bands of 30 or more monkeys that travel, feed and sleep together in trees, usually in a new location every evening. During morning and late afternoon, these strong and agile climbers move around loudly in the treetops feeding, usually along riverbanks. 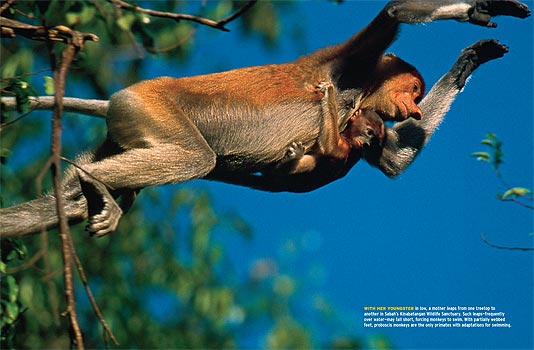 SHY SUBJECTS
While they are easy to spot from boats, Proboscis monkeys are tough to photograph, says Laman. The monkeys eat, sleep, groom, mate and care for their young in dense overhead foliage, rarely descending to dry ground. When they do venture down, the animals are skittish and quick. "I had to hide in a blind to get shots of them on the ground," he says.

To photograph monkeys in trees, Laman spent "really long days under the hot sun, paddling in a small boat, waiting for them to do something interesting." Many times all he saw were glimpses of their reddish heads, cinnamon fur and distinctive white tails. One of the most interesting behaviors he did catch on film were the monkeys' sudden and apparently fearless over-water leaps from branch to branch, with long tails flying and arms outstretched.

Frequently, these daring jumps fell short, ending with resounding belly flops onto the water's surface. Fortunately, Proboscis monkeys are capable swimmers, thanks in part to another unusual physical attribute: partial webbing between their toes. With youngsters hanging on for dear life, females are able to perform leap-splashdown-swim-to-shore maneuvers in record time. According to Laman, the animals need to be quick: "When they are small, the monkeys are vulnerable to reticulated pythons, and to crocodiles when they are swimming in the rivers."

PARADISE LOST
But a far more formidable threat is habitat loss. In addition to logging (both legal and illegal), shrimp farming, mining and human settlements, huge swaths of the monkeys' riverfront forests are being cut down and replaced by oil palm plantations. "Oil palm is the biggest crop in Borneo," says Laman, "and it's the main reason that forests are getting cut down and broken up." Today only half of Borneo's original forest cover remains, and the World Bank estimates that if current trends continue, virtually all of the island's lowland forests will be destroyed by 2010.

Making matters worse, Proboscis monkeys do not thrive in captivity. Though small colonies once lived at the San Diego Zoo and Wildlife Conservation Society's Bronx Zoo, no more were brought into the country after the last of them died off a few years ago. The monkey's best chance for survival depends on ongoing conservation efforts in the wild. Along Sabah's Kinabatangan River Corridor—among the species' last remaining habitats—the state government recently established the more than 60,000-acre Kinabatangan Wildlife Sanctuary. The World Wildlife Fund (WWF) has been working with the oil palm industry, local communities and ecotourism outfits to restore and connect fragments of the monkey's remaining forest habitat.

Adam Tomasek, director of WWF's Borneo & Sumatra Program, says he is particularly optimistic about the region's appeal to ecotourists. Already, more than 2 million foreigners a year visit Sabah—primarily to view wildlife—and the industry, along with the revenue it generates, is growing. "Proboscis monkeys, in addition to birds, orangutans and pygmy elephants, are a big draw," says Tomasek. "Ecotourism is becoming a competitive economic alternative to destructive uses like logging and oil palm plantations."

Michael W. Robbins is the editor of Military History magazine in Leesburg, Virginia.