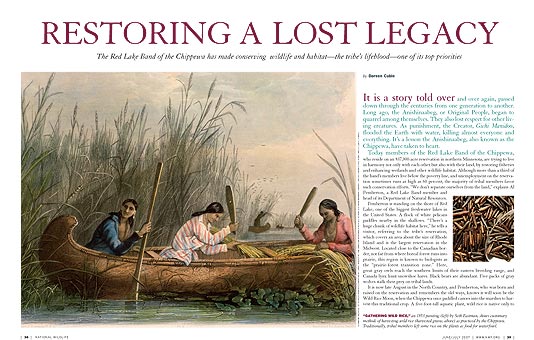 It is a story told over and over again, passed down through the centuries from one generation to another. Long ago, the Anishinaabeg, or Original People, began to quarrel among themselves. They also lost respect for other living creatures. As punishment, the Creator, Gichi Manidoo, flooded the Earth with water, killing almost everyone and everything. It's a lesson the Anishinaabeg, also known as the Chippewa, have taken to heart.

Today members of the Red Lake Band of the Chippewa, who reside on an 837,000-acre reservation in northern Minnesota, are trying to live in harmony not only with each other but also with their land, by restoring fisheries and enhancing wetlands and other wildlife habitat. Although more than a third of the band's members live below the poverty line, and unemployment on the reservation sometimes runs as high as 60 percent, the majority of tribal members favor such conservation efforts. "We don't separate ourselves from the land," explains Al Pemberton, a Red Lake Band member and head of its Department of Natural Resources.

Pemberton is standing on the shore of Red Lake, one of the biggest freshwater lakes in the United States. A flock of white pelicans paddles nearby in the shallows. "There's a huge chunk of wildlife habitat here," he tells a visitor, referring to the tribe's reservation, which covers an area about the size of Rhode Island and is the largest reservation in the Midwest. Located close to the Canadian border, not far from where boreal forest runs into prairie, this region is known to biologists as the "prairie-forest transition zone." Here, great gray owls reach the southern limits of their eastern breeding range, and Canada lynx hunt snowshoe hares. Black bears are abundant. Five packs of gray wolves stalk their prey on tribal lands.

It is now late August in the North Country, and Pemberton, who was born and raised on the reservation and remembers the old ways, knows it will soon be the Wild Rice Moon, when the Chippewa once paddled canoes into the marshes to harvest this traditional crop. A five-foot-tall aquatic plant, wild rice is native only to North America. Besides being a staple food of the Chippewa, the plant has long played an important role in the tribe's culture and religious ceremonies. 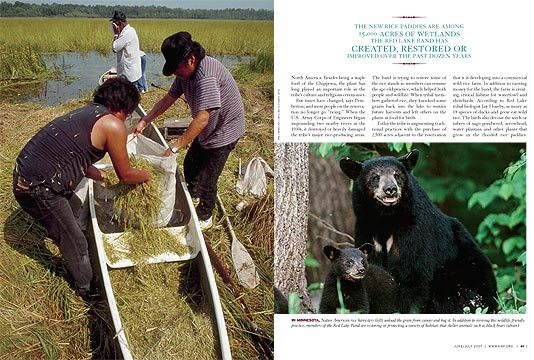 But times have changed, says Pemberton, and most people on the reservation no longer go "ricing." When the U.S. Army Corps of Engineers began impounding two nearby rivers in the 1930s, it destroyed or heavily damaged the tribe's major rice-producing areas. The band is trying to restore some of the rice stands so members can resume the age-old practice, which helped both people and wildlife: When tribal members gathered rice, they knocked some grains back into the lake to sustain future harvests and left others on the plants as food for birds.

Today the tribe is augmenting traditional practices with the purchase of 2,500 acres adjacent to the reservation that it is developing into a commercial wild rice farm. In addition to earning money for the band, the farm is creating critical habitat for waterfowl and shorebirds. According to Red Lake tribal biologist Jay Huseby, as many as 18 species of ducks and geese eat wild rice. The birds also devour the seeds or tubers of sago pondweed, arrowhead, water plantain and other plants that grow in the flooded rice paddies. When the paddies are drained in late summer—to allow combines to collect the grain—the resulting mudflats provide stopover areas for migrating godwits, yellowlegs, phalaropes and other shorebirds. 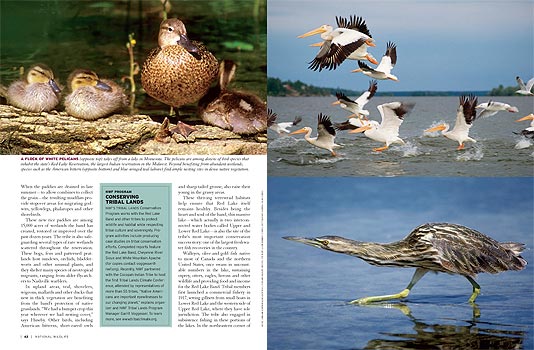 These new rice paddies are among 15,000 acres of wetlands the band has created, restored or improved over the past dozen years. The tribe is also safeguarding several types of rare wetlands scattered throughout the reservation. These bogs, fens and patterned peatlands host sundews, orchids, bladderworts and other unusual plants, and they shelter many species of neotropical migrants, ranging from alder flycatchers to Nashville warblers.

In upland areas, teal, shovelers, wigeons, mallards and other ducks that nest in thick vegetation are benefiting from the band's protection of native grasslands. "We had a bumper crop this year wherever we had nesting cover," says Huseby. Other birds, including American bitterns, short-eared owls and sharp-tailed grouse, also raise their young in the grassy areas. These thriving terrestrial habitats help ensure that Red Lake itself remains healthy. Besides being the heart and soul of the band, this massive lake—which actually is two interconnected water bodies called Upper and Lower Red Lake—is also the site of the tribe's most important conservation success story: one of the largest freshwater fish recoveries in the country.

Walleyes, olive-and-gold fish native to most of Canada and the northern United States, once swam in uncountable numbers in the lake, sustaining osprey, otters, eagles, herons and other wildlife and providing food and income for the Red Lake Band. Tribal members first launched a commercial fishery in 1917, setting gillnets from small boats in Lower Red Lake and the western side of Upper Red Lake, where they have sole jurisdiction. The tribe also engaged in subsistence fishing in these portions of the lakes. In the northeastern corner of Upper Red Lake, under the jurisdiction of the state of Minnesota, walleye sportfishing by the general public flourished.

Eventually, however, people began taking more fish than the lakes could provide. In 1989, the commercial harvest by the tribe was 950,000 pounds of walleye. By 1996, they caught only 15,000 pounds. "Clearly there were problems," says Pemberton. "In 1997, at the annual meeting before the season started, the fishermen brought up the idea of suspending the season." Even though fishing was a mainstay of its economy, the band decided to give the walleye time to recover. 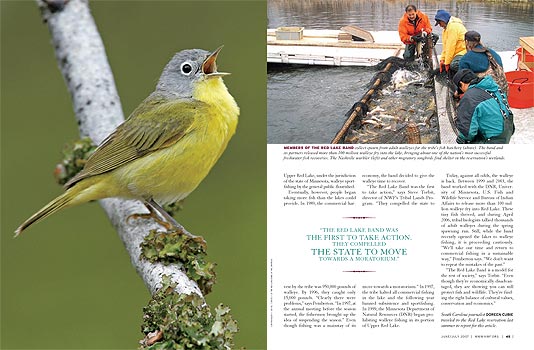 "The Red Lake Band was the first to take action," says Steve Torbit, director of NWF's Tribal Lands Program. "They compelled the state to move towards a moratorium." In 1997, the tribe halted all commercial fishing in the lake and the following year banned subsistence and sportfishing. In 1999, the Minnesota Department of Natural Resources (DNR) began prohibiting walleye fishing in its portion of Upper Red Lake.

Today, against all odds, the walleye is back. Between 1999 and 2003, the band worked with the DNR, University of Minnesota, U.S. Fish and Wildlife Service and Bureau of Indian Affairs to release more than 100 million walleye fry into Red Lake. These tiny fish thrived, and during April 2006, tribal biologists tallied thousands of adult walleyes during the spring spawning run. Still, while the band recently opened the lakes to walleye fishing, it is proceeding cautiously. "We'll take our time and return to commercial fishing in a sustainable way," Pemberton says. "We don't want to repeat the mistakes of the past."

"The Red Lake Band is a model for the rest of society," says Torbit. "Even though they're economically disadvantaged, they are showing you can still protect fish and wildlife. They're finding the right balance of cultural values, conservation and economics."