Romanias Wolves In the Crosshairs of Conflict 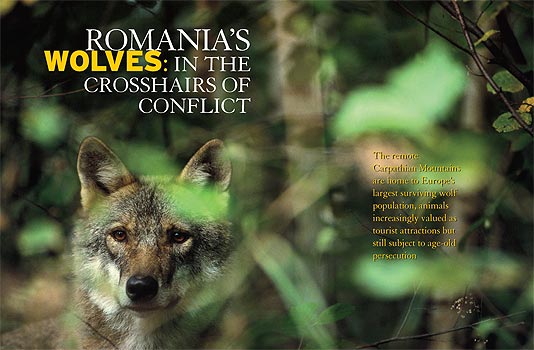 THE CARPATHIAN MOUNTAINS, forest-clad peaks that undulate into a soft, bluish horizon, compose Europe's largest mountain chain, sprawling across eight international borders. The chain's biggest and most impressive expanse of untrammeled wilderness lies in Romania, and there, despite conflicts with farmers and shepherds, lives Europe's largest gray wolf population. Sharing habitat with brown bears, lynx and wild boars, wolves number at least 2,500 in Romania and perhaps as many as 4,000.

Romanian gray wolves are impressive beasts. Though smaller than their northern cousins in Russia, they still can measure up to 4.5 feet long and weigh around 130 pounds. "Romania is unique in Europe in that we have high numbers of large carnivores, more than in any other country outside Russia," says Ovidiu Ionescu, a wolf biologist with Romania's Forest and Wildlife Research Institute. The nation's wolf population accounts for about 30 percent of the total in Europe. Romania also harbors Europe's largest population of brown bears, some 5,500 animals, as well 1,200 lynx, Central Europe's only viable population of the increasingly rare cat.

Such healthy populations of large carnivores provide both opportunities and problems for conservationists and wildlife managers. Biologist Christoph Promberger, an ecotourism promoter formerly with the Carpathian Large Carnivore Project, a program managed by the World Wildlife Fund, the Munich Wildlife Society and local authorities, thinks that the wolf could be a tourist draw. "This is the last place in Europe where you can see large predators regularly, including wolves," he says. "They are beginning to draw in ecotourists and others who want a wildlife experience." On the other hand, Romania is home to an ancient tradition of killing wolves to protect livestock, a practice that continues but that is diminishing, Ionescu says, as Romanians become more accepting of large predators.

Tall and lanky, with piercing bright eyes reminiscent of the animals he loves, Ionescu has been working with wolves since his university days, some two decades ago. He lives in Brasov, a medium-sized town about 100 miles due north of Bucharest, Romania's crowded capital. He shares his house, a sprawling affair on the outskirts, with two full-blooded pet wolves he raised from pups. 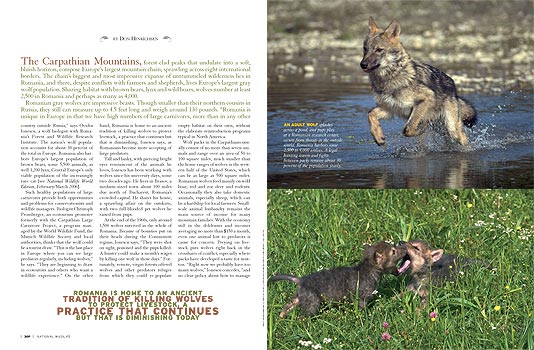 At the end of the 1960s, only around 1,500 wolves survived in the whole of Romania. Because of bounties put on their heads during the Communist regime, Ionescu says, "They were shot on sight, poisoned and the pups killed. A hunter could make a month's wages by killing one wolf in those days." Fortunately, remote, virgin forests offered wolves and other predators refuges from which they could re-populate empty habitat on their own, without the elaborate reintroduction programs typical in North America.

Wolf packs in the Carpathians usually consist of no more than seven animals and range over an area of 50 to 100 square miles, much smaller than the home ranges of wolves in the western half of the United States, which can be as large as 500 square miles. Romanian wolves feed mainly on wild boar, red and roe deer and rodents. Occasionally they also take domestic animals, especially sheep, which can be a hardship for local farmers. Small-scale animal husbandry remains the main source of income for many mountain families. With the economy still in the doldrums and incomes averaging no more than $150 a month, even one animal lost to predators is cause for concern. Preying on livestock puts wolves right back in the crosshairs of conflict, especially where packs have developed a taste for mutton. "Right now we probably have too many wolves," Ionescu concedes, "and no clear policy about how to manage problem packs. Our ideal population is probably somewhere around 2,500." 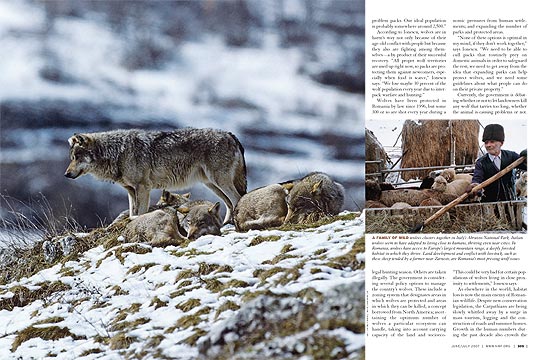 According to Ionescu, wolves are in harm's way not only because of their age-old conflict with people but because they also are fighting among themselves—a by-product of their successful recovery. "All proper wolf territories are used up right now, so packs are protecting them against newcomers, especially when food is scarce," Ionescu says. "We lose maybe 30 percent of the wolf population every year due to interpack warfare and hunting."

Wolves have been protected in Romania by law since 1996, but some 300 or so are shot every year during a legal hunting season. Others are taken illegally. The government is considering several policy options to manage the country's wolves. These include a zoning system that designates areas in which wolves are protected and areas in which they can be killed, a concept borrowed from North America; ascertaining the optimum number of wolves a particular ecosystem can handle, taking into account carrying capacity of the land and socioeconomic pressures from human settlements; and expanding the number of parks and protected areas.

"None of these options is optimal in my mind, if they don't work together," says Ionescu. "We need to be able to cull packs that routinely prey on domestic animals in order to safeguard the rest, we need to get away from the idea that expanding parks can help protect wolves, and we need some guidelines about what people can do on their private property."

Currently, the government is debating whether or not to let landowners kill any wolf that tarries too long, whether the animal is causing problems or not. "This could be very bad for certain populations of wolves living in close proximity to settlements," Ionescu says.

As elsewhere in the world, habitat loss is now the main enemy of Romanian wildlife. Despite new conservation legislation, the Carpathians are being slowly whittled away by a surge in mass tourism, logging and the construction of roads and summer homes. Growth in the human numbers during the past decade also crowds the animals. Some 5 million people live and work in the Carpathians, with more coming every year. Increasingly, Romania's wolves are coming into more contact with human populations. "This is why we have some conservationists who want more protected areas," Ionescu says. But making large swaths of the Carpathians off-limits to development is not likely to happen, given settlement patterns and the rash of development in recent years. The trick now is to manage wolves outside protected areas, and that takes the cooperation of local communities.

Fortunately for those who want to protect wolves, Romanians are changing their perceptions of large predators. Wolves in particular are seen increasingly as assets, especially for the nation's booming ecotourism industry, which is expanding rapidly. Wildlife is beginning to pay its way and has the potential to be a major economic factor in local development.

Christoph Promberger is optimistic about the wolf's future. Now running an ecotourism operation in Romania, he recalls that when he first moved there in the early 1990s, prejudice against wolves was commonplace. "Many people felt they were living in the Middle Ages, because we had so many wolves running around," he says. "They thought we had to solve this problem in order to join the West. Now this has changed dramatically. People now see wolves and bears as a valuable natural heritage that the West European countries have lost."

Is Kazakhstan Home to the World's Largest Wolf Population?

Kazakhstan--a sparsely populated, semidesert country of slightly more than 1 million square miles--probably has more wolves than any nation in the world, as many as 90,000, versus some 60,000 for Canada, which is three and a half times larger.

In Soviet days, some 1,000 professional hunters killed thousands of the wolves yearly to collect government bounties. In 1988, just before the Soviet economy collapsed, the hunters killed 16,000 wolves. But since then, wolf hunting has not been profitable in Kazakhstan; only about 2,000 wolves are killed yearly for a $40 bounty, and the animal's numbers have risen sharply. At the same time, poachers have reduced the Kazakhstan wolf's main prey species, the saiga antelope, from 1.5 million to perhaps 150,000, selling horns to the Chinese, who use it in traditional medicine.

The great number of saiga accounted for the large number of wolves in Kazakhstan. Now, after the antelope's decline, says Gaziz Dusenbayev, a 27-year-old farmer, "Every winter, the wolves come down from the hills and attack our cattle. This year, I have given three sheep to the wolves. That's worth $200, and for me that's a lot of money." In the spring, they go back to the remote, lightly wooded Amangeldy Hills to reproduce and feed on small mammals.

But the Kazakhs, who admire wolves for their cunning and courage, bear them no grudge. A tour of an area where many wolf attacks have been reported found everyone horrified at the suggestion that perhaps the wolf should be eradicated as it was in the United States and Western Europe. "There are just too many, that's all," said Galina Yakovna, who had watched helplessly as a pair of wolves recently snatched her favorite dog from her yard. "But they are part of nature."--Christopher Pala