Saving the Parrot for the Trees 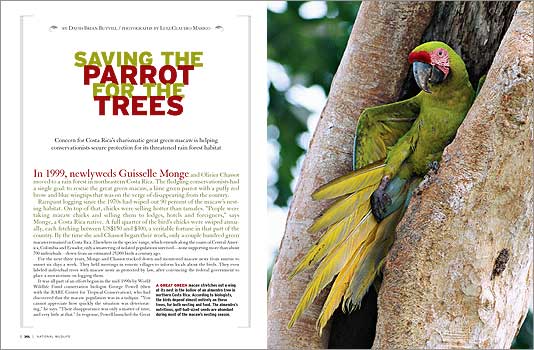 IN 1999, NEWLYWEDS Guisselle Monge and Olivier Chassot moved to a rain forest in northeastern Costa Rica. The fledgling conservationists had a single goal: to rescue the great green macaw, a lime green parrot with a puffy red brow and blue wingtips that was on the verge of disappearing from the country.

Rampant logging since the 1970s had wiped out 90 percent of the macaw’s nesting habitat. On top of that, chicks were selling hotter than tamales. “People were taking macaw chicks and selling them to lodges, hotels and foreigners,” says Monge, a Costa Rica native. A full quarter of the bird’s chicks were swiped annually, each fetching between US$150 and $300, a veritable fortune in that part of the country. By the time she and Chassot began their work, only a couple hundred green macaws remained in Costa Rica. Elsewhere in the species’ range, which extends along the coasts of Central America, Colombia and Ecuador, only a smattering of isolated populations survived—none supporting more than about 700 individuals—down from an estimated 25,000 birds a century ago.

For the next three years, Monge and Chassot tracked down and monitored macaw nests from sunrise to sunset six days a week. They held meetings in remote villages to inform locals about the birds. They even labeled individual trees with macaw nests as protected by law, after convincing the federal government to place a moratorium on logging them.

It was all part of an effort begun in the mid-1990s by World Wildlife Fund conservation biologist George Powell (then with the RARE Center for Tropical Conservation), who had discovered that the macaw population was in a tailspin. “You cannot appreciate how quickly the situation was deteriorating,” he says. “Their disappearance was only a matter of time, and very little at that.” In response, Powell launched the Great Green Macaw Research and Conservation Project, and immediately began working out the bird’s biology, needs and threats. In 1998, he called in Monge and Chassot, now codirectors of the project, to turn the science into conservation. 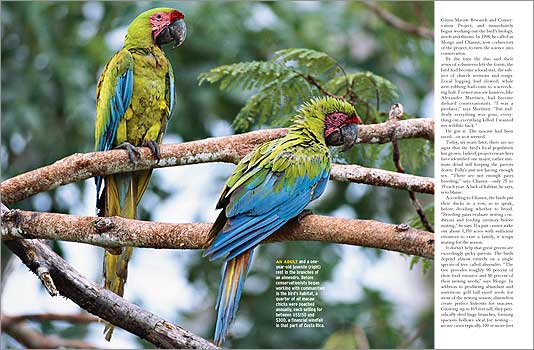 By the time the duo and their army of volunteers left the forest, the bird had become a local star, the subject of church sermons and songs. Local logging had slowed, while nest-robbing had come to a screeching halt. Former macaw hunters, like Alexander Martínez, had become diehard conservationists. “I was a predator,” says Martínez. “But suddenly everything was gone, everything cut, everything killed. I wanted my wildlife back.”

He got it. The macaw had been saved—or so it seemed. Today, six years later, there are no signs that the bird’s local population has grown. Indeed, project researchers have identified one major, rather intimate detail still keeping the parrots down: Polly’s just not having enough sex. “There are not enough pairs breeding,” says Chassot—only 25 to 35 each year. A lack of habitat, he says, is to blame.

According to Chassot, the birds put their ducks in a row, so to speak, before deciding whether to breed. “Breeding pairs evaluate nesting conditions and feeding territory before mating,” he says. If a pair cannot stake out about 1,350 acres with sufficient resources to raise a family, it scraps mating for the season.

It doesn’t help that great greens are exceedingly picky parrots. The birds depend almost entirely on a single species of tree called almendro. “The tree provides roughly 90 percent of their food resource and 80 percent of their nesting needs,” says Monge. In addition to producing abundant and nutritious golf-ball-sized seeds for most of the nesting season, almendros create perfect hideouts for macaws. Growing up to 165 feet tall, they periodically shed huge branches, forming spacious hollows ideal for nesting—secure caves typically 100 or more feet above the ground that keep helpless chicks away from earthbound predators. Smaller pockets collect rainwater and serve as convenient watering holes for the birds. It takes decades for the trees to develop these qualities that are so critical to macaws.

Almendro is one of the hardest woods known. Indeed, it is only because they were too tough for saws and mills at the time that any of the trees—and Costa Rica’s great green macaws—survived the logging boom of the 1970s and early 1980s. Throughout the region, almendros were left standing in clear-cuts, like silos towering above fields of stubble. Chassot calls these lone trees “small islands in a sea of inhospitable environment.” Fill in the gaps with more almendros, he says, and more macaws will breed—the final step to securing the species’ future.

So now Monge and Chassot are using the parrot they made popular to help save the almendro (which became a high-demand luxury wood when improved technology made harvesting feasible)—and along with it, the region’s rain forest habitat. In 2005, after years of pressure from project participants and an alliance of 20 local and international organizations, Costa Rica’s government established the 150,000-acre Maquenque National Wildlife Refuge to protect the macaw. Monge, Chassot and their colleagues are working to get the refuge consolidated with other protected areas. Their ultimate goal is to connect six existing parks in northern Costa Rica and southern Nicaragua, uniting a whopping 3 million acres that are home to dozens of endangered species including manatees and jaguars.

Maquenque’s pioneering design prohibits human access to the macaw’s core almendro, but also fosters ecological restoration in bordering areas by helping private landowners reforest their properties and paying them to keep the recovering forests. The trees include almendro but also fast-growing species with high lumber value that not only provide habitat and food for wildlife but can be selectively harvested down the road. In addition, locals are being trained in tour guiding, wildlife identification and launching ecotourism ventures. A several-mile-long birding route, slated to open in January 2008, will provide remote communities with a steady trickle of tourists eager for authentic foods, crafts and, of course, a chance to spot a great green macaw in the wild.

With such a promising plan in place, and backed by local enthusiasm, it’s tempting to declare the macaw conservation project a success. But Powell’s not throwing a welcome-back party just yet. “The patient has been stabilized—though is still perhaps in critical condition,” he says.

One potential roadblock is that throughout Central America, national parks that shine on paper are plagued by illegal logging and other problems that Chassot attributes to a general “lack of money, personnel and respect towards laws.” Maquenque is much too young to assess, but as a refuge will receive less federal attention than a national park. Currently, only two rangers patrol the refuge. And the funds that fuel the conservation plan—primarily small grants from nonprofit organizations—are at perpetual risk of drying up.

The great green macaw’s future may be far from certain, but one thing is crystal clear: Monge, Chassot and the rest of Costa Rica’s macaw musketeers will not rest until the country’s rain forest canopies are a brighter shade of green.