Singing in the Brain

In contrast to most animals, songbirds--like humans--learn the vocalizations they make; studying how they do it may shed light on how people learn to speak 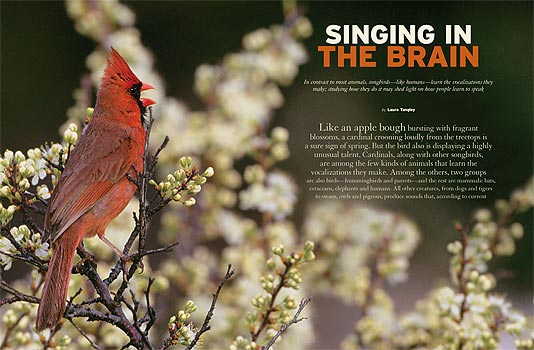 LIKE AN APPLE BOUGH bursting with fragrant blossoms, a cardinal crooning loudly from the treetops is a sure sign of spring. But the bird also is displaying a highly unusual talent. Cardinals, along with other songbirds, are among the few kinds of animals that learn the vocalizations they make. Among the others, two groups are also birds—hummingbirds and parrots—and the rest are mammals: bats, cetaceans, elephants and humans. All other creatures, from dogs and tigers to swans, owls and pigeons, produce sounds that, according to current research, are programmed by the species’ genes. “Not even the chimpanzee, our closest living relative, is a vocal learner,” says Erich Jarvis, a Duke University Medical Center neurobiologist who studies the trait.

According to Jarvis and other scientists, baby songbirds learn to sing much like human infants learn to speak. Both begin by listening to their parents or other adults and memorizing the sounds. The next step is to mimic the mentors, slowly perfecting their “language” over time through practice. “I love hearing the similarities between a babbling baby bird and a babbling baby human,” says biologist Donald Kroodsma, a retired professor at the University of Massachusetts and author of the book The Singing Life of Birds. “Each takes bits and pieces of the sounds adults produce, repeating them in completely random sequences until the proper vocalization takes shape.”

Like a French child raised by English-speaking parents, a young songbird raised by a different species of adult, or with recordings of a different species, will end up learning the “wrong” song—and will produce only an odd, improvised tune if it is raised in isolation. A vocal nonlearner such as a phoebe or a dove, on the other hand, will sing its species’ correct song even if it’s brought up by another kind of bird, or by none at all. 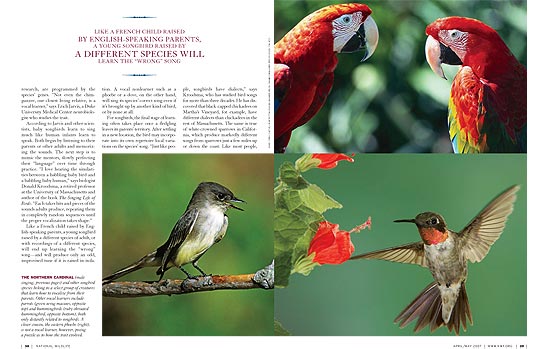 For songbirds, the final stage of learning often takes place once a fledgling leaves its parents’ territory. After settling in a new location, the bird may incorporate into its own repertoire local variations on the species’ song. “Just like people, songbirds have dialects,” says Kroodsma, who has studied bird songs for more than three decades. He has discovered that black-capped chickadees on Martha’s Vineyard, for example, have different dialects than chickadees in the rest of Massachusetts. The same is true of white-crowned sparrows in California, which produce markedly different songs from sparrows just a few miles up or down the coast. Like most people, who after adolescence have difficulty learning foreign languages, most songbirds lose the ability to learn new melodies after they reach maturity. A handful of species, however—including mynas, mockingbirds and starlings—are able to pick up new tunes throughout their lives.

Bird Brains
A few years ago, Jarvis and his colleagues made the surprising discovery that when a songbird, parrot or hummingbird is producing its learned vocalization, a set of seven similar structures in the birds’ brains become active. The finding was unexpected because the three avian groups are only distantly related to one another. At the same time, they are closely related to other birds that are not vocal learners. Flycatchers, for example, belong to the same order as songbirds—Passeriformes—yet no flycatcher species tested so far displays the trait.

One possible explanation, says Jarvis, is that the three groups of vocal learning birds had a common ancestor that possessed the skill. “But this means there would have been multiple losses of the ability over time, a sort of mass extinction of vocal learning,” he says. Another hypothesis is that vocal learners evolved similar brain structures independently over the last 65 million years, much the same way that birds and bats separately evolved wings that turned out to be so much alike.

Discoveries about the human brain support this latter hypothesis. Scientists conducting imaging studies have found that when people speak, parts of their brains’ cerebrums that are similar to those of vocalizing songbirds, parrots and hummingbirds become active. They’ve also found that the same neural pathways are damaged in people who have lost the ability to speak due to injury or stroke. Jarvis now believes that vocal learning most likely developed independently in humans and the three bird groups (as well as in other learners whose brains have not been studied)—yet it arose from a preexisting brain system, probably shared by all vertebrates, that controls learning to move. 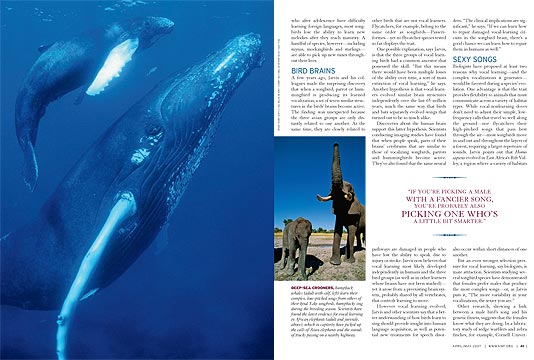 However vocal learning evolved, Jarvis and other scientists say that a better understanding of how birds learn to sing should provide insight into human language acquisition, as well as potential new treatments for speech disorders. “The clinical implications are significant,” he says. “If we can learn how to repair damaged vocal-learning circuits in the songbird brain, there’s a good chance we can learn how to repair them in humans as well.”

Sexy Songs
Biologists have proposed at least two reasons why vocal learning—and the complex vocalizations it generates—would be favored during a species’ evolution. One advantage is that the trait provides flexibility to animals that must communicate across a variety of habitat types. While vocal-nonlearning doves don’t need to adjust their simple, low-frequency calls that travel so well along the ground—nor flycatchers their high-pitched songs that pass best through the air—most songbirds move in and out and throughout the layers of a forest, requiring a larger repertoire of sounds. Jarvis points out that Homo sapiens evolved in East Africa’s Rift Valley, a region where a variety of habitats also occur within short distances of one another.

But an even stronger selection pressure for vocal learning, say biologists, is mate attraction. Scientists studying several songbird species have demonstrated that females prefer males that produce the most complex songs—or, as Jarvis puts it, “The more variability in your vocalizations, the sexier you are.”

Other research, showing a link between a male bird’s song and his genetic fitness, suggests that the females know what they are doing. In a laboratory study of sedge warblers and zebra finches, for example, Cornell University psychologist and neurobiologist Timothy DeVoogd discovered that a male’s superior singing skills correlate with larger brain structures—and that among zebra finches, these bigger brains are inherited by the birds’ sons. “If you’re picking a male with a fancier song,” says DeVoogd, “you’re probably also picking one who’s a little bit smarter.”

In another study, Duke biologist Stephen Nowicki tested the response of female song sparrows to captive males whose abilities to accurately copy the songs of wild birds varied. As expected, he observed that females favored males that more accurately copied wild-type songs. But more significantly, Nowicki also discovered that birds with inferior songs had experienced stress early in life, which he suggests may have hampered brain development. 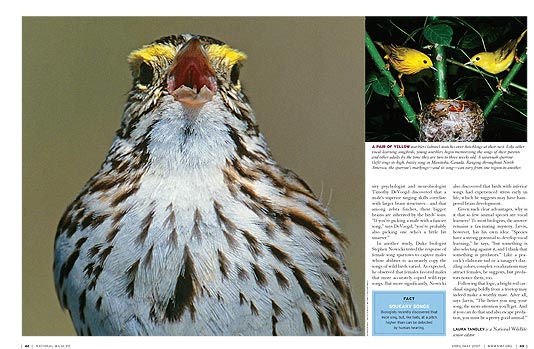 Given such clear advantages, why is it that so few animal species are vocal learners? To most biologists, the answer remains a fascinating mystery. Jarvis, however, has his own idea: “Species have a strong potential to develop vocal learning,” he says, “but something is also selecting against it, and I think that something is predators.” Like a peacock’s elaborate tail or a tanager’s dazzling colors, complex vocalizations may attract females, he suggests, but predators notice them, too.

Following that logic, a bright red cardinal singing boldly from a treetop may indeed make a worthy mate. After all, says Jarvis, “The better you sing your song, the more attention you’ll get. And if you can do that and also escape predation, you must be a pretty good animal.”