Just off the coast of Australia, Rottnest Island is the last safe haven for a diminutive kangaroo whose fate mirrors that of many of the continent's native marsupials 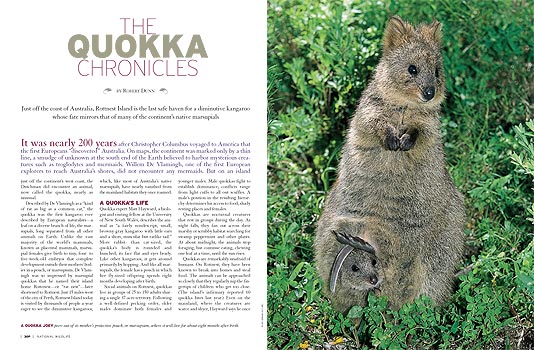 IT WAS NEARLY 200 years after Christopher Columbus voyaged to America that the first Europeans "discovered" Australia. On maps, the continent was marked only by a thin line, a smudge of unknown at the south end of the Earth believed to harbor mysterious creatures such as troglodytes and mermaids. Willem De Vlamingh, one of the first European explorers to reach Australia's shores, did not find any mermaids. But on an island just off the continent's west coast, the Dutchman did encounter an animal, now called the quokka, nearly as unusual.

Described by De Vlamingh as a "kind of rat as big as a common cat," the quokka was the first kangaroo ever described by European naturalists--a leaf on a diverse branch of life, the marsupials, long separated from all other animals on Earth. Unlike the vast majority of the world's mammals, known as placental mammals, marsupial females give birth to tiny, four- to five-week-old embryos that complete development outside their mothers' bodies in a pouch, or marsupium. De Vlamingh was so impressed by marsupial quokkas that he named their island home Rottenest--or "rat nest"--later shortened to Rottnest. Just 15 miles west of the city of Perth, Rottnest Island today is visited by thousands of people a year eager to see the diminutive kangaroos, which, like most of Australia's native marsupials, have nearly vanished from the mainland habitats they once roamed.

A Quokka's Life
Quokka expert Matt Hayward, a biologist and visiting fellow at the University of New South Wales, describes the animal as "a fairly nondescript, small, browny-gray kangaroo with little ears and a short, muscular but ratlike tail." More rabbit- than cat-sized, the quokka's body is rounded and hunched, its face flat and eyes beady. Like other kangaroos, it gets around primarily by hopping. And like all marsupials, the female has a pouch in which her fly-sized offspring spends eight months developing after birth. 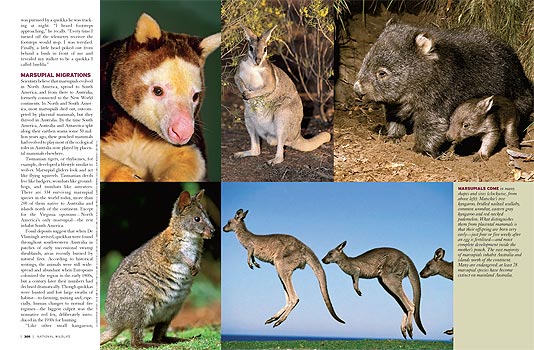 Social animals on Rottnest, quokkas live in groups of 25 to 150 adults sharing a roughly 40-acre territory. Following a well-defined pecking order, older males dominate both females and younger males. Male quokkas fight to establish dominance; conflicts range from light cuffs to all out scuffles. A male's position in the resulting hierarchy determines his access to food, shady resting places and females.

Quokkas are nocturnal creatures that rest in groups during the day. As night falls, they fan out across their marshy or scrubby habitat searching for swamp peppermint and other plants. At about midnight, the animals stop foraging but continue eating, chewing one leaf at a time, until the sun rises.

Quokkas are remarkably unafraid of humans. On Rottnest, they have been known to break into homes and steal food. The animals can be approached so closely that they regularly nip the fingertips of children who get too close. (The island's infirmary reported 60 quokka bites last year.) Even on the mainland, where the creatures are scarce and shyer, Hayward says he once was pursued by a quokka he was tracking at night: "I heard footsteps approaching," he recalls. "Every time I turned off the telemetry receiver the footsteps would stop. I was terrified. Finally, a little head poked out from behind a bush in front of me and revealed my stalker to be a quokka I called Imelda." 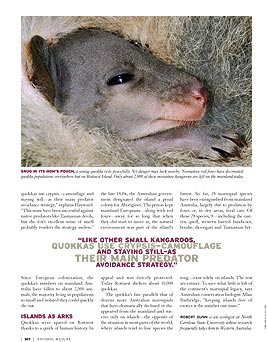 Tasmanian tigers, or thylacines, for example, developed a lifestyle similar to wolves. Marsupial gliders look and act like flying squirrels. Tasmanian devils live like badgers, wombats like groundhogs, and numbats like anteaters. There are 334 surviving marsupial species in the world today, more than 200 of them native to Australia and islands north of the continent. Except for the Virginia opossum--North America's only marsupial--the rest inhabit South America.

Fossil deposits suggest that when De Vlamingh arrived, quokkas were found throughout southwestern Australia in patches of early successional swamp shrublands, areas recently burned by natural fires. According to historical writings, the animals were still widespread and abundant when Europeans colonized the region in the early 1800s, but a century later their numbers had declined dramatically. Though quokkas were hunted and lost large swaths of habitat--to farming, mining and, especially, human changes to normal fire regimes--the biggest culprit was the nonnative red fox, deliberately introduced in the 1930s for hunting.

"Like other small kangaroos, quokkas use crypsis--camouflage and staying still--as their main predator avoidance strategy," explains Hayward. "This must have been successful against native predators like Tasmanian devils, but the fox's excellent sense of smell probably renders the strategy useless." Since European colonization, the quokka's numbers on mainland Australia have fallen to about 2,000 animals, the majority living in populations so small and isolated they could quickly die out.

Islands as Arks
Quokkas were spared on Rottnest thanks to a quirk of human history. In the late 1830s, the Australian government designated the island a penal colony for Aborigines. The prison kept mainland Europeans--along with red foxes--away for so long that when they did start to move in, the natural environment was part of the island's appeal and was fiercely protected. Today Rottnest shelters about 10,000 quokkas.

The quokka's fate parallels that of dozens more Australian marsupials that have dramatically declined or disappeared from the mainland and survive only on islands--the opposite of the situation in most parts of the world, where islands tend to lose species the fastest. So far, 28 marsupial species have been extinguished from mainland Australia, largely due to predation by foxes or, in dry areas, feral cats. Of those 28 species, 9--including the eastern quoll, western barred bandicoot, boodie, djoongari and Tasmanian bettong--exist solely on islands. The rest are extinct. To save what little is left of the continent's marsupial legacy, says Australian conservation biologist Allan Burbridge, "keeping islands free of exotics is the number one issue."

Robert Dunn is an ecologist at North Carolina State University whose research frequently takes him to Western Australia.