The Shrinking World of Penguins 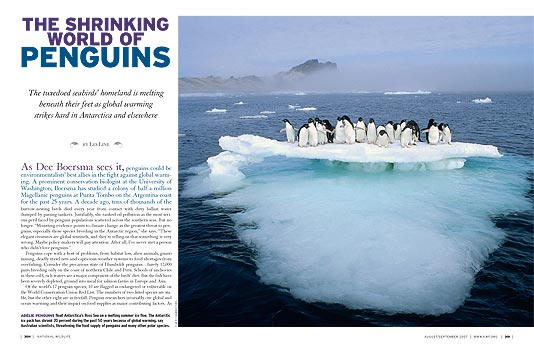 AS DEE BOERSMA sees it, penguins could be environmentalists’ best allies in the fight against global warming. A prominent conservation biologist at the University of Washington, Boersma has studied a colony of half-a-million Magellanic penguins at Punta Tombo on the Argentina coast for the past 25 years. A decade ago, tens of thousands of the burrow-nesting birds died every year from contact with dirty ballast water dumped by passing tankers. Justifiably, she ranked oil pollution as the most serious peril faced by penguin populations scattered across the southern seas. But no longer.

“Mounting evidence points to climate change as the greatest threat to penguins, especially those species breeding in the Antarctic region,” she says. “These elegant creatures are global sentinels, and they’re telling us that something is very wrong. Maybe policy-makers will pay attention. After all, I’ve never met a person who didn’t love penguins.”

Penguins cope with a host of problems, from habitat loss, alien animals, guano mining, deadly trawl nets and capricious weather systems to food shortages from overfishing. Consider the precarious state of Humboldt penguins—barely 12,000 pairs breeding only on the coast of northern Chile and Peru. Schools of anchovies in these cold, rich waters are a major component of the birds’ diet. But the fish have been severely depleted, ground into meal for salmon farms in Europe and Asia.

Of the world’s 17 penguin species, 10 are flagged as endangered or vulnerable on the World Conservation Union Red List. The numbers of two listed species are stable, but the other eight are in freefall. Penguin researchers invariably cite global and ocean warming and their impact on food supplies as major contributing factors. As Falklands conservationist Mike Bingham writes, “Breeding colonies rely on highly productive feeding areas within their daily foraging range [and] any reduction in food abundance will have adverse effects on chick-rearing.”

Rockhopper penguin numbers on New Zealand’s Campbell Island, for example, plummeted from 1.6 million breeding pairs in the 1940s to around 100,000 pairs by 1985, and the population has never bounced back. Scientists blame the decline on rising sea temperatures, which reduce the oxygen levels necessary for the penguin’s marine-invertebrate prey to reproduce. 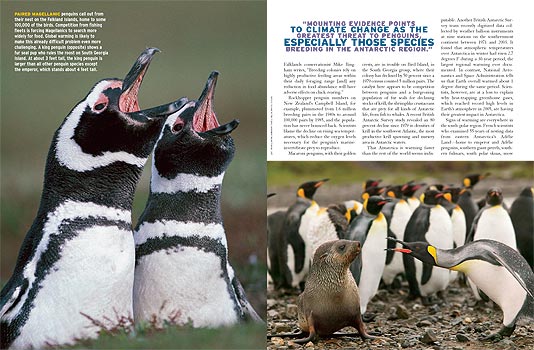 Macaroni penguins, with their golden crests, are in trouble on Bird Island, in the South Georgia group, where their colony has declined by 50 percent since a 1979 census counted 5 million pairs. The catalyst here appears to be competition between penguins and a burgeoning population of fur seals for declining stocks of krill, the shrimplike crustaceans that are prey for all kinds of Antarctic life, from fish to whales. A recent British Antarctic Survey study revealed an 80 percent decline since 1979 in densities of krill in the southwest Atlantic, the most productive krill spawning and nursery area in Antarctic waters.

That Antarctica is warming faster than the rest of the world seems indisputable. Another British Antarctic Survey team recently digitized data collected by weather balloon instruments at nine stations on the southernmost continent between 1971 and 2003. It found that atmospheric temperatures over Antarctica in winter had risen 2.7 degrees F during a 30-year period, the largest regional warming ever documented. In contrast, National Aeronautics and Space Administration tells us that Earth overall warmed about 1 degree during the same period. Scientists, however, are at a loss to explain why heat-trapping greenhouse gases, which reached record high levels in Earth’s atmosphere in 2005, are having their greatest impact in Antarctica.

Signs of warming are everywhere in the south-polar region. French scientists who examined 55 years of nesting data from eastern Antarctica’s Adélie Land—home to emperor and Adélie penguins, southern giant petrels, southern fulmars, south polar skuas, snow petrels, Antarctic petrels, Cape petrels and Wilson’s storm petrels—report that global warming has led penguins and other seabirds to arrive an average of nine days later than in 1950 to set up territories, court and lay eggs. The study attributes the delay mainly to dwindling stocks of krill and other marine life that force penguins and their polar neighbors to spend more time building up reserves necessary for breeding.

The impact of warming on Antarctic seabirds is all about the sea ice that encircles the continent year-round. The 10-foot thick ice pack covers 7 million square miles—an area the size of Russia—in winter, melting to 1.5 million square miles in summer. Winter sea ice provides critical spawning and nursery areas for krill, which feed on microscopic algae growing on the underside of the ice. This ice pack has shrunk 20 percent during the past 50 years because of global warming, according to Australian scientists who traced ice patterns in the Southern Ocean as far back as 1840. When the ice melts earlier, less food is available for krill, yielding “profound implications for the Southern Ocean food web,” says Angus Atkinson of the British Antarctic Survey. 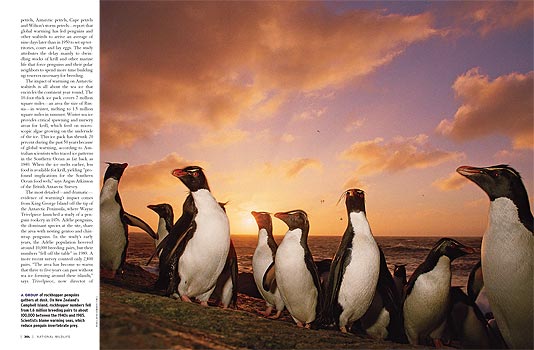 The most detailed—and dramatic—evidence of warming’s impact comes from King George Island off the tip of the Antarctic Peninsula, where Wayne Trivelpiece launched a study of a penguin rookery in 1976. Adélie penguins, the dominant species at the site, share the area with nesting gentoo and chinstrap penguins. In the study’s early years, the Adélie population hovered around 10,000 breeding pairs, but their numbers “fell off the table” in 1989. A more recent survey counted only 2,400 pairs. “The area has become so warm that three to five years can pass without sea ice forming around these islands,” says Trivelpiece, now director of Antarctic seabird research for the National Oceanic and Atmospheric Administration. “No ice means no young krill. And the probability that young penguins will be able to find enough food to survive three years at sea before returning to breed is less than 20 percent. That’s driving the decline.”

The story of emperor penguins, stars of the popular documentary film March of the Penguins, and their interaction with sea ice is even more complex. Emperor penguins, the British Antarctic Survey’s John Croxall wrote, “are justly celebrated for their unique adaptations for survival under the most demanding conditions of any polar bird. They breed throughout the Antarctic winter (mainly feeding on small fish but also squid and krill) so that their chicks can fledge before the ice on which their colonies are situated breaks up.”

In the 1970s, during an abnormally warm period lasting several years, the emperor penguin colony on Adélie Land, where the film was shot, crashed to half its former size. French scientists believe adult mortality rates soared then because of the loss of pack ice in the birds’ foraging area. Receding sea ice, moreover, may explain why the population has never recovered. The world’s largest penguins haul out on pack ice to molt in mid-summer. If they have to swim too far to find a refuge that will not break up during the three- to four-week molting period, adults and juveniles die at sea. Indeed, Dee Boersma visited the French Antarctic base last December and reports that a big storm in September 2006, toward the end of the austral winter, blew all the ice out to sea. “The emperor chicks went with the ice, but they couldn’t survive as they didn’t have their feathers grown.” 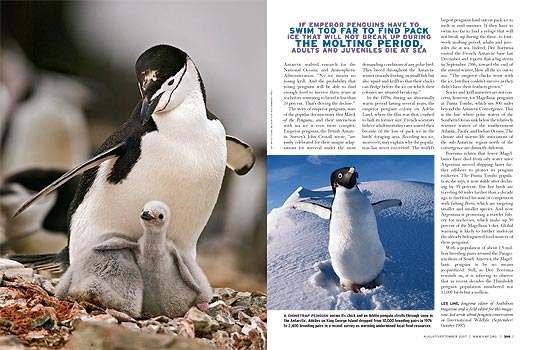 Sea ice and krill nurseries are not concerns, however, for Magellanic penguins at Punta Tombo, which sits 800 miles beyond the Antarctic Convergence. This is the line where polar waters of the Southern Ocean sink below the relatively warmer waters of the southernmost Atlantic, Pacific and Indian Oceans. The climate and marine-life associations of the sub-Antarctic region north of the convergence are distinctly different.

Boersma relates that fewer Magellanics have died from oily water since Argentina moved shipping lanes farther offshore to protect its penguin rookeries. The Punta Tombo population, she says, is now stable after declining by 35 percent. But her birds are traveling 60 miles farther than a decade ago to find food because of competition with fishing fleets, which are targeting smaller and smaller species. And now Argentina is promoting a trawler fishery for anchovies, which make up 50 percent of the Magellanic’s diet. Global warming is likely to further undercut the already beleaguered food sources of these penguins.

With a population of about 1.5 million breeding pairs around the Patagonia shore of South America, the Magellanic penguin is by no means jeopardized. Still, as Dee Boersma reminds us, it is sobering to observe that in recent decades the Humboldt penguin population numbered not 12,000 birds but a million.

Les Line, longtime editor of Audubon magazine and a field editor for this magazine, last wrote about penguin conservation in International Wildlife (September/October 1997).