Why Do Animals Age?

Scientists studying wild creatures, from turtles and terns to bats and parakeets, are coming up with answers that may help humans stave off some of aging's most devastating effects 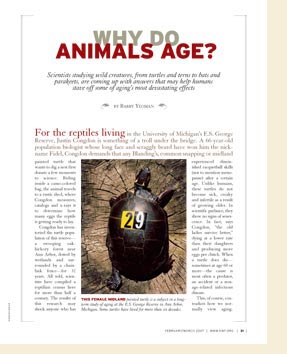 FOR THE REPTILES living in the University of Michigan's E.S. George Reserve, Justin Congdon is something of a troll under the bridge. A 66-year-old population biologist whose long face and scraggly beard have won him the nickname Fidel, Congdon demands that any Blanding's, common snapping or midland painted turtle that wants to dig a nest first donate a few moments to science. Riding inside a camo-colored bag, the animal travels to a rustic shed, where Congdon measures, catalogs and x-rays it to determine how many eggs the reptile is getting ready to lay.

Congdon has inventoried the turtle population of this reserve--a swooping oak- hickory forest near Ann Arbor, dotted by wetlands and surrounded by a chain-link fence--for 32 years. All told, scientists have compiled a reptilian census here for more than half a century. The results of this research may shock anyone who has experienced diminished racquetball skills (not to mention meno-pause) after a certain age. Unlike humans, these turtles do not become sick, creaky and infertile as a result of growing older. In scientific parlance, they show no signs of senescence. In fact, says Congdon, "the old ladies survive better," dying at a lower rate than their daughters and producing more eggs per clutch. When a turtle does die--sometimes at age 60 or more--the cause is most often a predator, an accident or a non-age-related infectious disease. This, of course, contradicts how we normally view aging. "Senescence theory says old ladies are going to do everything worse than young ladies," Congdon says. "Eventually their systems will fail, and physical vigor will fail, and they'll get arthritis, and they won't be able to eat as well, and they won't be able to regenerate." But Congdon and other scientists have begun toppling some of our most basic assumptions about the aging process--and have done so by studying animals in the wild. 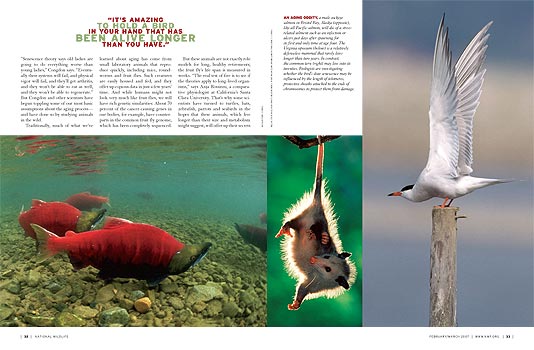 Traditionally, much of what we've learned about aging has come from small laboratory animals that reproduce quickly, including mice, roundworms and fruit flies. Such creatures are easily housed and fed, and they offer up copious data in just a few years' time. And while humans might not look very much like fruit flies, we still have rich genetic similarities: About 70 percent of the cancer-causing genes in our bodies, for example, have counterparts in the common fruit fly genome, which has been completely sequenced.

But these animals are not exactly role models for long, healthy retirements; the fruit fly's life span is measured in weeks. "The real test of fire is to see if the theories apply to long-lived organisms," says Anja Rossinni, a comparative physiologist at California's Santa Clara University. That's why some scientists have turned to turtles, bats, zebrafish, parrots and seabirds in the hopes that these animals, which live longer than their size and metabolism might suggest, will offer up their secrets to those of us who crave a bit less mortality. This is particularly true of animals that, like Congdon's turtles, have slow or negligible senescence.

"It could be that there are some common anti-aging adaptations on the molecular level that these animals have in common," says Donna Holmes, an evolutionary biologist at Washington State University. If that's true, the findings could potentially lead to new medical treatments for a whole range of human age-related ailments, from eyesight loss to Alzheimer's disease.

Some of this research, like Congdon's, is purely demographic. Other scientists dig deep into the cells. In Spain, for example, Gustavo Barja of Complutense University has been studying the role of "reactive oxygen species" (ROS), unstable molecules formed during the normal course of energy production by cells. ROS degrade some of the large molecules in our bodies, including our DNA, through the process of oxidation--in effect, rusting away our cells. Comparing long-lived parakeets called budgerigars to mice, Barja's research team has discovered that the birds' mitochondria--their cellular power plants--produce ROS at a much lower rate than those of rodents. Working in Minnesota, Anja Rossinni has obtained similar results for little brown bats, which live up to 34 years. 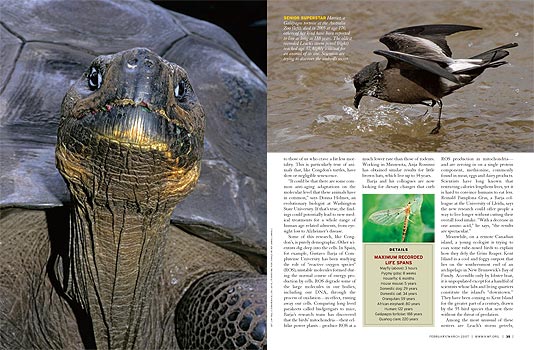 Barja and his colleagues are now looking for dietary changes that curb ROS production in mitochondria--and are zeroing in on a single protein component, methionine, commonly found in meat, eggs and dairy products. Scientists have long known that restricting calories lengthens lives, yet it is hard to convince humans to eat less. Reinald Pamplona Gras, a Barja colleague at the University of Lleida, says the new research could offer people a way to live longer without cutting their overall food intake. "With a decrease in one amino acid," he says, "the results are spectacular."

Meanwhile, on a remote Canadian island, a young ecologist is trying to coax some tube-nosed birds to explain how they defy the Grim Reaper. Kent Island is a cool and foggy outpost that lies on the southernmost end of an archipelago in New Brunswick's Bay of Fundy. Accessible only by lobster boat, it is unpopulated except for a handful of scientists whose labs and living quarters constitute the island's "downtown." They have been coming to Kent Island for the greater part of a century, drawn by the 55 bird species that nest there without the threat of predation.

Among the most unusual of these nesters are Leach's storm petrels, underground burrowers that emerge en masse at night, when they feed on plankton, fish and crustaceans and fill the sky with their trumpetlike calls. The petrels' most outstanding trait, though, is not their nocturnal lifestyle, but their longevity: The oldest recorded individuals have clocked in at 37 years old, which is extraordinary for an animal the size of a robin. "It's amazing to hold a bird in your hand that has been alive longer than you have," says Mark Haussmann, a physiological ecologist at Ohio's Kenyon College who works on Kent Island.

At 31, boyish-looking and curly-haired, Haussmann is indeed younger than the oldest Leach's storm petrels. But he has already conducted some of the most revealing research into why some bird species outlive our expectations. On Kent Island, Haussmann and his student assistants briefly pull petrels from their burrows and prick a prominent vein with a thin needle to get a few drops of blood. He extracts DNA and eventually isolates telomeres, protective sheaths at the ends of chromosomes that protect genetic information from damage. (Haussmann compares them to the plastic end-caps that keep our shoelaces from unraveling.) Like many of his colleagues, Haussmann believes telomeres hold some of the keys to aging--not just in birds, but also in humans. As long as telomeres stay intact, our cells can happily go about their everyday business of growth, maintenance and repair. Every time a healthy cell divides, though, the telomeres shrink a little. When they get too short, they shut off the cells' ability to divide any further. This has a lifesaving purpose: By restricting the number of times cells can split, telomeres protect those cells from the willy-nilly growth that leads to cancer. But there's a trade-off: Once a cell can no longer divide, it loses the ability to repair itself. This leads to cell damage and eventually death. 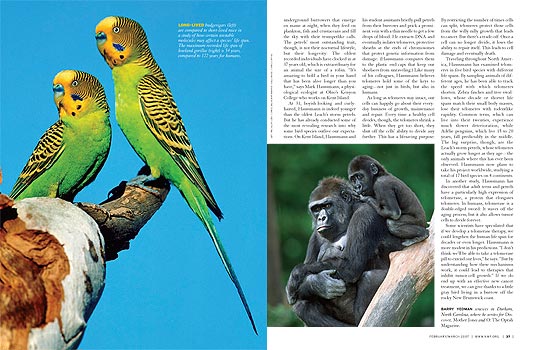 Traveling throughout North America, Haussmann has examined telomeres in five bird species with different life spans. By sampling animals of different ages, he has been able to track the speed with which telomeres shorten. Zebra finches and tree swallows, whose decade or shorter life spans match their small body masses, lose their telomeres with rodentlike rapidity. Common terns, which can live into their twenties, experience much slower deterioration, while Adélie penguins, which live 15 to 20 years, fall predictably in the middle. The big surprise, though, are the Leach's storm petrels, whose telomeres actually grow longer as they age--the only animals where this has ever been observed. Haussmann now plans to take his project worldwide, studying a total of 17 bird species on 4 continents.

In another study, Haussmann has discovered that adult terns and petrels have a particularly high expression of telomerase, a protein that elongates telomeres. In humans, telomerase is a double-edged sword: It staves off the aging process, but it also allows tumor cells to divide forever.

Some scientists have speculated that if we develop a telomerase therapy, we could lengthen the human life span for decades or even longer. Haussmann is more modest in his predictions. "I don't think we'll be able to take a telomerase pill to extend our lives," he says. "But by understanding how these mechanisms work, it could lead to therapies that inhibit tumor-cell growth." If we do end up with an effective new cancer treatment, we can give thanks to a little gray bird living in a burrow off the rocky New Brunswick coast.

Barry Yeoman senesces in Durham, North Carolina, where he writes for Discover, Mother Jones and O: The Oprah Magazine.

Among researchers who study aging, one long-accepted maxim is that, at least for mammals, the bigger you are the longer you live. The explanation has been that smaller mammals have higher metabolic rates, resulting in the release of more cell-damaging free radicals--oxygen atoms produced during metabolism--than mammals that burn energy at a lower rate.

In recent years, however, scientists have uncovered an increasing number of exceptions to this "live fast, die young" rule. It turns out that several groups of animals, including birds, porcupines and bats, live longer than similar-sized creatures with similar metabolic rates--and longer than would be expected based on their sizes.

Meanwhile, evidence against the role of free radicals in the aging process was presented at a recent American Physiological Society meeting. Rochelle Buffenstein of The City College of New York and her colleagues reported their discovery that the naked mole rat, with a lifespan of 28 years, suffers more damage from these oxygen atoms than the mouse, which is about the same size and has a lifespan of just 3 years. The mole rat "seems like the perfect model to provide answers about how we age and how to retard the aging process," says Buffenstein. "This animal may one day provide the clues to how we can significantly extend life."--Laura Tangley